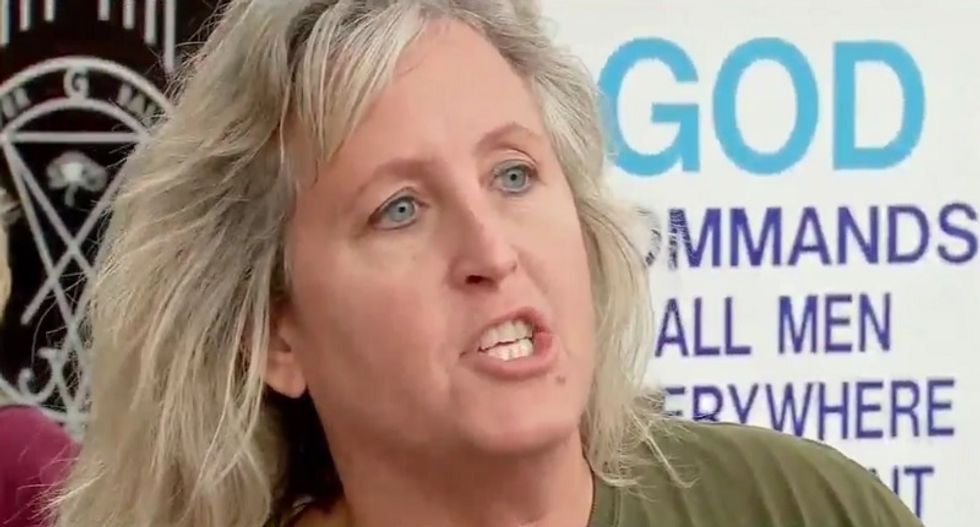 Christians in Spring, Texas, appear to be trying to run the Church of Lucifer out of town, ABC13 reports.

The Luciferians officially opened their doors on Friday, with their first meeting scheduled for Saturday. But they were greeted by a vocal group of Christians after having their building vandalized this week. Video taken by ABC13 Friday evening shows protesters upset with the organization's presence gathered outside, with a law enforcement presence needed to keep the peace.

"This is what we get when we have freedom of religion," protester Christine Weick told ABC13 angrily. "We ought to be filling up the whole street here, that they have to pass through us to get into that church."

White continued to say that God loves the Luciferians "enough to say, 'you either bow now, or you will be forced to bow later,' and then it's too late."

The church had been vandalized ahead of its opening. Someone with a chainsaw hacked off a large tree branch and sent it crashing into the building's roof, KHOU reports.

"We have an absolute right to be here, legally," Greater Church of Lucifer co-president Michael Ford told RT. "I always feel sorry for so-called Christians who feel so insecure in their belief that they have to come out here and waste their time when they're not going to change our mind, and we're not going to change theirs."

Ford said the organization is philosophical and their "services" are more of a meeting of minds. There is no devil worship or animal sacrifice that takes place, and they have no intention of converting anyone.

"They just believe that that's what happens. That's what they spew," he told ABC13.

One sign held by protesters read, "Mary Queen of the Angels crush Lucifer's head!" Another read, "We are one nation under God and Satanism is NOT an American value." A woman bellows that, "Jesus is calling on your today!"

Despite the less-than-warm welcome, the organization said on its Facebook page that its opening was successful with plans to hold its first meeting still scheduled for Saturday.

"I have to say that we as a group lead by example," church member Jacob No wrote. "We [were] the ones who handled all adversity at hand with perfection and respect."

It's not the first time people following the philosophical, historical and literary figure of what Christians believe to be the fallen angel Lucifer have faced violence.

In July, the Satanic Temple had to move the unveiling of its Baphomet statue to a secret location in Detroit after Christians there made threats that they would blow it up.

Both the Church of Lucifer and Satanic Temple do not worship a supernatural devil figure, but instead follow tenets that resemble those of humanism.