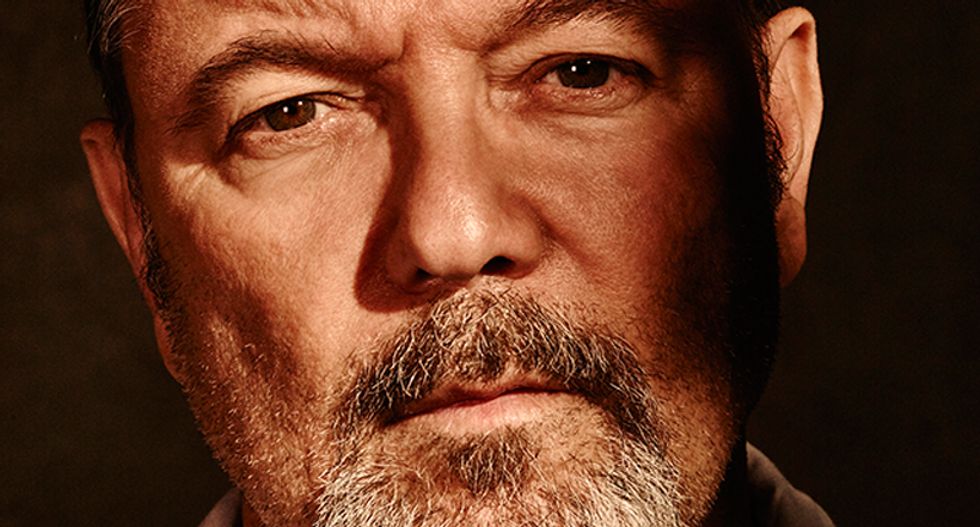 I had gotten into “FTWD” because it answered some questions raised by watching the original show. And besides, who doesn’t want to see Los Angeles in particular swarmed by zombies? Then I abruptly blew off the spin-off. Why? Because the show did one thing I cannot forgive: It positively dramatized the false notion that "torture works." Torturing people, we learn, apparently produces useful results.

In the “Cobalt” episode, the character Daniel Salazar, played by Rubén Blades, is an immigrant from El Salvador who long ago was damaged by his contact with US-supported Salvadoran death squads; he has been imprinted with a dormant cruelty which emerges under the stress of the strolling corpse apocalypse. Fair enough --the US government for decades trained death squads in Latin America, and the show points out that latent violence can emerge as a kind of vicious karma amidst social chaos. So in a way it’s our fault, yours and mine, that Salazar used his daughter to lure Adams into his clutches, our fault he’s got the guy bound to a chair -- our fault he’s digging a knife deep into the corporal’s limbs. That’s not unreasonable in itself. Horrors of all kinds, not limited to flesh eating zombies, would arise in a scenario like this. Humanity’s ever-present real life monsters would slither out from under every slimy rock. That would include torture. I get that, too.

But, if you have to dramatize something as miserable as torture, then dramatize it realistically: show just how hideous and counter-productive it is. “But that’s what we’re doing!” the production might claim. “It’s depicted as a horrible, deplorable thing!” No--not the way you did it, not from the “bigger picture” point of view. You portrayed it in a way that advanced your story conveniently and gave no thought to the real issue. When you perpetuate the myth that torture works, you’re perpetuating torture itself.

Salazar gets exactly the information that he and his companions need by torturing the soldier with a nastily sharp blade. He learns all about Operation Cobalt. He finds out from the soldier, after he’s tortured him, exactly what it is. And this is vital information for our heroes to have. So the production company of FEAR THE WALKING DEAD, the writers and producers, are in effect saying that torture works.

It doesn’t help that we’re repelled by Salazar’s use of torture. It doesn’t help that his resorting, rather eagerly, to torture will have bad consequences later. The “public disservice announcement” is still there -- the implicit assumption that torture is effective in producing useful data, and in terrible extreme circumstances, you’re just going to have to go for it.

That’s not drama. That’s taking a hard-right, beyond "conservative" position: it's okay to dig knives deeply into people, torture them, for a specious “greater good”.

I’m aware that, going way back, entertainment tough guys have had a tendency to “beat the truth out” of bad guys; this endearing proclivity was taken to notorious extremes in the show “24.” Never mind that Adams, here, is not a bad guy. Either way, torture is a social sickness.

“24” has been called on use of brutal interrogation and, on the whole, I thought we’d learned better. Because the facts have come out. Studies have been made; squirming CIA “experts” have been probed, and as a society we have finally admitted that torture does not work.

In recent years, studies after study, paper after paper, assert that torture does not actually provide good information. The consensus was capped by last year’s Senate report on the CIA’s detention and interrogation program, which concluded that, surprise, torture does not work. The CIA tried to hide this basic truth, for a while---which just shows how much the myth of torture’s value is a part of the hardliner’s culture.

What does work in interrogation is confronting captured assets with proven facts, gaining their trust, shifting their orientation ideologically. Physical coercion is simply not effective. Yet it goes on, around the world:

Since launching its Stop Torture campaign in May 2014, Amnesty International has issued reports on torture in Mexico, Morocco, Nigeria, the Philippines and Uzbekistan. The reports show that torture is a frequent event in these countries, while the perpetrators of torture continue to enjoy impunity for their crimes.

So clearly, the use of torture could crop up again under the auspices of the United States, with just a change of administrations. Would Donald Trump or, good Lord, Carly Fiorina, hesitate to endorse it? The “Cobalt” episode of FEAR THE WALKING DEAD makes it fairly obvious that the fundamental myth about torture, “torture works,” is still extent here in the good old US of A.

Even if torture did occasionally provide good information in real life, you’d still be wrong to characterize it in that way in television drama. You’re still effectively recommending torture to millions of minds unconsciously soaking up these ideas. Zombies aren’t real, people aren’t going to believe in them, unconsciously or not. But they know torture is real.

It’s not as if the characters in the “Cobalt” episode had run through all the other options. The writers could have dramatized torture and simply have the torture fail. Then you have your intact message about social karma and hidden levels of inner violence. And the critical “Operation Cobalt” information our heroes needed would have come from someone else, in a some other more inventive, dramatically interesting way.

But, not only did the torturer get the info he needed in “Cobalt”, one of the heroes of the show, loving mommy Madison Clark (played by Kim Dickens) was basically okay with a guy shrieking and pleading behind a locked door in her house, since it was supposedly useful to her family. Madison went shruggingly along with extreme, extended torture; if not cheerfully, then with no real hesitation. So that's two votes for torture, in this episode, including one from Madison, who is basically the show’s protagonist. The worst vote, though, is the third one -- the vote for torture from the producers of FEAR THE WALKING DEAD...

My core concern is that this episode of the popular WALKING DEAD spin-off is helping spread the myth that torture works, and it's spreading it to a big audience. And that particular myth can help justify torture in the minds of interrogators...and politicians. And in the minds of people who vote for politicians.

Media Opinion
Report typos and corrections to: corrections@rawstory.com.
Like this article ? Text `Support` to 50123 to donate.
READ COMMENTS - JOIN THE DISCUSSION