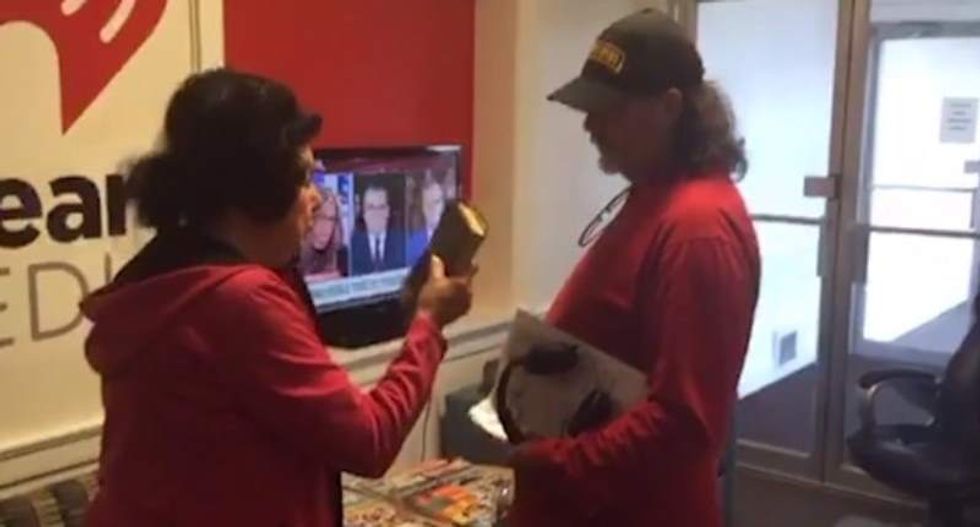 A perennial fringe mayoral candidate in Toledo, Ohio can be seen speaking in tongues after an interview with WIOT-FM.

The footage shows 75-year-old Opal Covey holding up her copy of the Bible and telling Fred LeFebvre, "I don't know what God is going to do."

"I have no idea what he's gonna do either," he replies. "None of us know."

"But you are comin' up against the works of the Lord," she tells him. "And you're not accepting it, and you're doing retaliation on me. Of course you are."

"I'm not doing retaliation," LeFebvre says. "Just want you to get specific about how you're gonna do these things your lawyers told you to do."

LeFebvre does not specify what the instructions were from Covey's attorney, but does tell her later that, according to the Bible, she would be a "false prophet" if she failed to beat the other six candidates in the race.

"Right now, because you have called me a false prophet, to my face, I will wipe the dust -- the very dust of my feet -- off against you, as a testimony against you," she shoots back. "And whatever God does, the people will see it. I rebuke you, and I curse the evil spirit within you. What you have done to destroy me this morning shall destroy you."

Covey then begins speaking in tongues before calling LeFebvre an "evil man."

"I don't understand tongues," he says, before she resumes speaking in tongues. At one point, he replies, "kumbaya" while waving his arms before ultimately shooing her out of the station offices.

According to the Toledo Blade, Covey, who describes herself as the "priestess" of her neighborhood, is running for mayor for the fifth time.

She has never received more than 400 votes, but blames "rigged elections" for her lack of success at the polls. Covey is currently running as a Republican, though she was previously registered as a Democrat.

"I have to run until I become mayor," she said. "This is God's plan, for me to be here and to be mayor."

Watch the encounter, as posted by WIOT, below.