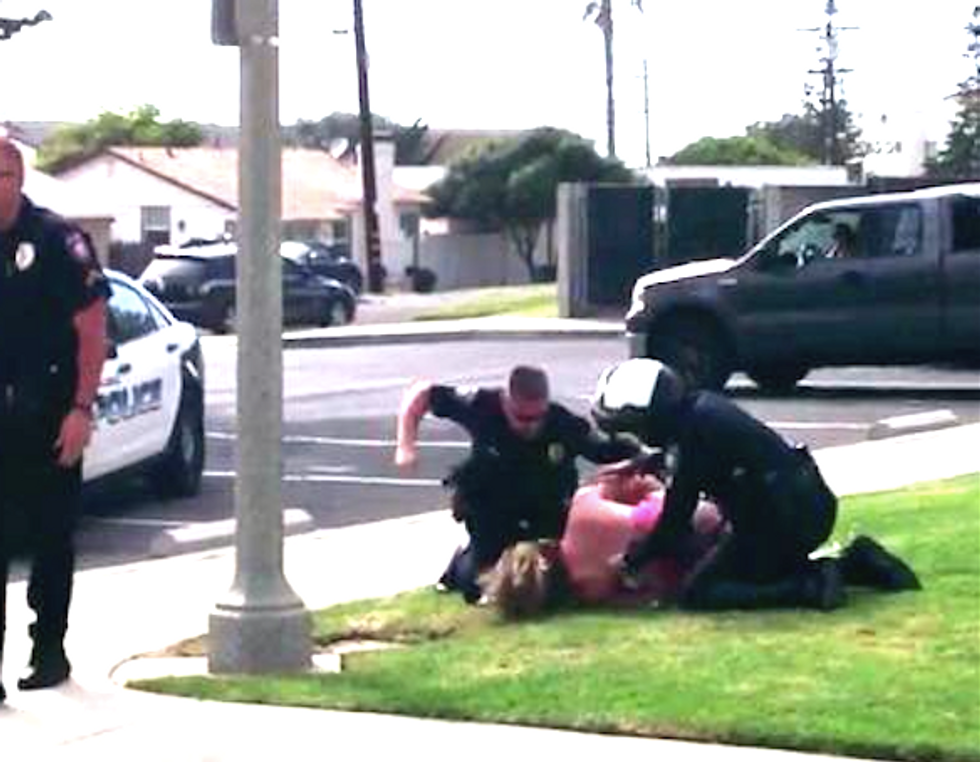 A woman in Carlsbad, California is suing police after an officer punched her in the face while arresting her over an alleged seatbelt violation.

The New York Daily News reported on a police brutality suit brought by 40-year-old Cindy Hahn, who was arrested and beaten in 2013 as her two children, ages 7 and 11, watched.

According to Hahn's complaint, on July 31, 2013, she and her children were leaving a birthday party when they came upon a vehicle which was unoccupied with its alarm blaring.

Police cruisers with their lights flashing surrounded the vehicle, but officers were allowing the alarm to blare. When Hahn -- whose father is a police officer -- asked an officer on duty why police weren't shutting off the car alarm, the officer -- identified in court documents as Officer Kenyatte Valentine -- reportedly told her to mind her "own fucking business."

Hahn used her cell phone to call the police non-emergency line to complain about Officer Valentine's behavior. As she drove away, Valentine pulled her over claiming she wasn't wearing her seatbelt. He and another officer pulled her from the vehicle and pinned her to the ground.

“I can feel hands on me. It’s the weirdest feeling,” Hahn told KCAL-TV.

Valentine repeatedly punched her in the face while subduing her. The incident was caught on video.

Hahn's complaint said that "Ms. Hahn was transported to the emergency room where she was diagnosed with head and brain contusions and subsequently diagnosed with a concussion based on the Defendant Police Officer’s violence. Ms. Hahn suffers permanent memory loss and brain trauma as well as other physical and emotional injuries from the beating."

"We are prepared to provide a complete and detailed account of the facts of this incident in a courtroom, not in the media,” the statement said.

Watch video of the arrest, embedded below:

WARNING: THIS VIDEO CONTAINS GRAPHIC VIOLENCE AND MAY BE UPSETTING TO SOME VIEWERS.