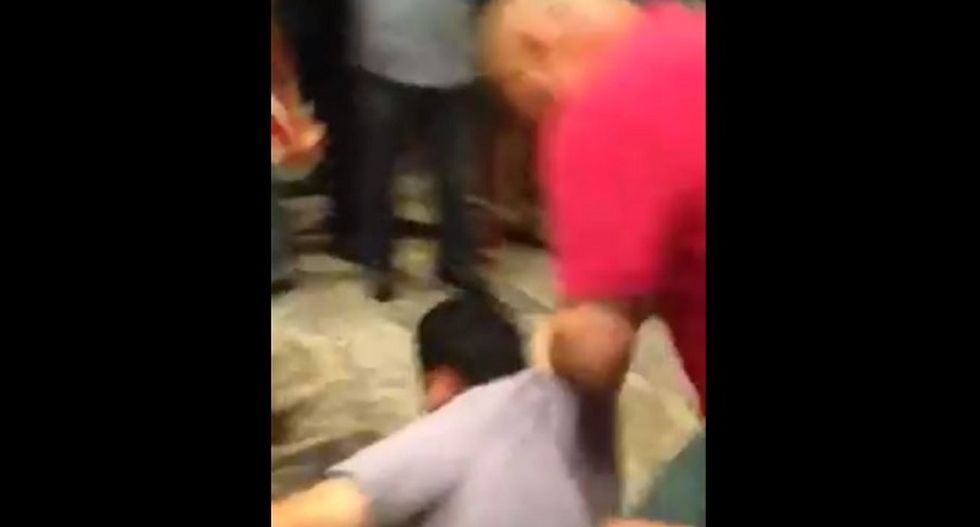 A protester at a Donald Trump rally was violently assaulted by at least one of the billionaire presidential candidate's supporters, and it was caught on video.

The video, posted to Facebook by NBC6, shows protester Ariel Rojas being knocked to the ground and roughly dragged by a Trump supporter at the Miami event as other supporters chant, "USA! USA!"

NBC6 reports Rojas was one of several groups protesting Trump on Friday night at the Trump National Miami Doral Resort. Trump has made public statements against people of Mexican descent and women since launching his campaign. Rojas was holding the letter "Q" in a line-up of demonstrators spelling out the word "Equality."

In the video, a bald man in a red shirt can be seen grabbing Rojas' shirt then yanking him down onto his back and dragging him. Rojas is able sit up briefly after falling but the man kicks him then grabs his shirt again to try and drag him before bystanders intervene. Trump can be heard continuing to talk to the raucous crowd despite the violence.

Rojas and his group are students at Florida International University. He said before he was dragged out, Trump supporters grabbed their signs and tore them up.

Rojas told NBC6 he saw another Trump supporter hit a protester with a sign that read, "The silent majority supports Trump."

"There were some choice moments of irony," he told the station. After being physically assaulted, Rojas and his group were escorted off the property by police.

It's hardly the first time Trump supporters have been violent. Earlier this month a fight broke out at a Trump event when one of his supporters spat in the face of a protester.

In August, two brothers were arrested after brutally beating and urinating on a homeless Latino man. The brothers said their actions were inspired by Trump, who was criticized for failing to condemn them.

Trump had Univision reporters who were trying to cover the Friday event turned away.