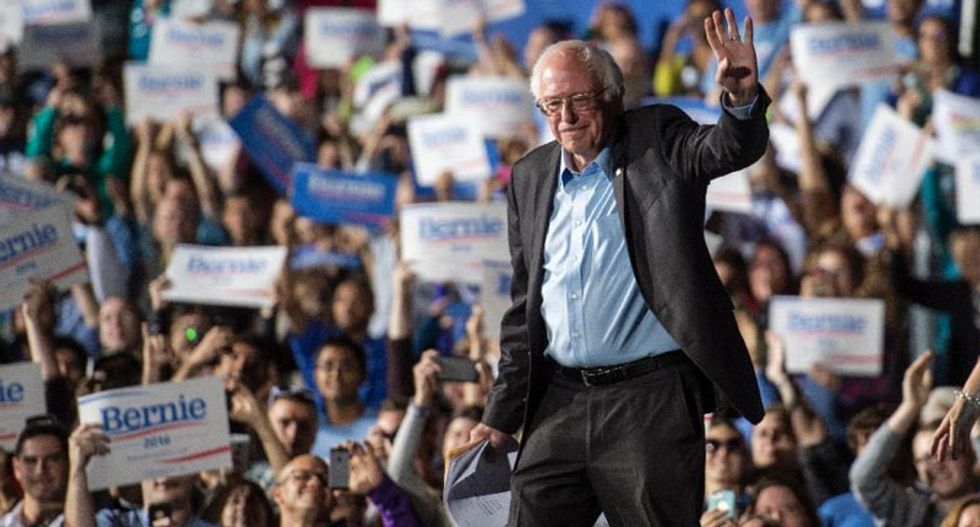 At Tucson rally, Democratic hopeful defends the undocumented – ‘part of the fabric of this country’ – and declares gun violence must be brought to an end

With a Latino congressman’s endorsement, a boy’s heart-rending story and the mellifluous sounds of a mariachi band, Bernie Sanders began a push to woo Hispanic voters at a rally in Arizona on Friday night.

As well as immigration reform, the Democratic presidential hopeful touched on gun control in the wake of last week’s massacre in Oregon and two more fatal shootings on Friday on university campuses in Houston and northern Arizona.

Despite his history of opposing gun regulation , Sanders called for stronger background checks and an end to the easy availability of assault weapons. “We are tired of condolences and we are tired of just prayers. We are tired and we are embarrassed in picking up the paper or turning on the TV and seeing children in elementary schools slaughtered and young people on college campuses shot,” he said.

“I think the vast majority of the American people want us to move forward in sensible ways that keep guns out of the hands of people who should not have them and cut down on these senseless murders that we see every week.”

In a rare moment of common ground with Republicans, Sanders also linked the issue to the need for improved mental health services. “All over this country we have thousands of people who are suicidal, who are homicidal, but they cannot get the help they need when they need it. We need a revolution in mental health delivery in this country,” he said.

As well as his usual discussion of economic inequality, much of the 74-year-old’s speech – delivered in front of a crowd estimated at more than 10,000 at an amphitheatre in central Tucson – focused on immigration, a natural topic given the location and his polling numbers.

Some of the nation’s most virulent anti-immigrant language and lawmaking has emanated from Arizona in recent years, but Tucson is a splash of liberal blue in a largely deep-red state. The city is 70 miles from the border and is 42% Hispanic, according to census figures.

Sanders said earlier in the week that he would be “moving very aggressively” to court Hispanic voters. They made up about 10% of the electorate in 2012 and skew heavily Democratic, the Pew Research Center found .

But they hardly know the US senator from Vermont. In July a Univision poll of Hispanic voters found Sanders was viewed as favourable by 16% of respondents and unfavourable by 16%, with 68% having no opinion. A Gallup poll the following month found Hillary Clinton was the only Democratic candidate widely known and popular among Hispanics. Clinton has a substantial lead over Sanders in the main national polls ahead of the first Democratic presidential debate on 13 October in Las Vegas.

Still, this event once again showcased Sanders’s knack for attracting large, energised crowds. And Raul Grijalva, a local Democratic US representative and member of the Congressional Hispanic Caucus, became the first sitting member of Congress to endorse Sanders this week. In front of a spirited – and, it seemed, mostly white – group, Grijalva explained why.

“Bernie’s my friend and beyond friendship I agree with his values, I agree with the solutions that he is bringing and his campaign is bringing to the American people; and finally it’s way past time that we had a national campaign and a voice that speaks truth to power. Not triangulated in any way: direct, honest, straight, truthful,” he said.

“The campaign’s mission is very simple. It’s about fairness and equality … Fixing an immigration system that is punitive at best and broken at worst.”

Grijalva invited a high school mariachi band to warm up the crowd before Sanders arrived on stage. “I hope this [rally] will excite the Latino population,” said Justin Enriquez, the band’s director. “I think he’s starting to gain a little bit more popularity. Hopefully Tucson will give him a good boost.”

Many in the audience held “We stand with Rosa” banners in reference to Rosa Robles, a Mexican who has taken sanctuary in a Tucson church for 14 months in a bid to avoid deportation.

One of them was her husband, Gerardo Grijalva, who stood by a barrier near the front of the crowd. “Immigration is an issue that really matters to Latinos,” he said. “The more he comes to places like this, the more there’s a lot of talk about immigration, [the better].”

The event also heard from Bobby de la Rosa, a 10-year-old American citizen whose mother left to visit Mexico in 2009 but was banned from returning to the US for a decade , putting immense strain on the family.

Sanders argued for immigration reforms that would prioritise keeping families together and protect the nation’s estimated 11 million undocumented immigrants from deportation. He lambasted GOP candidates including Donald Trump for their rhetoric. “In the year 2015 it is not acceptable to be stooping to racism and demagoguery in order to win some political votes. It is not American to be defining a whole group of people who happen to come from Mexico and calling them criminals and rapists,” he said.

“Today’s undocumented workers play an extraordinarily important role in our economy. Without these workers it is likely that our agricultural system would collapse. Undocumented workers are doing the hardest work in this country, they’re harvesting our crops, building our homes, cooking our meals and caring for our kids. They are part of the fabric of this country.”

“That story is the story of America. It is the story of hardworking families coming into this country to create a brighter future for their children. It is a story rooted in family and fuelled by hope,” he said, as supporters behind him on stage held giant letters spelling out “Viva Bernie”.

Watch video of the full speech below: