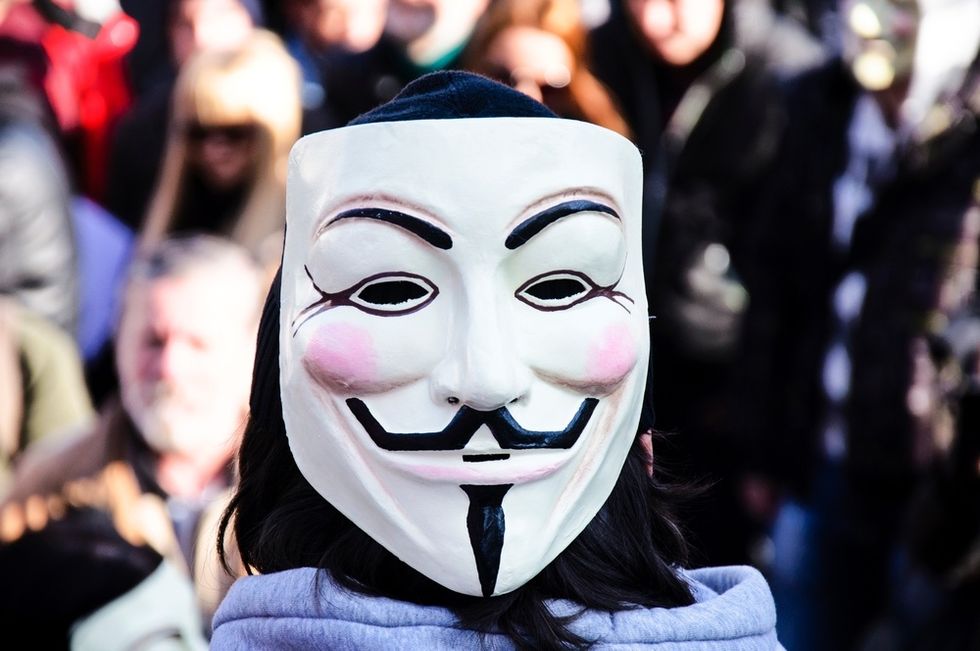 Whenever public protests ignite into violent behaviour, the mainstream media are often quick to refer to “anarchy” and to “anarchists”. Those who are referred to as anarchists are protesters who burn tires or engage in battles with the police. In this narrative, anarchists are lawless hooligans and anarchy is about chaos and pointless violence.

The latest example is the Million Mask March in London on November 5. This event was indeed organised by a number of anarchist groups – and there were limited outbreaks of violence – but the equation of chaos and violence with anarchism is about as productive as the equation of circles with squares. It is a crude and bizarre misrepresentation.

What is anarchism anyway? It is a radical and revolutionary political philosophy and political economy. While there are many definitions and many anarchisms, most would agree to the definition formulated by Peter Kropotkin. This definition is in an article which Kropotkin was invited to write for the 11th edition of the Encyclopædia Britannica.

According to Kropotkin, anarchism: “is a name given to a principle or theory of life and conduct under which society is conceived without government – harmony in such a society being obtained, not by the submission to law, or by obedience to any authority, but by free agreements concluded between the various groups, territorial and professional, freely constituted for the sake of production and consumption, as also for the satisfaction of the infinite variety of needs and aspirations of a civilised being.”

Let’s unpack this a bit. The etymology of the term traces back to the Greek word “anarkhia”, which means “without rulers” or “without authority”. It stands for the absence of domination, hierarchy and power over others.

Anarchism is a process whereby authority and domination is being replaced with non-hierarchical, horizontal structures, with voluntary associations between human beings. It is a form of social organisation with a set of key principles, such as self-organisation, voluntary association, freedom, autonomy, solidarity, direct democracy, egalitarianism and mutual aid.

Based on these principles and values, anarchism rejects both a capitalist economy and a nation state that is governed by means of a representative democracy. It is a utopian project that aspires to combine the best parts of liberalism with the best parts of communism.

At its heart is a mix of the liberal emphasis on individual freedom and the communist emphasis on an equal society. I particularly like the definition of Cindy Milstein about anarchism being a “free society of free individuals”.

The political philosophy of anarchisms emerged in the mid-19th century – as part of the thought of Enlightenment. Key anarchist thinkers include Pierre-Joseph Proudhon, William Godwin, Peter Kropotkin, Mikhail Bakunin, Emma Goldman, and Max Stirner. Proudhon is credited as the first self-proclaimed anarchist and is often seen as the founder of classic anarchist thinking. In particular, he developed the concept of spontaneous order in society, where organisations can emerge without central or top-down coordination.

In fact, Godwin developed his anarchist theory half a century earlier – without ever using the term. His writings are a profound critique of the state and its structural violence, arguing that the state and its government has a bad influence on society in that it produces unwanted dependency. He has also pointed out that law and legislation is created by the rich and powerful. Sound familiar?

However, it is also important to emphasize that most anarchist principles, convictions and moral positions are not at all an invention of modern anarchist theory – they are as old as human civilisation. And due to the rather different political philosophies of liberalism and communism, anarchist theory – like most political ideologies – is not a consistent and homogeneous concept. It evolves as different people articulate its core ideologies in different ways.

We can at least distinguish between two rather different schools: social anarchism and libertarian anarchism (or free market anarchism). While social anarchism puts emphasis on society and often supports a political economy that socialises the means of production, libertarian anarchism is mostly concerned with ensuring the maximum amount of liberty for the individual. Here, the will of the individual is considered to be more important even than a harmonious and egalitarian society.

Over the past two decades or so, anarchist practice has enjoyed a significant revival. This is particularly visible in new social movements that have been influenced by anarchist forms of organisation with horizontal structures and non-representative decision-making processes.

Oscar Wilde, a libertarian anarchist, is widely associated with the following bon mot: “The problem with socialism is that it takes up too many evenings.”

But questions must be raised about the feasibility of anarchist practice. While anarchist organisation clearly can work on a local level, on the level of small communities and on a rural regional level (see the Zapatista movement or large parts of Kurdish rural regions) the jury is still out on whether anarchist social organisation can be embedded in large urban areas, or on a national or global level.

How can forms of direct democracy, such as the general assembly of the Occupy movement, be built and maintained in settings with large populations? At first glance, this seems rather unlikely. Then again, digital technologies might open up new possibilities for large-scale forms of anarchist organisation. Certainly, anarchism is on the rise.

For a non-academic, fictional approach to an understanding of anarchism I would warmly recommend The Dispossessed, a 1970s sci-fi novel by feminist writer Ursula Le Guin.