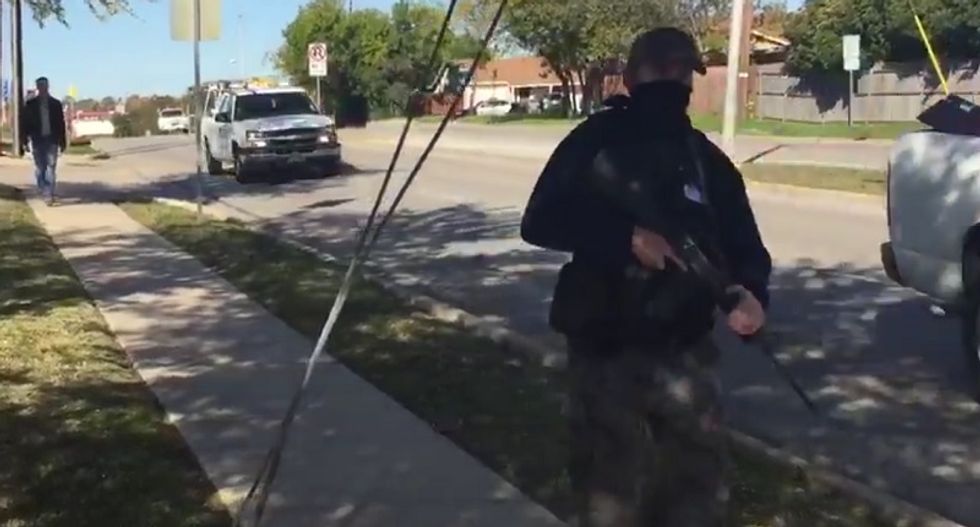 A group of armed protesters who wanted to "show force" gathered outside a Texas mosque Saturday in response to rumors about Syrian refugees and Sharia law.

The group, calling itself the Bureau of American Islamic Relations, stationed itself outside the Islamic Center of Irving carrying signs with messages like, "Stop the Islamization of America," according to the Dallas Morning News. A video taken at the mosque shows a man dressed in black with his face masked carrying a rifle.

The group's leader told the News they were upset because they had heard rumors of a Sharia court at the mosque and the prospect of letting Syrian refugees in. They also claimed members of the local Muslim community had made death threats against Irving's mayor, Beth Van Duyne, earlier this year. The News found no evidence that this claim was true.

When asked by the News why his group was armed, organizer David Wright said the weapons were "mostly for self protection," but then added, "But I’m not going to lie. We do want to show force. We’re not sitting ducks.”

He then added,“We don’t want people to think we’re out to kill people or shoot people. It would be ridiculous to protest Islam without defending ourselves.”

The town of Irving gained notoriety earlier this year when police arrested a Muslim school boy who had made a clock at home and brought it to school, accusing him of making a "hoax bomb."

Van Duyne made a name for herself by fighting against a non-existent threat that Muslims were bringing Sharia law to Irving.

"Recently, there have been rumors suggesting that the City of Irving has somehow condoned, approved or enacted the implementation of a Sharia Law Court in our City. Let me be clear, neither the City of Irving, our elected officials or city staff have anything to do with the decision of the mosque that has been identified as starting a Sharia Court," Van Duyne had written in a Facebook post that was publicized by Fox News and Glenn Beck.

The News reports that police were present and worshippers were instructed by mosque leaders not to interact with the group.

A video of the armed group was posted to Twitter, as seen here: