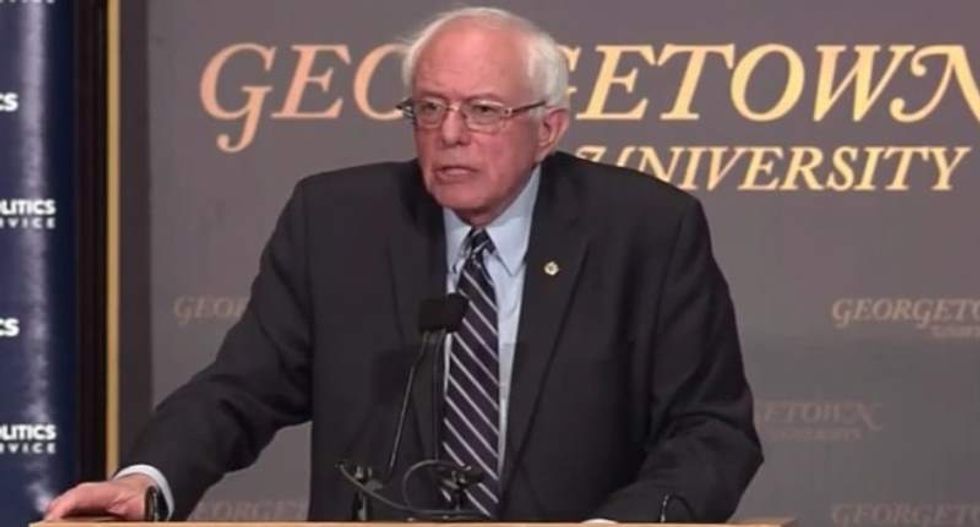 Presidential candidate makes argument for his brand of ‘democratic socialism’ in major speech comparing his ideals to those of FDR, but skimps on foreign policy

Bernie Sanders cast himself as the natural successor to President Franklin D Roosevelt on Thursday in a speech designed to place his “democratic socialism” at the heart of an American political tradition.

Amid fears that the Vermont senator’s insurgent presidential campaign is losing momentum to Hillary Clinton -- who recently ridiculed his support for social programs in Scandinavia by quipping “we are not Denmark” -- Sanders argued it was current free market orthodoxy in the US that was the aberration, while his political philosophy was the authentic face of American democracy, not a radical foreign import.

“I don’t believe in some foreign ‘ism’, but I believe deeply in American idealism,” Sanders told students at Georgetown University in Washington.

“The next time you hear me attacked as a socialist -- like tomorrow -- remember this: I don’t believe the government should take over the grocery store down the street or the means of production,” he explained. “But I do believe that the middle class and the working families who produce the wealth of America deserve a fair deal.”

Sanders urged the enthusiastic young crowd not to grow “cynical” in the face of the flaws of the US political system, arguing there was historic precedent for transformational change.

“Almost everything [Roosevelt] proposed was called ‘socialist’,” he said to huge cheers, arguing voters needed again to be “prepared to take on and defeat a ruling class whose greed is destroying our nation”.

“Against the ferocious opposition of the ruling class of his day, people he called economic royalists, Roosevelt implemented a series of programs that put millions of people back to work, took them out of poverty and restored their faith in government,” he said.

“I know that terms like ruling class are probably not talked about too often here at Georgetown, not too often talked about on CBS and NBC, but that is the simple truth,” added the senator as he departed from prepared speech to deliver one of his most detailed explanations of his political philosophy.

Students queued for hours in the rain to see Sanders speak in what was billed as one of the most important speeches of his 2016 campaign.

Yet despite expectations that the speech would also mark the roll-out of new strategy for fighting Isis, the foreign policy portion of the speech was received in virtual silence and proved much less specific and detailed than the more hawkish version delivered by Clinton earlier on Thursday in New York.

“We must create an organization like Nato to confront the security threats of the 21st century – an organisation that emphasizes cooperation and collaboration to defeat the rise of violent extremism and importantly to address the root causes underlying these brutal acts,” said Sanders in perhaps the most specific policy suggestion.

At times, he sounded much more isolationist than most of his presidential rivals.

“I’m not running to pursue reckless adventures abroad, but to rebuild America’s strength at home. I will never hesitate to defend this nation, but I will never send our sons and daughters to war under false pretense or pretenses or into dubious battles with no end in sight,” said Sanders.

“Our response must begin with an understanding of past mistakes and missteps in our previous approaches to foreign policy. It begins with the acknowledgment that unilateral military action should be a last resort, not a first resort,” he added.

But Sanders also echoed criticism made by Clinton of traditional US allies in the Arabian Gulf.

“Countries in the region like Saudi Arabia, Kuwait, Qatar, UAE -- countries of enormous wealth and resources -- have contributed far too little in the fight against Isis,” said Sanders. “That must change.”

He also sought to join the dots between his economic principles and a foreign policy that many critics have said is comparatively under-developed during the campaign.

“No one understood better than FDR the connection between American strength at home and our ability to defend America at home and across the world.”

Criticized for focusing almost exclusively on economic inequality and initially neglecting the challenge of racism in America, Sanders argued his politics were consistent too with the tradition of civil rights activism.

“What Roosevelt was stating in 1944, what Martin Luther King Jr stated in similar terms 20 years later and what I believe today, is that true freedom does not occur without economic security,” he said.

“Democratic socialism means that we must create an economy that works for all, not just the very wealthy,” concluded Sanders.

The Vermont senator also pushed back at criticism from Clinton and others that his healthcare proposals would burden the middle class with higher taxes, making a rare appeal to corporate interests too.

“Business owners will not have to spend enormous amounts of time worrying about how they are going to provide healthcare for their employees,” he said.

“Workers will not have to be trapped in jobs they do not like simply because their employers are offering them decent health insurance plans. Instead, they will be able to pursue the jobs and work they love, which could be an enormous boon for the economy.”

Despite the focus on FDR and US history, Sanders compared his policies for America with similar experiences abroad and drew specific links to the recent visit of Pope Francis.

“We need to create a culture which, as Pope Francis reminds us, cannot just be based on the worship of money. We must not accept a nation in which billionaires compete as to the size of their super-yachts, while children in America go hungry and veterans sleep out on the streets,” he said.

“Democratic socialism, to me, does not just mean that we must create a nation of economic and social justice. It also means that we must create a vibrant democracy based on the principle of one person one vote. It is extremely sad that the United States, one of the oldest democracies on earth, has one of the lowest voter turnouts of any major country, and that millions of young and working class people have given up on our political system entirely.”

Above all, much of the unusually long speech was devoted to reinforcing Sanders’ belief that his ambition platform for remaking America is both achievable and realistic.

“All of these problems were caused by bad human decisions but if we stand together ... I have no doubt there nothing, nothing, nothing that we cannot accomplish,” he concluded.