Broken treaties, cultural genocide and murder: Here are 5 ways the US has 'given thanks' to Native Americans 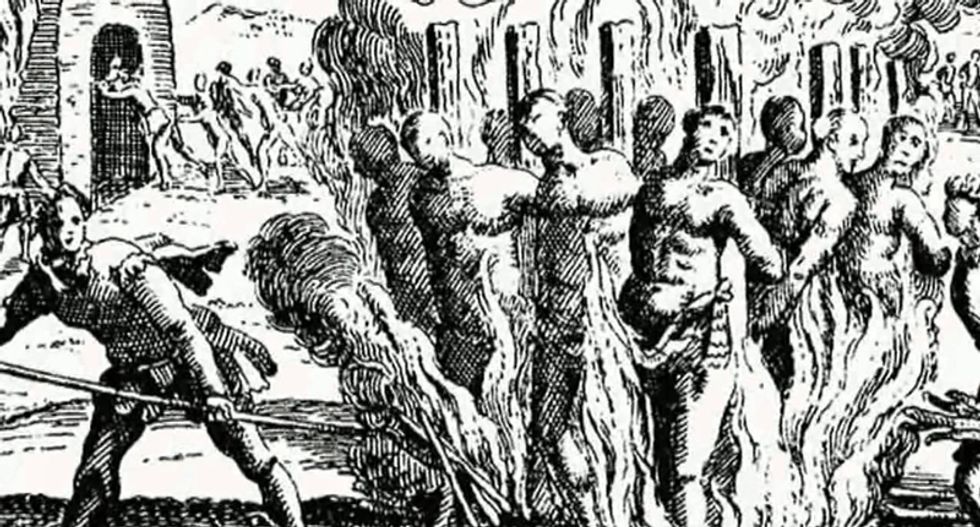 The urban legend about Thanksgiving is that the Native Americans helped save the Pilgrims who had a rough start to their settlements. Once they had a bountiful harvest they invited their Native neighbors over for a nice dinner party to give thanks to them and to God. That story has been soundly refuted by actual accounts of the day, but for reasons passing in understanding, we still celebrate the holiday as we perceive it went down.

After that, however, the friendly relationship between Natives and white settlers was over, and what followed was 300 years of some of the most heartbreaking and disgraceful actions the United States has ever committed.

Everything you know about Thanksgiving is wrong ft. Franchesca "Chescaleigh" Ramsey.

While there are hundreds, here are 5 huge ones: 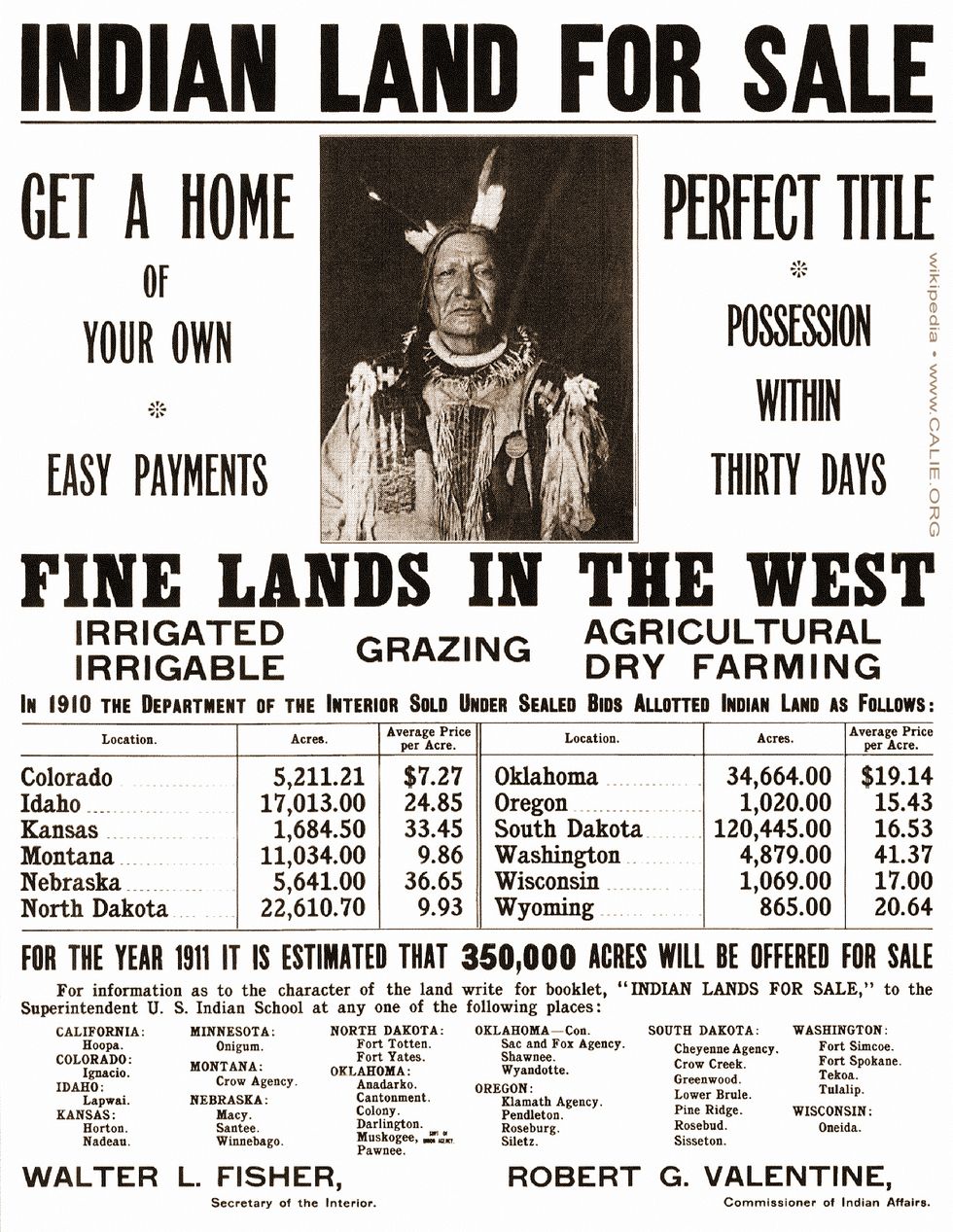 From the day we landed in 1492 until even today, Native Americans are still fighting over land rights.

A Proclamation was signed by King George III of England in 1763, prohibiting any English settlers from pushing further west than the Appalachian Mountains and anyone already there would be required to move back east. Even across the ocean the King knew there were tensions between Natives and settlers. Unfortunately, the King had no real way of enforcing it and 13 years later the Colonies filed the Declaration of Independence and the war with England was on.

One of the worst and most disgusting things happened in the 1829 decision by the Supreme Court in Johnson v. M'Intosh. The court ruled that the U.S. Government could sell Native American land to non-Native people out from under the tribes. Believe it or not, they were actually trying to. (see above)

The decision began a set of rulings under the Marshall Court that outlined what is now referred to as the "Doctrine of Discovery." It's basically a set of western laws that "allowed" the legal framework to take land from aboriginals living on it because it was "discovered" by a European Christian monarchs. The logical conclusion that you can't discover something if someone already lives there was basically thrown out thanks to the Marshall Court.

Who knows why they even bothered with the paperwork, it isn't like they were going to be stopped anyway.

"This emigration should be voluntary, for it would be as cruel as unjust to compel the aborigines to abandon the graves of their fathers and seek a home in a distant land. But they should be distinctly informed that if they remain within the limits of the States they must be subject to their laws..." - President Andrew Jackson, State of the Union 1829

There were plenty of presidents that did horrific things to Native Americans, but for the most part Washington and Jefferson honored the idea of Native sovereignty. President Andrew Jackson did not.

On May 26, 1830 Congress passed the Indian Removal Act which gave the power to the President to "negotiate" the removal of all Native Americans and force them West of the Mississippi River. Jackson signed it into law and the farce of "negotiations" began.

In 1831, Georgia tried to pass a law that prevented Native Americans from being within the borders of their state. In 1833, Florida actually passed the same law. The Cherokees took Georgia to court and demanded an injunction to prevent the forced removal of the tribe from the state. In Cherokee v. Georgia The Supreme Court ruled that the tribal lands were not sovereign and were essentially a ward of the federal government.

You would have thought that the 1832 legal battle would have been the major way that the tribes were saved from governments violating laws and treaties left and right, but no. Jackson proposed to the Cherokees Tribe that they move to Oklahoma (then called Indian Territory). The Cherokee said no.

Jackson didn't care. Between 1830 and 1850 he ordered the forced removal of the Cherokee, Chickasaw, Choctaw, Muskogee, Creek and Seminole people. It was called the Trail of Tears because so many people suffered from death, disease, starvation, exposure and more than 10,000 died on the way.

Natives were considered savages when they fought back against the government attempting to steal their land, kill their people and force them to move. Those that were marched to what is now Oklahoma were considered the "5 Civilized Tribes" because they didn't fight back the way many others did. They agreed to assimilate into some white culture for fear of being killed by the government.

But the U.S. government took it a step further when they started opening up boarding schools where Native children were sent and taught how to be Christian, relinquish their heritage, forget their traditions and act more "white."

Richard Pratt was an Army Officer when he began building the schools that would teach Native children. He said he developed the idea while in "an Indian prison." His philosophy, he described, was simple "Kill the Indian ... Save the Man." By killing the Native American traditions and upbringing in children, they hoped to begin ridding the country of what they considered to be the "savage" behavior.

Many of these children encountered what can only be described as abuse. They were beaten and put in isolation until they'd submit to the ways of white people.

Over 500 treaties were made with Native American tribes over the last several hundred years and over 370 of which had to do with land. All were broken or changed.

As CJ says in the video "How do you keep fighting these smaller injustices when they're all from the mother of injustices?"

From the moment that Columbus "discovered" a place that already existed, Native Americans began to die. Whether from "Old World" diseases like small pox and measles, battles with government soldiers or outright murder, the population declined by 96 percent.

American historian David Stannard argued in his book American Holocaust that the annihilation of the Native Americans from 76 million on both American continents to just a quarter-million "in a string of genocide campaigns," that killed "countless tens of millions" was by far the largest genocide in world history.

“You will do well to try to inoculate the Indians [with smallpox] by means of blankets, as well as to try every other method, that can serve to extirpate this execrable race.”

The intentional use of "germ warfare" to "extirpate this execrable race" is nothing more than brutal, hateful and horrific mass murder. Our country should be ashamed.

Even hundreds of years later, tribes are still fighting many of these same battles. Just last month, the federal government raided a Native American university that was growing a legal hemp crop as part of a pilot project under the Farm Bill.

The Lakota Tribe has been particularly hard hit. They have been fighting to preserve their land against the threat of the Keystone XL pipeline which the tribe argues would have caused an increase in the number of health and safety problems.

They've also had run-ins with local law enforcement and liquor stores that locate just outside dry tribal lands. At the same time their children have experienced appalling and cruel racism and outright assault from fellow South Dakota residents.

What we owe the Native Americans is a more complicated question, but for sure it begins with a greater respect and extends well beyond the limited reparations we've given them over the years. Perhaps it begins with the reclaiming of holidays like Columbus Day and Thanksgiving which have done nothing but perpetuate stereotypes and gloss over the history of violence and broken promises.