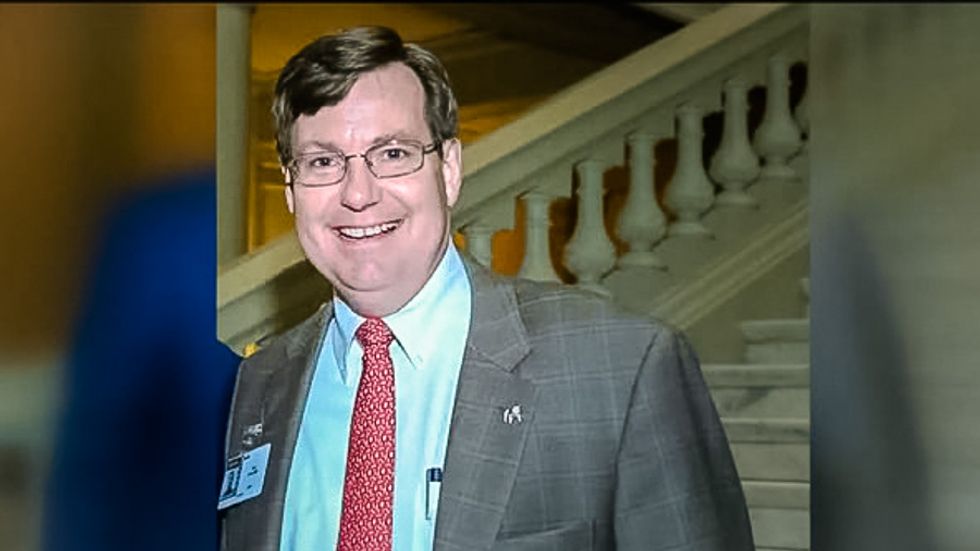 A Republican political consultant from Georgia was sued this week for allegedly forcing boys to perform sex acts and videotaping it.

WSAV reported that attorneys for Matt Stanley filed a lawsuit against Jim Collins for abuse that occurred between from 1996 and 2002 while attending First Baptist Church Vidalia, where Collins was a youth volunteer.

Collins is accused of instructing boys to perform "individual sexual acts, both privately and in a group setting." The lawsuit alleges that he recorded the boys performing the acts at least once while at church. The "highly inappropriate, sexualized physical contact with many of the boys" continued while Collins was chaperoning out-of-town trips, the lawsuit says.

Stanley said that he was abused "more than a hundred times" from the age of 11 until he was 18 years old.

At a press conference on Monday, attorney Jameson Carroll praised Stanley for coming forward to file the lawsuit.

The case was filed under Georgia's updated Georgia Hidden Predator Act, which gives accusers a longer period of time to file complaints.

Although the lawsuit names 50 other organizations which were "negligent" by not protecting the boys, Georgia's laws do not allow churches or businesses to be sued.

According to his LinkedIn profile, Collins is currently employed at Collins Strategy Group, Inc, a software and consulting firm. A bio provided by his previous employer, iSquared Communications, calls Collins "a top political advisor and strategist for new Senate Majority Leader Tommy Williams." It also indicates that he "managed the campaigns for several of the Capitol’s new South Georgia incumbents."

In a statement, the leadership of First Baptist Church said that it was "deeply saddened" by the allegations against Collins.

However, the statement insisted that "First Baptist Church, Vidalia did absolutely nothing wrong."

"Mr. Stanley failed to come forward to Church leadership, or anyone else, with any allegations until nearly a decade after the alleged abuse ended," the statement continued. "Despite Mr. Stanley’s decision not to report the alleged abuse to the police, the Church has cooperated fully with the authorities as they have investigated claims against Mr. Collins. Despite the lack of any criminal prosecution against the accused, the Church forced him to resign from any volunteer position with the Church and forbade him from having any contact with any youth member of the Church."

(Correction: A previous version of this story incorrectly stated Jim Collins was employed by CSG International.)