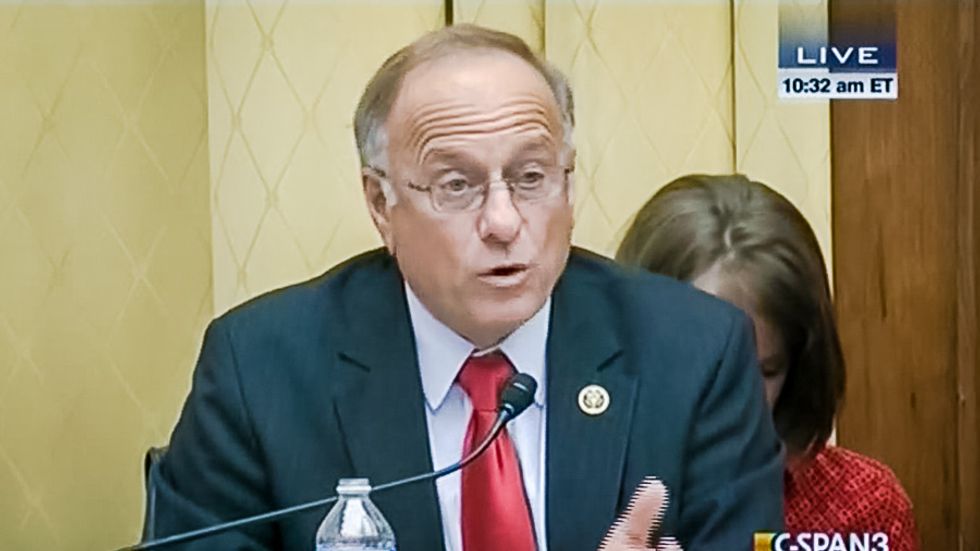 During a House Judiciary Committee hearing on the refugee crisis, King grilled U.S. Citizen and Immigration Services Director Leon Rodriguez about why refugees were asked about their religion only in cases of religious persecution.

"Have you ever seen a suicidal terrorist that was not a Muslim?" King asked, leaving Rodriguez speechless.

"I'm not even sure how to answer that question," the director replied. "What I can say is that we do our job, and if terrorists are attempting to gain admission to the United States, then we do our job to prevent them."

"You're telling me you're doing a thorough vetting process but you're not able to tell me that you ask them what their religion is," King interrupted, pointing to a Daily Mail report which claimed that nearly 70 people -- including refugees -- had been arrested in the U.S. over ISIS plots.

"We're talking about a huge haystack of humanity and that hay is benign, relatively speaking, but in that haystack are the needles called terrorists," he opined. "And the proposal that's coming from the administration is we're so professional that we can examine all of that hay and we can identify any of the needles in it -- terrorists -- and we can sort the needles out of they haystack, and somehow prevent them from coming into America."

King added that people prevented from coming into the U.S. should be incarcerated "in Gitmo where they belong."

"And then this haystack will be benign and it will become part of our culture and society and it will assimilate into the broader American civilization, that's nuts to think that," he continued. "Now we cannot stick our head in the sands and say somehow we're not bringing [Paris-style attacks] upon ourselves. We are watching this slow-motion cultural suicide in America. Slow motion. A generation behind Europe."

Gutierrez suggested that those officials were providing ISIS with the video reel it needed to make its next recruiting video.

"People saying, 'We don't like Muslims, we can't trust Muslims. Muslims are somehow going to create a cultural system in America that's going to destroy us,'" he explained. "It's fear, fear and fear. And you know what's the best tradition of America is people who stood up against the fearmongerers who traffic in hatred and bigotry and and prejudice. And that's what I sadly believe is happening now."

Gutierrez reminded his colleagues that the United States had been wrong to put Japanese in internment camps and to turn away those fleeing Nazi persecution during World War II.

"Look, we made the mistake before, let's not make it again," he warned. "They're in the camps, they're getting vetted. We should welcome them to America, we shouldn't fall into the trap of ISIS."