Jeb Bush reveals strategy to fight ISIS: 'We should have a strategy' 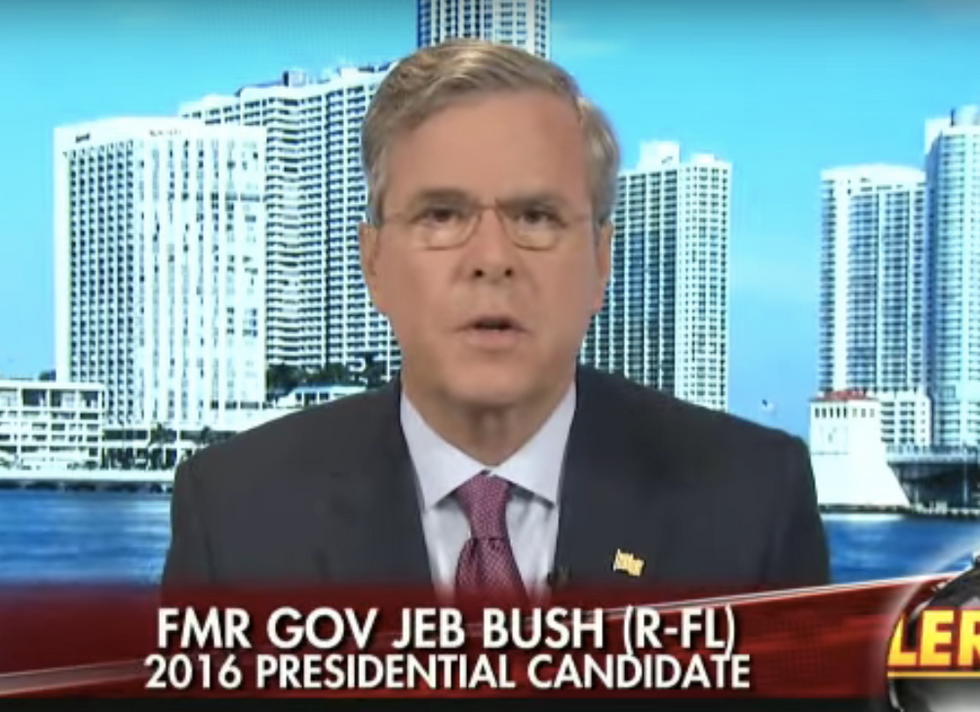 In a discussion with Fox and Friends, Republican presidential candidate ex-Gov. Jeb Bush (R-FL) said that the U.S. needs to "have a strategy" to fight ISIS -- a phrase he repeated more than six times -- but seemed a little fuzzy on the details.

When asked by co-host Steve Doocy what he would do differently than the current administration, Bush replied, "What I would do is to do what I proposed two months ago at the Reagan Library, which is to defeat ISIS, and to defeat Assad, to bring stability because it's in our national security interest to do it."

"To have a strategy," he said, would be his key difference with President Barack Obama's handling of the current situation. "We don't have a strategy right now. This president is incrementally getting us into a quagmire without having a strategy to defeat ISIS."

"We need to be merciless in this effort," said Bush.

President Obama gave a stiffly-worded speech on Monday saying that "if folks want to pop off and have opinions about what they think they would do, present a specific plan."

Obama also slammed Bush's suggestion that the U.S. only allow in Christian refugees from Syria as un-American.

On Fox and Friends, Bush went on to say, "We have troops in Iraq, we have some special operators in Syria, but we don't have a strategy, Brian. I would listen to the military commanders and build a strategy to defeat ISIS."

The flagging presidential candidate -- Bush is currently polling in fifth place in many polls, including those in Florida, where Bush was governor for two terms -- went on to say that the U.S. should not accept refugees from Syria, but should set up "safe zones" within that country so refugees don't have to leave.

"And that requires all in," he said, "we have to be all in on this as the leader of the world."

The president, he said, wants to lead from behind, which is unacceptable.

"We need to lead, we need to create a strategy, we need to bring people along with us, and the strategy ultimately is to defeat ISIS with force, which I know we can do, and move on," he said.

As Vox writer David Roberts said in a series of 16 tweets Monday that conservatives "approach foreign policy almost *entirely* based on what feels emotionally satisfactory. Not only do they neglect empirical analysis of what has happened & what might happen, but they condemn such analysis as weakness."

"But there will never be a grand victory, no dreamy hero flying onto an aircraft carrier in a flightsuit to declare Mission Accomplished," Roberts said. "It’s never going to be emotionally satisfying. Grown-ups know that. It’s the world. It’s complicated. Even US power is limited."