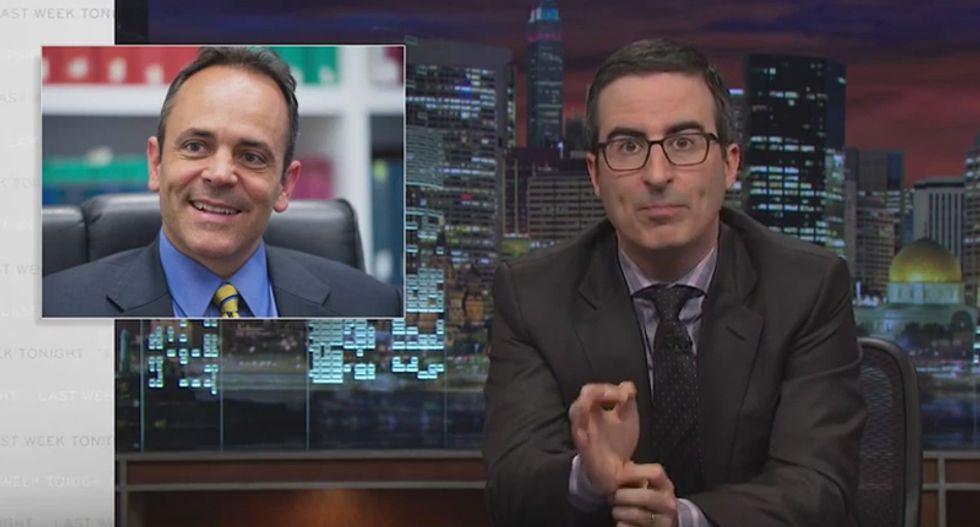 On HBO's Last Week Tonight, host John Oliver drew attention to the upcoming election -- but not the 2016 election that fills the airwaves every day  -- that could have a far-ranging effect of the public's health.

Voters in three of four states will have an opportunity Tuesday to elect candidates who could have a huge impact on whether their state either accepts, or continues to accept, federal funding for Medicaid health insurance for the poorest among them.

According to Oliver, 20 Republican-led states opted out of accepting what is essentially free money from the federal government in order to provide needed health care for residents who can't afford health insurance.

One state that has had overwhelming success in getting the poor insured under Medicaid is Kentucky -- but that could end after tomorrow's election.

Under Obamacare, "Kentucky has seen the nation's steepest drop in uninsured residents," Oliver explained. "Only an idiot would try to undo that -- which brings me to gubernatorial candidate Matt Bevin."

Oliver then shared one clip of the Tea Party-backed Bevin denying he wants to kick people off of Medicare, before sharing a separate clip of the candidate emphatically saying just that.

As Oliver explained, Bevin himself once ran to the government for money when a bell factory he owns in Connecticut burned to the ground. What is maddening about his actions, Oliver noted, is that the "staunch free market" Bevin needed government support because he -- like poor residents of his state -- couldn't afford the insurance on the bell factory's buildings.

"Because the cost of insurance was too high, he needed to turn to the government for help," Oliver stated. "And quite frankly, Matt Bevin, that should ring a f*cking bell. And yet, as of right now, his race is considered a toss-up. He could win!"