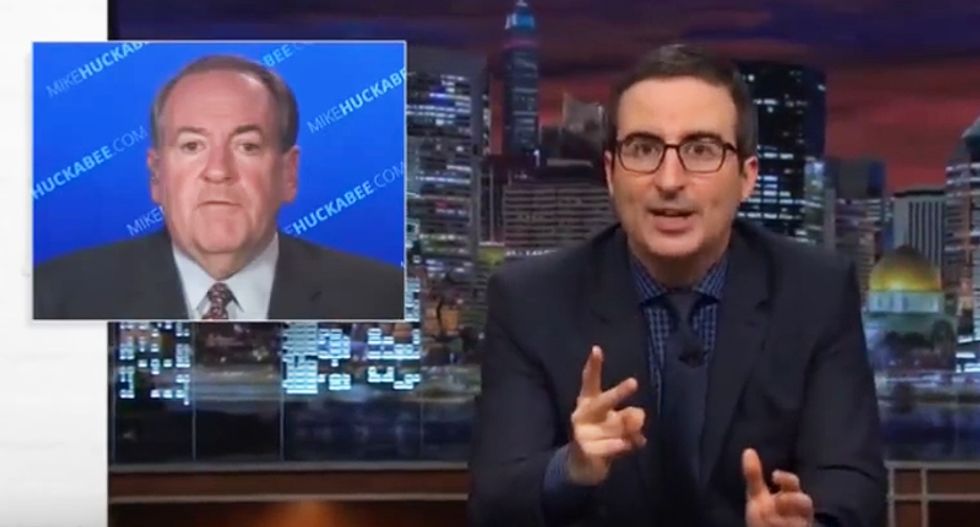 On the season finale of Last Week Tonight, host John Oliver ripped into GOP fear-mongering over Syrian refugees -- but saved most of his ire for former Arkansas Governor Mike Huckabee, slamming him for his over the top attacks on people trying to escape persecution.

Oliver began by noting there was previously only one time in American history "when the fear of refugees wiping everyone out did come true -- and we'll be celebrating that this Thursday."

He went on to explain the extensive vetting process the U.S. government makes every refugee goes through which can take up to 18 months before they are admitted to the country.

“It is absolutely fair to be concerned about safety in the wake of these attacks, and it’s fair to wonder who we’re letting in and what sort of screening system is in place. Unfortunately, many of the people talking about it this week don’t seem to have the first idea of what we’re doing,” said Oliver.

After sharing clips of various Republicans hysterically fear-mongering over the refugees, Oliver focused on Huckabee's analogy comparing the refugees to poisonous peanuts.

"Of course it's no, you should give your kids an actual meal and not a handful of peanuts because they're human children, not circus elephants" Oliver responded.

He then used math to explain the absurdity of Huckabee's argument.

After purchasing 5-pounds of peanuts, the host and his staff counted them, saying they came out to about 1,000 peanuts meaning, "If 10 of them are poisonous, Mike Huckabee is suggesting that one of about every 100 refugees is a terrorist."

Oliver then pointed to statistics from the Migration Policy Institute which state that of the 784,000 resettled refugees since Sept. 11, 2001, only three  refugees have been arrested for planning terrorist activities, with Oliver adding, “none of which, by the way, resulted in attacks here.”