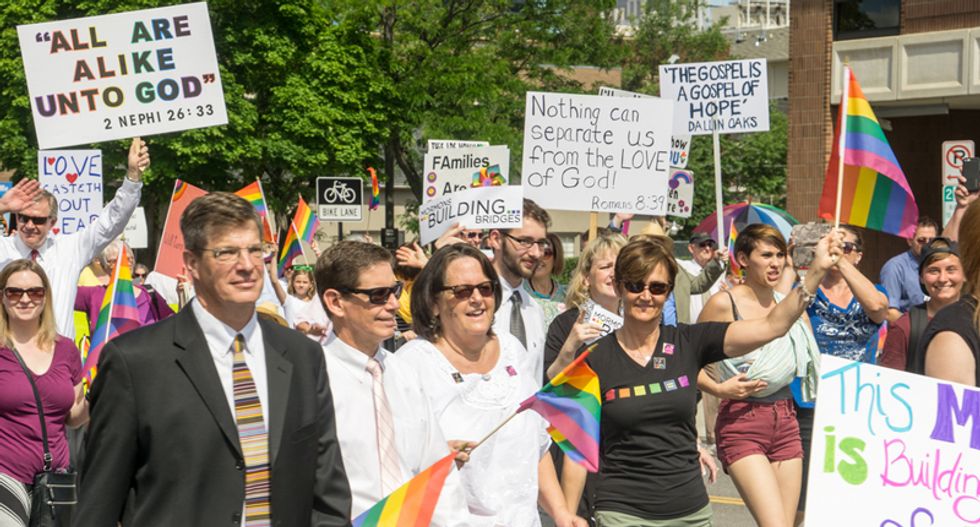 Organizers in Salt Lake City are putting together a mass protest against the Mormon church on Saturday that will include formalized resignations over church elders' recent decision to label gay members "apostates."

A rally is planned at City Creek Park in Salt Lake City this Saturday, where members will be given assistance in abandoning the church over its anti-gay stance. Two notaries have volunteered to notarize resignation letters which will then be deposited in the mailbox at the LDS Church Office Building across the street.

In Facebook testimony responding to the Church of Latter Day Saints policy declaring married same-sex couples to be apostates of the faith and their children ineligible for baptism, a member of the church for over 40 years called it "a kick in the stomach."

"About 40 years ago I joined the LDS church, much against my family's wishes. In fact since I was underage and my mom had to sign a permission form. My family was and still is very liberal. My mom was despondent that I would join a church that discriminated against people of color. She also was not able to see me get married. It broke her heart. She befriended a gay couple back in the 80's when few straight people would. She died before my gay daughter came out," a woman identifying herself as Nancy wrote. "I have given up so much for this church and this is my reward. Increasing prejudice and discrimination for my child who never chose her orientation and only wants the same plan of salvation that everyone else gets. Another kick in the stomach."

"These "men of God" must be told that they can't make monumental decisions with catastrophic consequences without also seeing the repercussions of that power they have bestowed upon themselves for their own misguided and cruel agendas," wrote Mari Burningham Winter who says she was previously married to a man but is now married to a woman."What our church leaders say and do does matter."

Another church member named Lauren wrote, "today's announcements condemning LGBT couples, their marriages and most horribly their children, pitting child against parent...ready or not I just can't have my name on this organization any longer. Not in the tiniest of ways will I support this church. Not now, not ever."