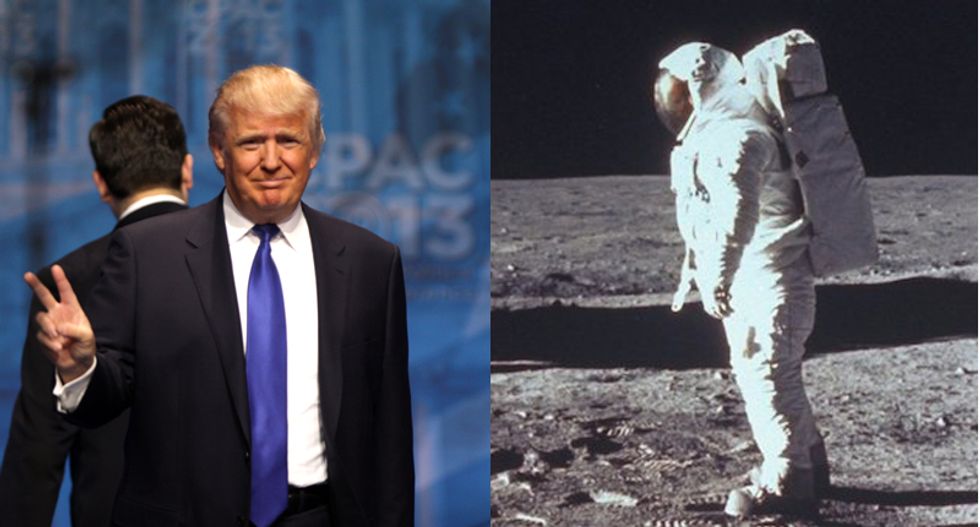 Donald Trump, guy on the moon

Number cruncher and statistician Nate Silver said on Monday that people who are currently hyperventilating about real estate tycoon and former reality TV star Donald Trump's poll numbers need to get some perspective on the issue.

In a column titled "Dear Media, Stop Freaking Out About Donald Trump’s Polls," Silver reminded political reporters and pundits that the number of people currently supporting Trump are still, percentage-wise, roughly equivalent to the number of Americans who believe that the Apollo moon landings were faked.

"Right now, he has 25 to 30 percent of the vote in polls among the roughly 25 percent of Americans who identify as Republican. (That’s something like 6 to 8 percent of the electorate overall, or about the same share of people who think the Apollo moon landings were faked)," wrote Silver.

He continued, "As the rest of the field consolidates around him, Trump will need to gain additional support to win the nomination. That might not be easy, since some  Trump actions that appeal to a faction of the Republican electorate may alienate the rest of it. Trump’s favorability ratings are middling among Republicans (and awful among the broader electorate)."

Trump will also have to motivate that sliver of the population to go to the polls and vote for him. Plus there is a certain amount of statistical noise this far out from the actual election.

Silver said that part of the issue is that average voters just aren't attuned to the process at this point. In spite of the outsized amount of attention that early debates have generated, "most voters have a lot of competing priorities. Developments that can dominate a political news cycle, like Trump’s frenzied 90-minute speech in Iowa earlier this month, may reach only 20 percent or so of Americans."

Silver showed a chart comparing the 2008 race and the 2016 race thus far, noting that "public attention to the race starts out quite slow and only gradually accelerates -- until just a week or two before Iowa, when it begins to boom."

At this point, the majority of voters are barely paying attention, Silver said. Studies of search engines and Internet queries show that "(v)oters are still at the early stages of their information-gathering process."

"So, could Trump win?" he asked. "We confront two stubborn facts: first, that nobody remotely like Trump has won a major-party nomination in the modern era. And second, as is always a problem in analysis of presidential campaigns, we don’t have all that many data points, so unprecedented events can occur with some regularity."

Silver wouldn't rate Trump's chances of seizing the nomination at 0 percent, but he wouldn't rate the businessman as high as 20 percent likely.

"Your mileage may vary," he said. "But you probably shouldn’t rely solely on the polls to make your case; it’s still too soon for that."