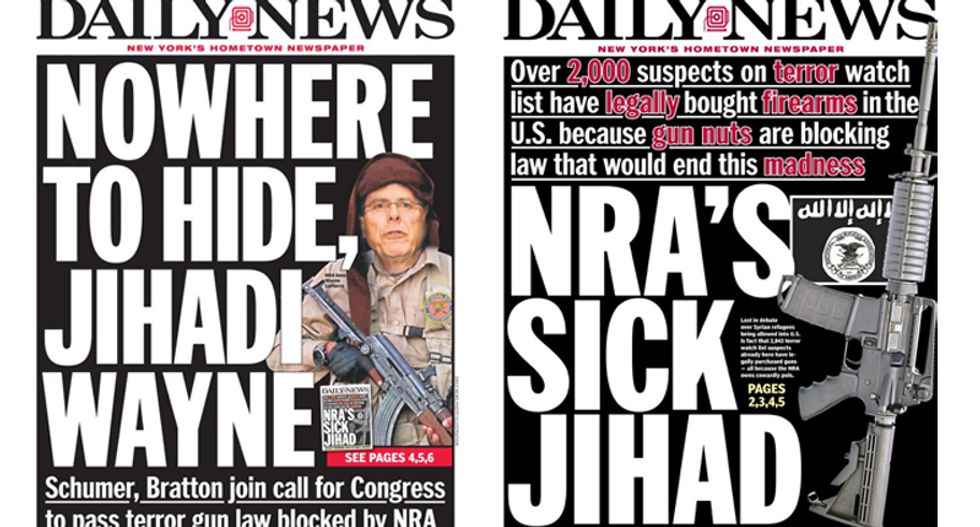 At issue is the NRA using their overwhelming influence with lawmakers to block a law that would ban anyone on the terrorist watch list from purchasing a gun.

The bill, known as the Denying Firearms and Explosives to Dangerous Terrorists Act, was proposed in the wake of the terrorist attacks in Paris that left 129 people in Paris dead and hundreds more injured. Gun control advocates say that a legal loophole allows suspects on the terrorist watch list to purchase guns while the same list prevents them from flying on U.S. airlines.

The bill was originally proposed in 2007, but has been blocked by conservative lawmakers who are heavily backed by the NRA.

According GOP House member and bill co-sponsor Rep. Peter King of Long Island, the NRA is opposed to any bills that might stop anyone from purchasing a gun.

“Anything which they feel restricts the use or the ability to retain a gun they’re opposed to,” King said.

The Daily News doubled down on their attacks on the NRA for their intransigence on sensible gun legislation, with a lead story Monday morning that began: "Under the gun, with its leader nowhere to be found, the NRA faced a fusillade of new criticism Sunday for prioritizing gun rights over prevention of a Paris-style massacre in the U.S."

"Showing no shame, National Rifle Association head Wayne LaPierre remained conspicuously silent about his organization’s opposition to a bill that would keep guns out of the hands of suspected terrorists," the story continued.

This is not the first time the tabloid has gone after the NRA and its leader LaPierre -- whom they have labeled a 'gun nut."

Following the tragic shooting in Sandy Hook that took the lives of 26 -- 20 of them children in the first grade -- the paper blasted the organization with a headline reading: "Craziest Man on Earth: Just 90 minutes after moment of silence for Newtown victims, vile nut blames everyone and everything EXCEPT the GUNS."

Guns Media
Report typos and corrections to: corrections@rawstory.com.
Like this article ? Text `Support` to 50123 to donate.
READ COMMENTS - JOIN THE DISCUSSION