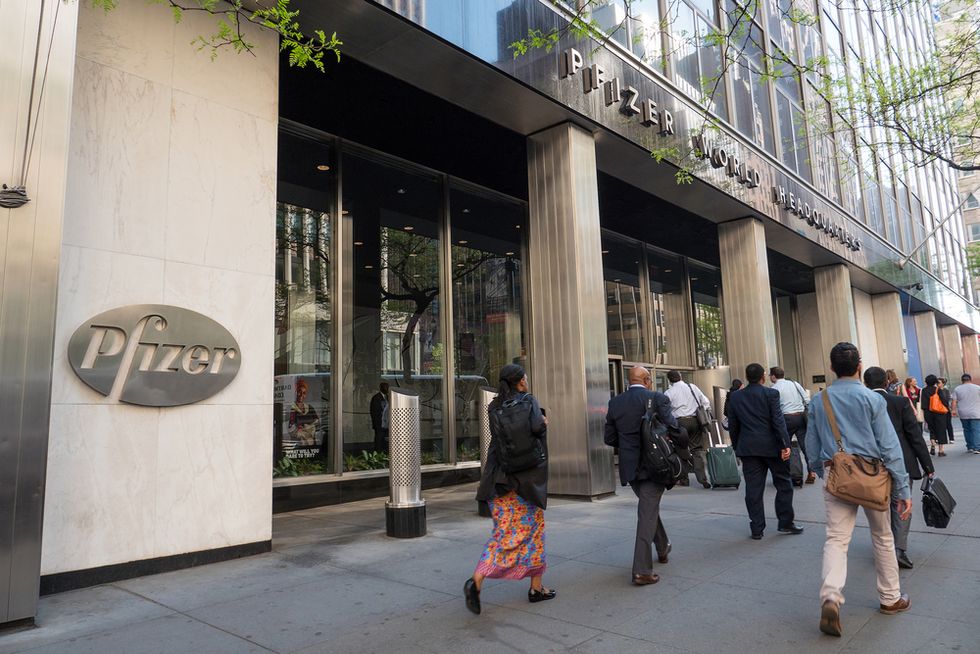 Image: Pedestrians walk in front of the entrance to Pfizer offices in NYC (pio3 / Shutterstock.com)

Pharmaceutical companies Pfizer and Allergan are reportedly on the verge of announcing the largest healthcare merger in history , in defiance of the US government’s efforts to crack down on deals that it believes are thinly disguised forms of tax avoidance .

The pending merger, reported on Friday by Reuters and confirmed on Sunday by the Wall Street Journal , could be announced as early as Monday. Forming a company worth more than $150bn, the deal would allow Pfizer to re-domicile from its headquarters in New York to Ireland, where Allergan is based in Dublin. With the move, the new company would cut its corporate tax range from 15% to 39% in the US to 12.5% in Ireland.

The pending fusion of the companies would be the largest so-called “inversion” yet, whereby corporations on paper relocate their headquarters to more favorable tax environments by appearing to be bought by much smaller entities. It comes at precisely the moment the US treasury is attempting to block such deals.

Treasury secretary Jack Lew said over the weekend: “US companies are currently taking advantage of an environment that allows them to move their tax residence overseas to avoid paying taxes in the US, without making significant changes in the nature of their overall operations.”

Ireland is a popular destination for such inversions, or “reverse mergers”, because of its relatively low corporate tax structure. The Irish Times reported recently that so many such deals were happening that it was starting to distort the country’s foreign investment figures.

In fact, if the Pfizer-Allergan merger goes ahead, it would be the second inversion concerning the increasingly gargantuan pharmaceutical company in six months. In March, Allergan switched its headquarters from the US to Ireland in a reverse merger with the Irish drug maker Actavis .

The inverse nature of the pending deal is illustrated by the fact that although on paper Allergan will be buying Pfizer, the current CEO of Pfizer, Ian Read , will head up the new merged entity, with the CEO of Allergan, Brent Saunders , acting as his deputy. Allergan is much the smaller of the two companies.

The new drug powerhouse would have combined revenue of more than $60bn – more than any other global drug manufacturer in terms of sales. It would have a large range of prominent products in its stable, from Allergan’s anti-ageing product Botox to Pfizer’s Lipitor for lowering blood cholesterol.

One of the big questions now hanging over the Pfizer-Allergan deal is whether the US government will have the muscle to influence it. The Treasury Department has been scrambling to introduce restrictions designed to prevent inversions, to allow the government to continue taxing US corporations even if, technically, their headquarters move abroad.

But the Obama administration has made clear that a solution to the problem can only fully be secured through new legislation. With Congress controlled by Republicans as yet unable to agree on a way forward with Democrats, the massive proposed merger may well prove too powerful to resist.