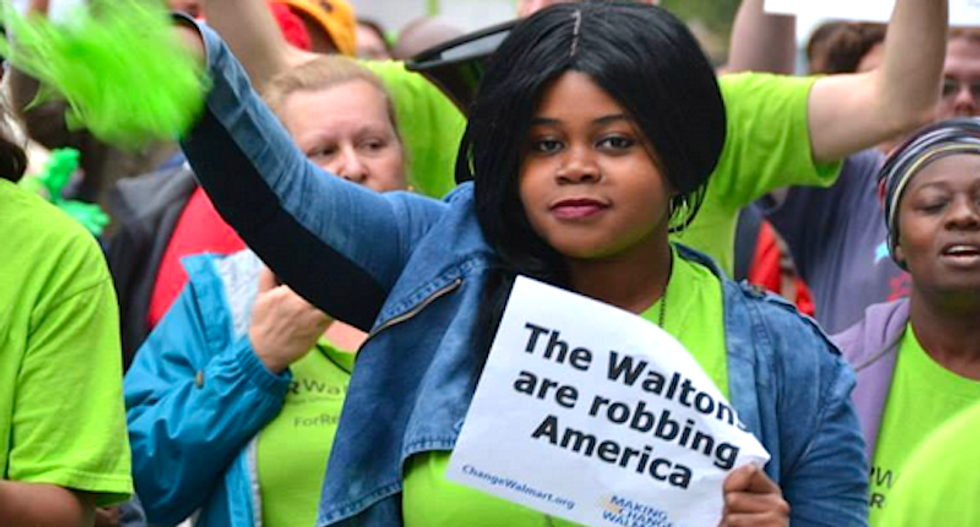 Walmart employees are so poor that they are skipping lunch, sharing it or, in some cases, stealing it from their coworkers, some of the company’s workers claimed on Thursday while announcing a fast in protest of the company’s wages.

Starting Friday morning, over 100 Walmart associates who are members of Our Walmart, a workers organization, and about a 1,000 supporters will begin a fast to shine light on what they describe as Walmart’s “poverty pay”.

The protest comes in the run-up to Thanksgiving and the Black Friday shopping bonanza, one of Walmart’s busiest periods. Some of the workers will take their fast to the doorstep of Walmart heiress Alice Walton’s apartment in New York City.

Earlier this year, Walmart announced it was raising wages for about half a million of its employees, paying them at least $9 an hour – $1.75 above the federally mandated minimum wage. The company plans to further increase their pay to $10 an hour next year.

The workers say that’s still not enough and demand that they be paid $15 an hour and be given full-time schedules. The name of the 15-day fast is Fast for 15.

Tyfani Faulkner, a former Walmart customer service manager from Sacramento, California, who worked for company for about five years, will be one of those fasting in protest.

“Every day there are associates who go to work with no lunch, or an unhealthy lunch, because that’s all they can afford. I have seen instances where some would eat another associate’s lunch from the refrigerator because they have nothing to eat,” said Faulkner.

“One of the things I remember most from working at Walmart was my friends and I emptying our pockets to scrape together one meal we all could share for lunch. One of my coworkers put in a dollar, another two dollars, and with my two, we could together buy chicken from Walmart’s deli to split between us. That was lunch; I don’t know if they had dinner.”

Denise Barlage, who worked at Walmart for nine years before being laid off during a store closing in Pico Rivera, California, said that break-room conversations at her store often focused on workers having to chose between paying for gas to get home or buying lunch.

“These are decisions no one should have to make. There were times my own lunch was stolen, leaving me to think someone needed it more than me,” she said.

Speaking with reporters on Thursday, Faulkner called on Walmart to pay workers a living wage so that they could support themselves.

“We need $15 an hour and full-time hours to provide for our families,” said Jasmine Dixon, a Walmart associate and a mother of two boys from Denver, Colorado.

“I’ve had to forego meals just so my boys would have enough to eat. Too many times, I have had to go to food banks just to try and scrape up some rice and beans for my kids to eat. If it weren’t for food stamps and government programs for my kids, I don’t know what I would do.”

In addition to asking Walmart for a $15 hourly wage and a better schedule, Nancy Reynolds, who works as a Walmart associate in Merritt Island, Florida, is petitioning for a 10% employee food discount at Walmart year round.

“I know other stores offer higher discounts for their employees and they don’t make the money that Walmart makes,” said Reynolds, who described herself as a mother, grandmother and great-grandmother who could not stand to see people go hungry.

All Walmart associates will be paid least $10 an hour by February 2016, a Walmart spokesman told the Guardian. He added: “Currently, department managers make around $13 per hour, and will receive an increase to at least $15 per hour next year.”

In response to the Guardian’s request for comment, Walmart also pointed to a video featuring Noemi Flores, a manager at Walmart.

“Back in the 80s, it was really tough for me and my family. I was living on welfare, supporting a family of four. After I got the job at Walmart, things started to change immediately,” Flores said in the video. “Then I wrote a letter to the food stamp office: ‘Thank you very much. I don’t need your help anymore.’”

Flores is among the 73% of Walmart’s management team members who started as hourly paid employees. In the 20 years she has worked at Walmart, she managed to buy a house. Her son also works at Walmart now.

Members of Our Walmart argue that not everyone working at Walmart has been able to make it on its wages, as Flores and other managers have.

“Stories of hunger and food insecurity, of not having enough food to feed your kids are far too common with Walmart workers,” said Andrea Dehlendorf, co-executive director of Our Walmart. “This Black Friday season, our Walmart workers have decided to share their stories of hunger, to make their private shame public.”