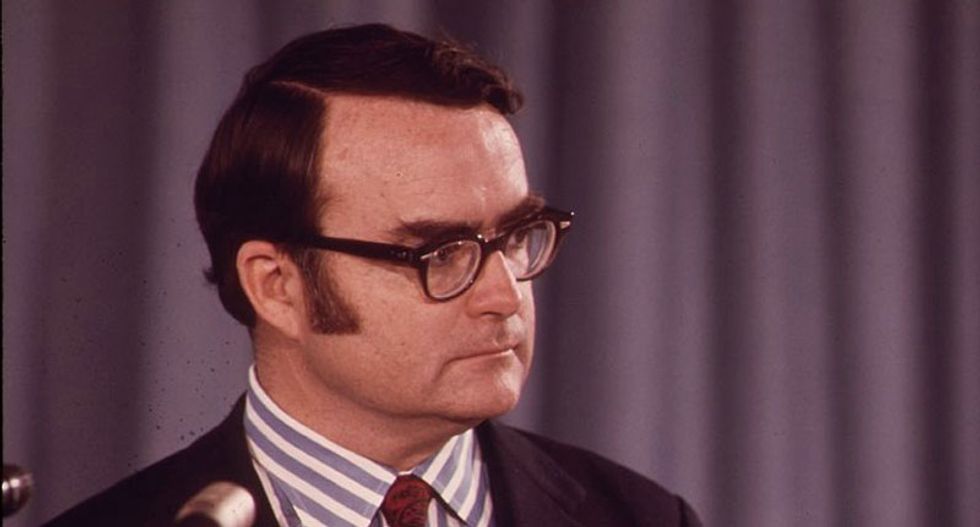 The man considered the father figure of environmental protection in the US has attacked Republicans for “going through all the stages of denial” over climate change, accusing leading presidential contenders Donald Trump and Marco Rubio of ignoring science for political gain.

William Ruckelshaus, who on Tuesday is to receive the nation’s highest civilian honor, the presidential medal of freedom, told the Guardian that leading Republicans are harming the US’s reputation by attempting to stymie efforts to tackle climate change.

The criticism is particularly stinging as Ruckelshaus previously ran for election as a Republican and was appointed by Richard Nixon as the first head of the Environmental Protection Agency in 1970. Ronald Reagan appointed him to a second term at the federal regulator in 1983.

“The [Obama] administration is trying to lead on climate change but they aren’t getting much support from the Republicans who have turned it into a partisan issue, which is too bad,” Ruckelshaus said. “If they are successful, that will set us back a fair bit. It won’t look good to the world and it won’t be good for the US.”

Republican leaders, who have signaled their opposition to any deal at looming climate talks in Paris, have attempted to dismantle key elements of Barack Obama’s strategy to lower emissions.

The Republican-dominated Senate voted on Tuesday to repeal Obama’s centerpiece policy that uses the EPA to enforce rules to cut pollution from power plants. Mitch McConnell, the senate majority leader, said Republicans were protecting middle-class Americans from “deeply regressive energy regulations that would eliminate good-paying jobs and punish the poor”.

Obama has vowed to veto any repeal, but any Republican who succeeded him as president appears unlikely to follow suit. Trump, a leading contender for the Republican nomination, has called global warming “bullshit” and a “total and very expensive hoax”.

Ben Carson, another potential nominee, has said climate change is “not a big deal”, while Florida senator Marco Rubio said last year that scientists have taken “a handful of decades of research and say that this is now evidence of a longer-term trend that’s directly and almost solely attributable to man-made activity. I don’t agree with that.”

Ruckelshaus criticised the current Republican leadership for “resisting doing anything” on climate change in a bid to appease the party’s increasingly conservative voting base.

The 83-year-old was appointed the first administrator of the EPA in 1970 by Nixon, leading the landmark introduction of pollution regulations before standing down in 1973. He then served a second stint heading the federal regulator under Ronald Reagan from 1983 to 1985. Prior to the EPA, he ran for the Senate as a Republican.

“The Republicans aren’t helping, they are just responding to the convictions of the base that climate change isn’t a real problem and feeding that back to them – it’s a vicious cycle,” he said. “Instead of treating it as a serious problem they are going through all the stages of denial. They are now at the stage of saying that it’s too expensive to do anything about climate change, which is no solution at all, they may as well just deny it’s a problem.

“I don’t know what Trump actually knows about climate change, I don’t think Trump thinks much about many of the issues. Rubio shifts around a lot because he hears a lot of different messages from his constituents but what he’s essentially saying is that climate change isn’t a big enough problem to address. That comes down to not dealing with it. It’s concerning and I don’t understand why they don’t see this as an opportunity rather than something to be denied.”

“There was huge resistance from the auto industry, they pushed back very hard,” Ruckelshaus said. “The difference from then until now is that the public demanded something be done about pollution and the government listened. The four major auto companies sent their CEOs to lobby against the Clean Air Act and they got about three votes in the Senate and not many more in the House. They thought they’d get it reversed in the House and they didn’t get anywhere.

“In those days you could smell and touch the pollution, it was a bit like how China’s cities are today. That had a galvanizing effect. The greenhouse gases of today, you can’t see or taste or feel them. And it’s got way too partisan. The atmosphere today is completely different to the 1970s; Republicans’ arguments are all partisan driven, they aren’t based on any legitimate analysis of science.”

Under Obama’s plan to slash the US’s output of greenhouse gases, the EPA will treat carbon dioxide as a pollutant and will ensure that power plants cut emissions by 32% by 2030 on 2005 levels. A coalition of 24 states and a coal mining company have filed lawsuits against what they call the “flatly illegal” regulations, claiming that they represent an overreach of executive power.

But Ruckelshaus said the new use of the EPA’s powers was “exactly how the Clean Air Act was meant to work in the first place”.

“If the states didn’t meet standards to protect public health, the federal government stepped in, that’s how it was set up,” he said. “Congress is now threatening all sorts of things but if you don’t like the laws you rewrite them not complain about them. The EPA has to keep enforcing the law, they don’t have a choice. It would be underreach if they didn’t enforce the law and protect public health.”

Ruckelshaus will be awarded the presidential medal of freedom at the White House alongside other recipients, who include film director Stephen Spielberg and singer Barbra Streisand.

The former EPA administrator will be honoured primarily for his environmental work but he is also known for resigning as deputy attorney general in October 1973 amid the Watergate crisis after refusing to dismiss the special prosecutor in the case.

“Not all the calls I’ve received from the White House have been welcome ones, but this latest one certainly was,” he said. “Never in my wildest dreams did I think I’d be honoured like this.”

1960: Made deputy attorney general of Indiana at 28 years old.

1968: Ran for the US Senate as a Republican, losing narrowly to Birch Bayh.

1970: Appointed the first administrator of the Environmental Protection Agency by President Richard Nixon.

1973: After bringing in landmark regulations of transport pollution and banning the pesticide DDT, Clean Air Act is enshrined in US law. Ruckelshaus shifts to become acting director of the FBI.

1973: In the same year, Ruckelshaus is appointed deputy attorney general of the US Department of Justice. He subsequently resigns the position, along with his boss Elliot Richardson, rather than obey an order from Nixon to fire Archibald Cox, the special prosector in the Watergate scandal. The event is known as the ‘Saturday night massacre’.