Seth Meyers schools Sarah Palin on Syrian refugees: There is a vetting process -- and here's how it works 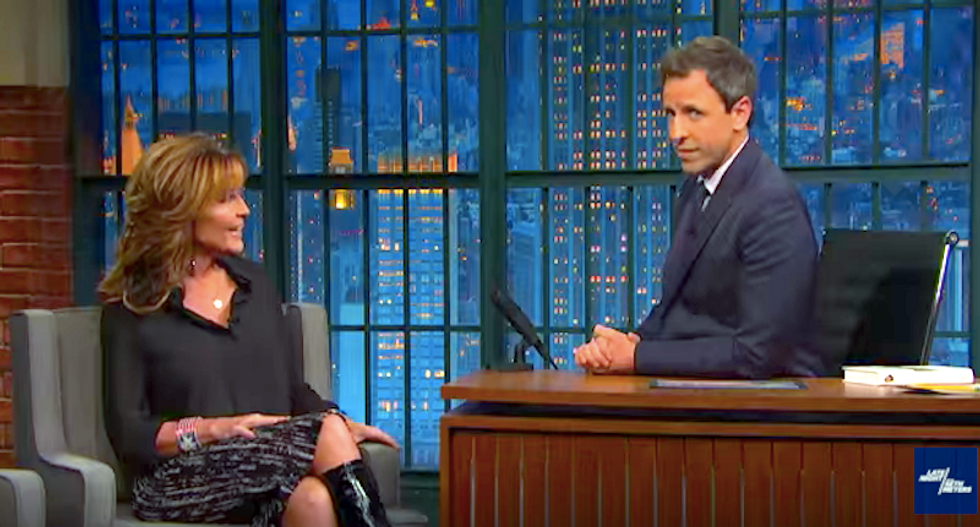 Sarah Palin flatly stated that the federal government has no screening process for Syrian refugees -- and then Seth Meyers explained it to her.

"Their message is not, we don't want Syrian refugees," Palin said. "Their message is, what is the vetting process? How do we know that these are the innocents who are coming over and actually needing aid, and they're not the bad guys infiltrating under the guise of refugee? And they want a vetting process, because we don't have that from the top, we don't have that at the federal level."

Meyers, the host of NBC's "Late Night," told Palin there was a vetting process -- and he quickly sketched out how it works.

"In order for any refugees to come in, it is, like, an 18- to 24-month process for them to get through," Meyer said. "It starts at the UN, and then it comes through multiple government agencies here in the states. Is it maybe just that, at the core, I think there's just a lack of trust across the board of the federal government? Do you think that's what these governors are really saying, that ultimately anything the federal government tells them, they don't trust?"

Palin quickly blurted that she didn't trust the federal government when confronted with evidence that demonstrated the opposite of what she had claimed.

"Well, I don't trust what the federal government is telling us," Palin said. "But even you should not trust that the federal government is telling you about the 18- to 24-month vetting process is as legit as perhaps they're trying to make the public believe, because truly, there is no way to filter out those that would want to do this country harm with the process that we see in place today. And that's why it's not just Republican governors, but Democrats, too, who are saying, wait a minute -- somebody's got to be the last line of defense here, so the states are taking on that authority."

Meyers asked if there was any possible way to ensure absolute safety, and the reality TV star retreated behind a rhetorical flag.

"If we were to strive to reach absolute safety, we would not have freedom," Palin said. "If people have the choice here -- I mean, we can have both, but we're all about freedom. That's a foundation of our country, so we're not going to give up freedom for that."

"I think this idea that they're coming here to infiltrate, I think that is fear-based," Meyers said. "I do think they want to come here and enjoy the same things you and I are lucky enough to enjoy."

"I do think most people want to come to America to enjoy what it is that we've been blessed with," Palin agreed. "I do, I do. It's just unfortunate that we know, as we saw in Paris, there are some people who want to get to a country to do harm. But no, I agree with you -- for the most part, people want to be here to enjoy that exceptionalism that we're all blessed to enjoy."