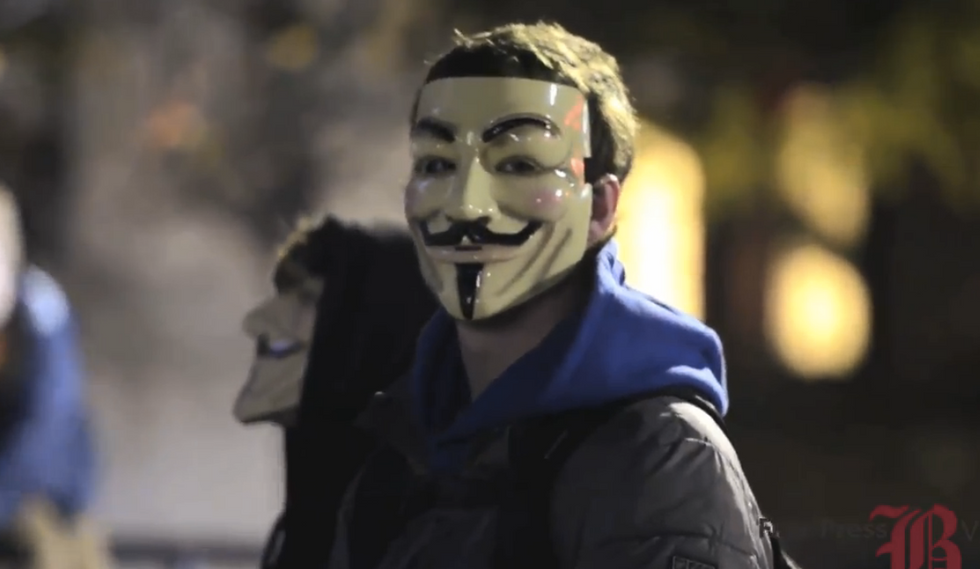 Police in Burlington, Vermont detained two men last week during an anti-Ku Klux Klan protest on grounds that they were violating a 50-year-old ban on masks, hoods or any other clothing designed to conceal the wearer's identity.

According to the Burlington Free Press, both men were wearing Guy Fawkes masks in the style of the hacktivist collective Anonymous.

During the rally, police approached two protesters who were wearing masks and asked them to remove them. Neither protester would remove his mask or give his identity to the police. Both men were detained and later released without charges. However, the detentions raise serious questions regarding free speech and the rights of protesters.

In 1962, Burlington passed a city law forbidding people over 21 from wearing any form of identity-obscuring hood or mask. The law was passed to fight the Ku Klux Klan, whose white hooded robes have become a symbol of racial violence and systematic oppression of black Americans since the Reconstruction era.

He went on to say that protesters wearing Guy Fawkes or 'Anonymous' masks on Thursday night -- the day when Anonymous released the names and contact information of 1,000 Klan members online -- were making an anti-Klan political statement, which is protected under the nation's free speech laws.

"The masks are pretty clearly communicating an anti-KKK message," Gilbert said. "That's about as political a message as you can get, which carries the highest protections of free speech."

The Burlington Police Department's Deputy Chief Bruce Bovat told the Free Press that the men were taken into custody because they refused to show ID, which police officers need to determine a person's criminal history, whether they are actively being sought on warrants and so that police have a name to write on a citation for violation of a city ordinance.

"When you're suspected of committing a crime or breaking an ordinance, which it sounds like they were, asking to identify themselves would be allowed," said Gilbert. "If they insist or ask any more questions, we would usually advise you not to answer any questions beyond that, and ask if you are free to go or if you are being arrested."

The Burlington city attorney's office told the Free Press that it is examining the mask ordinance and will possibly make changes to the law. Currently there is a "performer exemption" for street buskers and other performers. Alterations may be made in the ordinance regarding holidays like Halloween and Mardi Gras when masks are commonly worn.