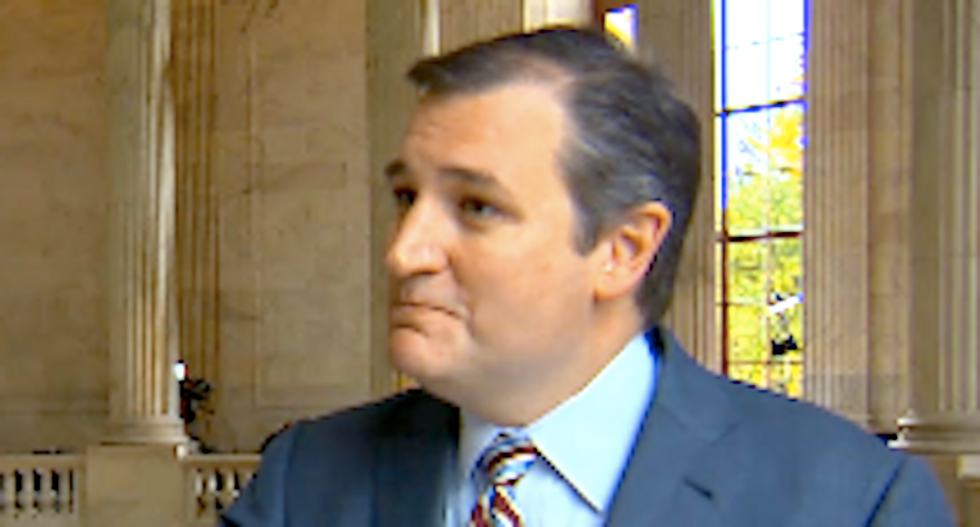 Sen. Ted Cruz (R-TX) plans to introduce legislation this week to prevent "tens of thousands of Syrian Muslim refugees" from entering the U.S., which naturally begs the question: What about Christian refugees?

ABC News' Jon Karl asked Cruz, the Republican presidential candidate, if he would bar Muslims but permit Christians to enter the U.S.

Karl pressed on, asking Cruz if he meant that no Muslims from those countries would be allowed but Christians could seek refuge.

"We should not be allowing Muslim refugees from countries where ISIS and al Qaeda have control of significant amounts of territory because of the inability of this administration, the inability of our intelligence sources to distinguish between who is and is not an ISIS terrorist," Cruz said.

Karl asked if immigration officials would just ask incoming refugees whether they were Christian or Muslim under Cruz's policy, or if there were other methods for accurately determining a person's religion.

"At the end of the day it's not that complicated," Cruz assured him. "There's no history of ISIS terrorists embedding in the Christian community and pretending to be Christian. If that were occurring, we would work to prevent it. And listen, any refugee coming into this country should be thoroughly vetted. I'm not saying anyone should be exempted from vetting."

"And you don't think it's un-American to say, only Christians, no Muslims," Karl asked. "Are you suggesting that all Muslims are terrorists or a threat of being terrorists?"

"What I am suggesting is the commander-in-chief needs to protect this nation," Cruz said.

"There are radical Islamic terrorists and there are Muslims who are not," Karl said.

"What I'm suggesting is the commander-in-chief should protect this nation," Cruz repeated.

Obama criticized Cruz for suggesting a religious test before allowing Syrian refugees to enter the U.S., and the GOP candidate later bragged about the barb during a campaign stop in South Carolina.