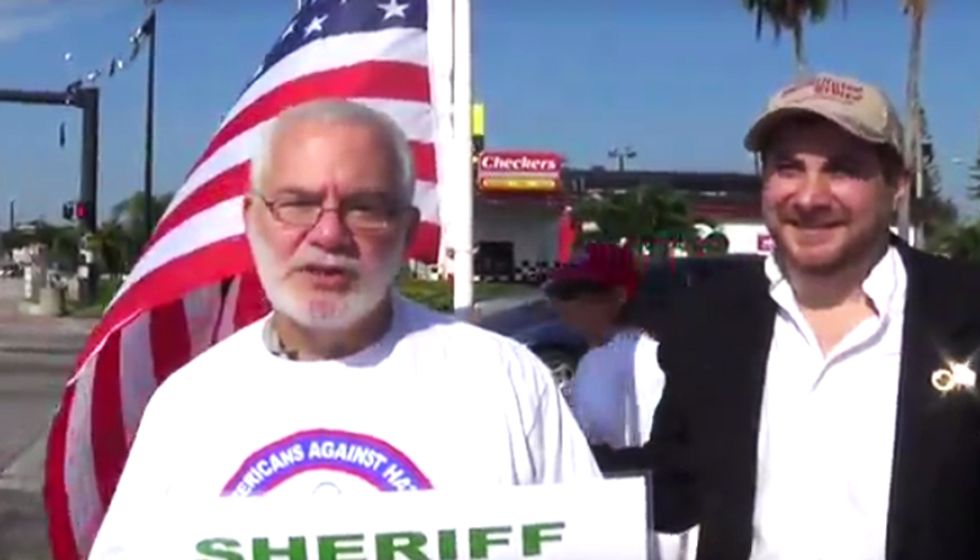 A group of Florida citizens, egged on by a local radio host, are calling for the resignation of the Broward County sheriff for hiring -- and then refusing to fire -- a Muslim deputy who is also the director at the Florida chapter of the Council on American-Islamic Relations, WPLG reports.

Broward County Sheriff Scott Israel has been under attack for months over the hiring of Deputy Nezar Hamze, whom detractors have taken to calling "Deputy Hamas."

"I hate Islam. Islam is evil," local anti-Islamic activist David Rosenthal explained. "Ideally, I would ban Islam in the United States. I am against Sharia-compliant Muslims having any position in government, law enforcement or the schools."

Rosentahl is not alone in his hatred of Muslims, with WFTL radio host Joyce Kaufman criticizing the hiring of Hamze on her show, and writing a scathing post online at LeoAffairs.com, that has received over 70,000 views.

The attacks on Hamze and Sheriff Israel go back to October when activists and Florida Tea Party members held a rally calling for both men to step down.

Speaking to the crowd, Tom Trento of anti-Islamic group The United West, ripped into the sheriff, saying, "What the hell is going on with Scott Israel that he hires a terrorist!"

According to Wilfredo Ruiz, a local attorney who works with Hamze at CAIR, the response to the deputy is pure bigotry.

"Like him, thousands of other Muslims in America today are wearing the uniform. ... I was, myself, a naval officer," Ruiz said."Nobody from a desk can tell me what patriotism is when I have worn my uniform."

Activist Rosenthal dismisses such talk saying, "The Islamization of Broward County has begun."