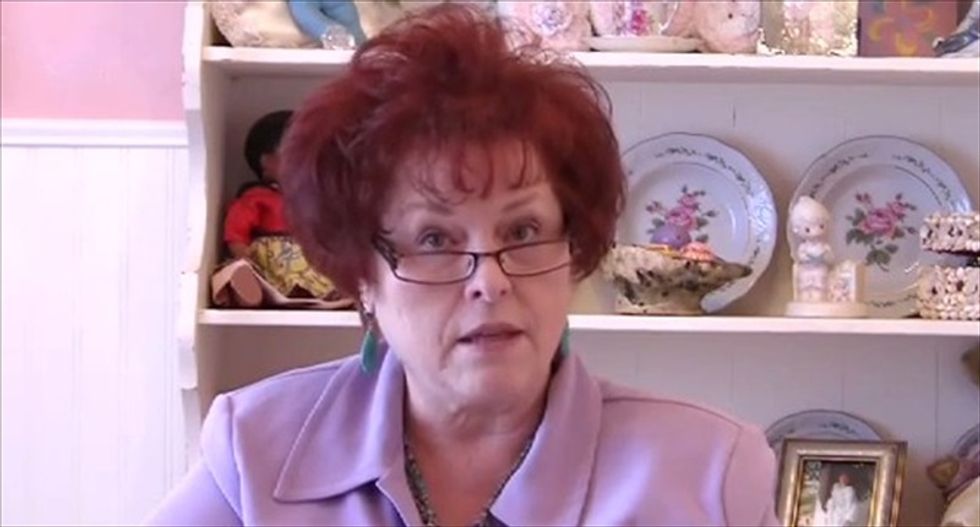 An Arizona lawmaker who believes the earth is only 6,000 years old and that the U.S. government regularly sprays its citizens with mind-controlling chemtrails has been selected to lead an Arizona legislative committee overseeing education.

Sen. Sylvia Allen (R-Snowflake), was selected by fellow Republican and Senate president Andy Biggs to chair of the Arizona Senate Education Committee, according to 12News. The committee acts as a gatekeeper for education-related laws, including Common Core and spending.

"She understands what Arizona students and parents need in our education system," Biggs told reporters in a prepared statement. "She is a very experienced legislator and I know she will do a wonderful job."

According to AZCentral, Allen attended high school but did not go to college. She helped found a charter school in her home town of Snowflake.

In March, Allen made national news when she derailed a discussion about gun legislation to suggest a law that forces Americans to go to church on Sundays.

In March 2013, she wrote an addled Facebook post about her belief the government was purposely poisoning its citizens with chemicals sprayed by airplanes, confusing white contrails left by aircraft with chemical trails.

"Ok, I do not want to get into a debate about weather. However, I know what I see weekly up here on the flat where I live outside of Snowflake. The planes usely (sic), three or four, fly a grid across the sky and leave long white trails streaming behind them. I have watched the chem-trails move out until the entire sky is covered with flimsy, thin cloud cover," she wrote. "Things are happening all around us that we see everyday and just don't get what it is. I think we throw the 'conspiracy theory' at people when we don't understand or have the information they have so we try and explain it that way."

Allen will replace state Sen. Kelli Ward, who resigned the position to run against Sen. John McCain for a seat in the U.S. Senate.

Half of mail-in ballot requests rejected in key Texas county

Voting rights advocates responded with alarm to reports this week that around half of the mail-in voting applications in Texas' fifth-largest county have been rejected as a result of a recently enacted voter suppression law that experts say is part of a nationwide Republican effort to restrict access to the polls.

"It's disturbing that our senior citizens who have relished and embraced voting by mail are now having to jump through some hoops."

Jonathan Riches has been to 40 Donald Trump rallies and fervently believes the last US presidential election was stolen.

Like thousands of others who spent hours in a dusty field in Arizona this weekend to watch the former president speak, that belief is a bedrock -- no matter how much the Republican Party leadership wishes otherwise.

A year after arrest, Alexei Navalny says no 'regret' about return to Russia

The Kremlin's most prominent critic Alexei Navalny said Monday he did not regret returning to Russia a year ago, despite his jailing and a historic crackdown on the opposition.

Navalny was detained in a Moscow airport on his return to Russia from Germany on January 17 last year, ushering in a months-long crackdown that has seen his most prominent allies imprisoned or exiled.