Bigots go bonkers after Muslim judge swears oath on Koran instead of Bible: ‘She should be arrested!' 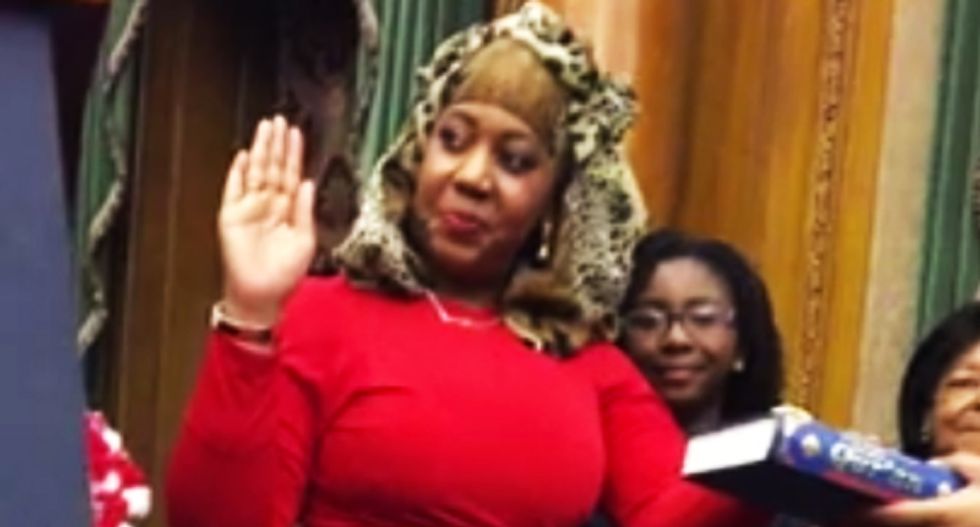 Judge Carolyn Walker-Diallo at her swearing in -- (Facebook screen grab)

Reacting to news that a New York judge -- who is a practicing Muslim -- took her oath of office using the Koran, commenters flooded a Facebook announcement, calling it an "abomination" and saying she should be arrested.

Following her election last month, Carolyn Walker-Diallo was sworn in as a civil judge for the 7th Municipal District in a Brooklyn Borough hall last Thursday. She chose to take her oath using a Koran instead of a Bible.

After video of the New York Law School graduate was posted online by community activist and litigator Mohammed Mujumder, enraged commenters swarmed his Facebook page to express their outrage, with one writing, "Another piece of shit Muslim. Trying to take over this country."

Mixed in with racist memes accusing President Barack Obama of being a Muslim were concerns that Walker-Diallo might institute Sharia law from her East New York City bench.

"How is using anything other than the holy bible to be sworn in acceptable?" wrote Randy Helms, with Andrew Green adding, "Absolutely disgusting. What a shame and pitiful place New York has become."

Ray Ivy wrote: "That is so sick, she should be arrested for that," setting off more commenters. Others wrote, "This is a sad day for America!" and "Makes me sick."

Linda Brice Burleson took a stab at being reasonable, adding: "In thinking about this, I believe it is foolish for Muslims to be in positions of authority. It's just asking for trouble; but there is no point in swearing them in on Bibles, since the Bible means nothing to them. Unfortunately, their holy book tells them it is okay to say and do whatever furthers the cause of Islam," before Terrie cut to the chase with, "Just a short time before Sharia law is implemented. What idiots allow this"

Simon Shears predicted doom: "This is but one of the many signs that unless we do something, anything, not just our way of life but our lives will be put to an end..." while Tom Horne went into more detail, writing: "Those who have never served our country have no idea what their freedom is, it is a fragile thing and they are working to overthrow us from the inside and out. It is one thing to be kind it is another to be foolish, when they are holding you about to chop off your head I would like nothing more then to hear your opinion at that time. You hear and read information spoon-fed to you threw them media from our government - it will not be long in all of you soft headed people will scream and moan and cry out to God but he will not hear you."

Not all comments were critical, with several people pointing out that government officials should be taking their oath of office on a copy of the Constitution instead of the Bible or the Koran.

Watch video of Judge Carolyn Walker-Diallo's swearing in below, via Facebook: