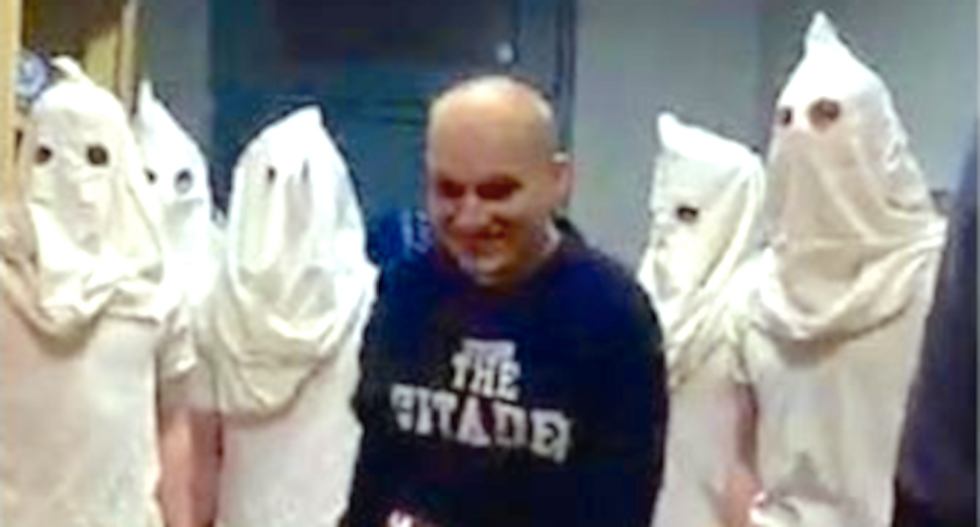 A woman who posted the photos said she was threatened and offered bribes to remove the images from her Facebook page, reported WCIV-TV.

"I was threatened, harassed and offered money from numerous Citadel Cadets to take it offline in order to not 'ruin their lives,'" the woman said.

The TV station obscured her name to protect her privacy.

The Facebook post indicates the cadets are singing Christmas carols while wearing the white hoods, and a man school president Lt. Gen. John W. Rosa calledan "upper class cadet" is shown taking part in one of the photos.

School officials have not commented on the incident, but the station reported the incident is under investigation.

A source said the men seen wearing the hoods are likely first-year students, or "knobs," based on the way they are standing.

The students are likely taking part in a form of hazing, the source said.

The Citadel was founded in 1842 as a military college and arsenal established by Charleston, South Carolina officials to protect white residents from the city's majority black population over fears of a slave revolt.

A previous rebellion, in 1822, resulted in the arson destruction of the Emanuel African Methodist Episcopal Church -- the same church where a white supremacist gunned down nine worshippers earlier this year.

Six black conspirators and 30 other slaves were hanged in the ensuing hysteria, and black churches were outlawed in 1834.

This story was updated to note that the older man is not an instructor, as previously reported.