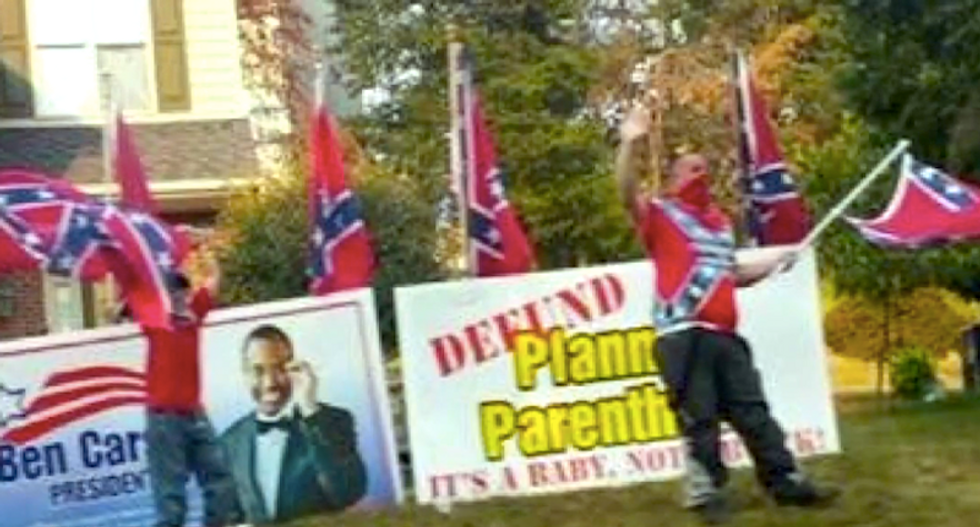 A Maryland man faces possible hate crime charges after neighbors say he's been targeting them with a nonstop campaign of harassment.

The racial harassment started as soon as a black family moved in next door to a Lake Linganore home last year and has only gotten worse, reported WTTG-TV.

"It's so bad (that) when I call 911, within 10 seconds the dispatcher cuts me off (and says), 'I already know what you're calling about,'" said Dante, who asked to keep his last name anonymous.

The neighbor, Shaun Porter, decorates his pickup truck, panel van and motorcycle with Confederate flags, and neighbors said he brandishes military-style weapons in his front windows and threatens others.

"He pulled a gun on some workers that were remodeling my bathroom because they parked in front of his house mistakenly, thinking it was mine," Dante said.

Neighbors shared a photo of Porter and his teenage son engaged in an hours-long demonstration on the front lawn of the home they rent.

The photo shows the pair wearing Confederate flag bandanas over their faces and waving Confederate flags, with several others set up behind them, while standing in front of large signs promoting Ben Carson's presidential campaign and urging lawmakers to "defund Planned Parenthood."

Dante said Porter has told his son to leave the park if "the black kid is there," referring to Dante's son.

He called police at 2:30 a.m. one night last week after he said Porter played loud music for hours, and Porter responded by spray-painting "f*ck Dante" across the driver's side of his own pickup truck.

"He's threatening, he's harassing -- he's doing absolutely everything," Dante said. "Thursday night he put my name on his truck -- then it became a direct attack."

The neighborhood's homeowners association has asked Porter to take down his Confederate flags -- and he responded by setting up obscene signs on his front lawn showing board members' faces and urging them to "eat sh*t."

He also painted the cab of his pickup truck to read, "I (heart) Jenkins" -- a reference to Frederick County Sheriff Charles Jenkins, ranked by Fox News as America's second-toughest sheriff on immigration and a defendant in a wrongful death lawsuit involving a man with Down syndrome.

Jenkins has posted deputies to provide round-the-clock patrols in the neighborhood and interview residents, and he said the evidence suggested Porter could face criminal harassment or even hate crime charges.

The sheriff plans to hand over the case to the state attorney's office to determine whether they have probable cause to charge Porter, who told the TV station that Dante was harassing him.

"He allegedly calls me names and he harasses me," Porter said. "He calls the police about the way my car is parked in the middle of the night to wake me up on purpose. No, I don't rev my engine late into the night -- he's talking about kids in the neighborhood, it has nothing to do with me."

He denied tailgating a school bus on his motorcycle, which terrified students recorded on video that shows the driver telling Porter that's against the law.

"No, I wasn't tailgating any bus -- otherwise I would have been charged, wouldn't I?" Porter said, before driving off in his van with a large Confederate flag wadded up on the passenger seat.