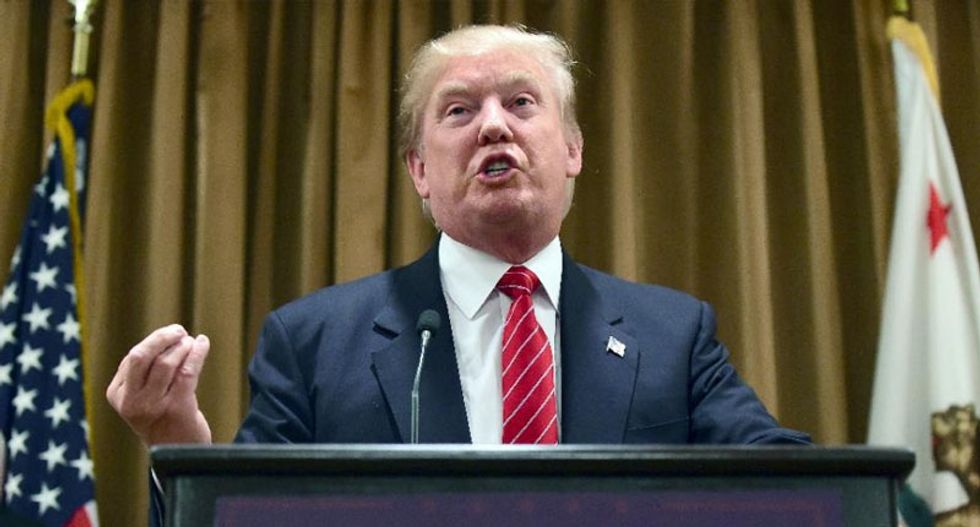 “Wages in are [sic] country are too low, good jobs are too few, and people have lost faith in our leaders. We need smart and strong leadership now!” Trump tweeted on Monday.

The opinion appeared to reverse what the Republican frontrunner said in November during the fourth Republican debate. Asked if he was sympathetic to the protesters demanding a $15-an-hour minimum wage, Trump said “I can’t be.”

Related: Bernie Sanders: I can win the backing of Donald Trump supporters

“[T]axes too high, wages too high, we’re not going to be able to compete against the world. I hate to say it, but we have to leave [the minimum wage] the way it is,” Trump said at the time . “People have to go out, they have to work really hard and have to get into that upper stratum. But we cannot do this if we are going to compete with the rest of the world. We just can’t do it.”

Bernie Sanders, a senator from Vermont, used those comments to criticize Trump while appearing on CBS Face the Nation on Sunday.

“This is a guy who does not want to raise minimum wage,” he said of Trump. “In fact, he has said that wages in America are too high.”

Trump lashed back at Sanders, tweeting: “[Bernie Sanders]- who blew his campaign when he gave Hillary a pass on her e-mail crime, said that I feel wages in America are too high. Lie!”

In the days after the fourth Republican debate, Trump attempted to clarify that he was not speaking of wages in general, just about the US federal minimum wage which has remained at $7.25 since July 2009.

Related: Can Donald Trump's social media genius take him all the way to the White House?

Pundits and prominent Democrats like Obama, former secretary of state Hillary Clinton and Sanders have all noted that one of the main reasons that Trump’s campaign has gained traction with so many Americans is because of the struggling middle class.

In his Monday morning tweets, Trump touched on these topics – noting that wages had barely grown in the past few years.

“The middle-class has worked so hard, are not getting the kind of jobs that they have long dreamed of – and no effective raise in years. BAD,” Trump tweeted. “Many of the great jobs that the people of our country want are long gone, shipped to other countries. We now are part time, sad! I WILL FIX!”

Related: Trump's tax proposal is 'nothing radical' – and the richest get the biggest cuts

According to the US Department of Labor, US wages had grown by just 2.3% over the past 12 months. The wage growth would have to reach 3.5% to 4% for lowest-paid Americans to feel that impact of the recovering economy. The Department of Labor has referred to the US wages as the “unfinished business of this recovery” and Janet Yellen, chair of the US Federal Reserve, said the Fed expects wages to grow in 2016.

The frustration and anger felt by Trump’s supporters makes them into potential Sanders supporters, according to the Vermont senator. Trump disagrees.

“Strange, but I see wacko Bernie Sanders allies coming over to me because I’m lowering taxes, while he will double & triple them, a disaster!” he tweeted on Monday.

An analysis of Trump’s tax proposal revealed that the most generous tax cuts would be received by the rich, since the poor Americans Trump spoke of already do not pay any taxes.

Christopher Wray, the Trump-appointed Director of the Federal Bureau of Investigation, is in hot water as former Dept. of Justice officials express concern, with some calling for his resignation.

"Christopher Wray has a problem and it’s coming from inside the house," says Asha Rangappa, a former FBI Special Agent, a senior lecturer at Yale University’s Jackson Institute for Global Affairs, a legal and national security analyst, and a CNN commentator.