Families of two killed by Chicago police demand answers: 'Where does it end?' 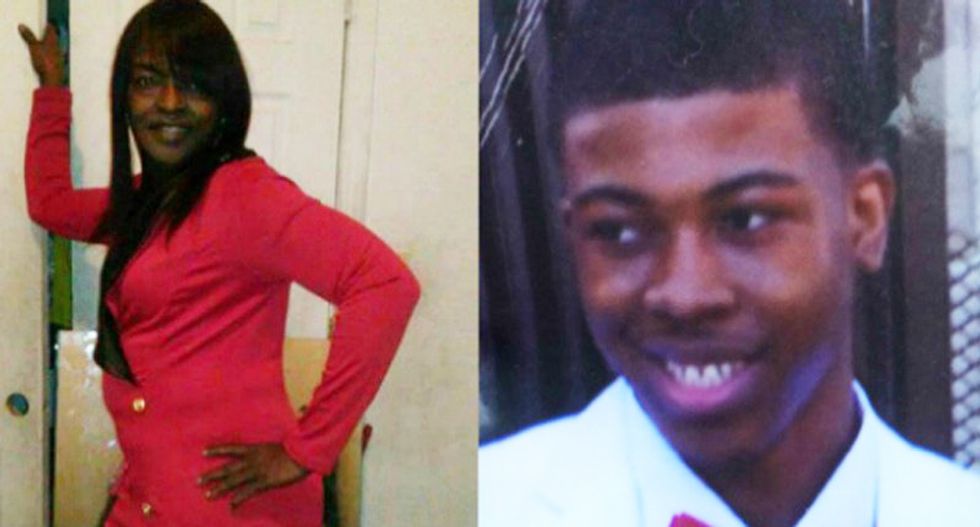 Family members of two people killed by Chicago police on Saturday demanded answers after police acknowledged that one of the victims was killed accidentally.

Chicago police fatally shot Bettie Jones, 55, and Quintonio Legrier, 19, around 4.25am while responding to a domestic disturbance call where they lived, said police.

On Saturday night, police said that Jones was “accidentally struck and tragically killed” in the shooting. Police said an officer’s weapon was discharged after police were “confronted by a combative subject”.

Legrier’s mother, Janet Cooksey, said at a press conference Sunday that the 19-year-old’s father called police while the two were arguing but said her son, an honor roll student, did not have a history of aggressive behavior. The father was with lawyers during the press conference, she said.

“When is the mayor going to help us?” said Cooksey. “The police have failed us.”

The crowd of supporters nodded their heads as Cooksey spoke about people in the neighborhood not being able to trust the Chicago police department, which is currently the subject of a Justice Department civil rights investigation .

“I would grieve for other mothers, other family members; now I’m grieving for myself,” said Cooksey. “When does it come to an end?”

She said her son ran the 2013 Chicago marathon for charity, but she was unable to attend because she was at work. Her voice cracked as she said now she will never get memories like that because her son is dead.

Legrier’s great aunt said people should not be hateful toward the police department, though it is hard to look at the badge when someone you love has been gunned down by an office. “I stand here because I love my nephew but I also stand for the other young teenagers who have got shot down in the streets like dogs,” Turner said.

A vigil was being held in Jones’s honor on Sunday afternoon at the scene of the shooting. The mother of five was was part of the community activist group Action Now, working to fight economic injustice and gun violence in Chicago.

Jacqueline Walker, who said she known Jones since they were children, cried as she talked about her friend’s death. “We played together every day, and for me to look at the news and see she was shot down, a beautiful woman, it hurts my heart,” Walker said.

She, like many others, called on the city’s mayor, Rahm Emanuel, to answer for the police killings, while wearing a t-shirt that said “Rahm failed us”.

“Why you get to shoot first and ask questions later?” Walker said. “This is ridiculous.”

Jahmal Cole, Jones’s nephew, said that members of Jones’s family had been at her house to celebrate Christmas the night she was shot. They were having fun, playing spades and drinking. “She should not have to open the door and be shot by the police officer,” Cole said.

Like his aunt, Cole is active in the community. He founded the organization My Block, My Hood, My City , which introduces young people to parts of the city they would not normally get to experience.

Cole called on people to interact more with people from other neighborhoods to address community issues that aren’t being handled by an untrustworthy police department and unreliable city government. “Chicago is only as strong as its most under-resourced community,” Cole said.

The shooting is being investigated by the Independent Police Review Authority, a civilian police oversight committee. Emanuel said evidence from the investigation will also be shared with the Cook County state’s attorney’s office.

Emanuel said in a statement: “Anytime an officer uses force the public deserves answers, and regardless of the circumstances we all grieve anytime there is a loss of life in our city.”