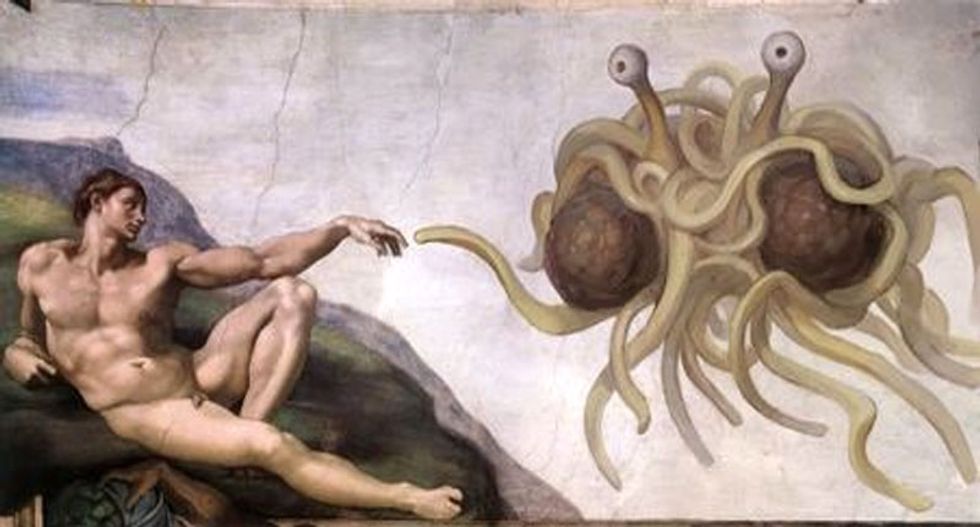 The Florida Capitol rotunda this Christmas season will be home to a Gay Pride Festivus pole made from beer cans, a 9-foot-tall menorah and maybe even a homage to the Flying Spaghetti Monster -- but probably not a Nativity scene.

The state’s Department of Management Services has approved atheist activist Chaz Stevens's beer pole -- a holiday display from the made-up “Festivus” religion in the sitcom Seinfeld -- and the Hanukkah menorah, according to FloridaPolitics.com.

The Department also recently received a request to display the Flying Spaghetti Monster, a satirical deity worshipped by so-called “Pastafarians.”

“This display will communicate and represent the belief systems of atheists, agnostics, secular humanists, and other irreligious citizens of the state of Florida,” the application for the Flying Spaghetti Monster display says. It is “intended to inspire a sense of community and belonging for all those who view it.”

But the group that typically applies to place a Nativity scene in the Florida State Capitol in Tallahassee has decided not to do so this year.

"My hope is that the Christ in Christmas is louder than a wood display and some figurines," Pam Olsen, president of the Florida Prayer Network, explained to the Miami Herald.

"I have been pondering this for a while," Olsen said. "The racial tensions and mass murders, the shootings at the Planned Parenthood and in California – something is very wrong in our country. We need to step back and say we need to stop. Let the sound of the Christ Child bring hope, joy and peace instead of dissension."

The Florida State Capitol has displayed a Christmas tree and menorah for many years. But holiday displays became a source of controversy in 2013 when state officials turned the rotunda into an open forum to allow a Nativity scene, provoking secular groups to ask for their own displays to be allowed.

The controversy lead some to declare that Florida was the frontline in the "war on Christmas."

“We pray that Christ’s message of hope and peace will be communicated in a much stronger way this year from Florida’s state Capitol, by us not placing the nativity in the rotunda,” Olsen said, adding that her group was not “retreating.”

The group Americans United for the Separation of Church and State said the message to government should be clear.

"Let this saga be a lesson to government officials who want to promote religion in public buildings. It’s just not worth the trouble," the group wrote. "There are plenty of private spaces where religious symbols can be displayed. Government buildings should focus on government business – and that should never include promoting religion."