'No human being is illegal': The fight over the mislabeling of immigrants 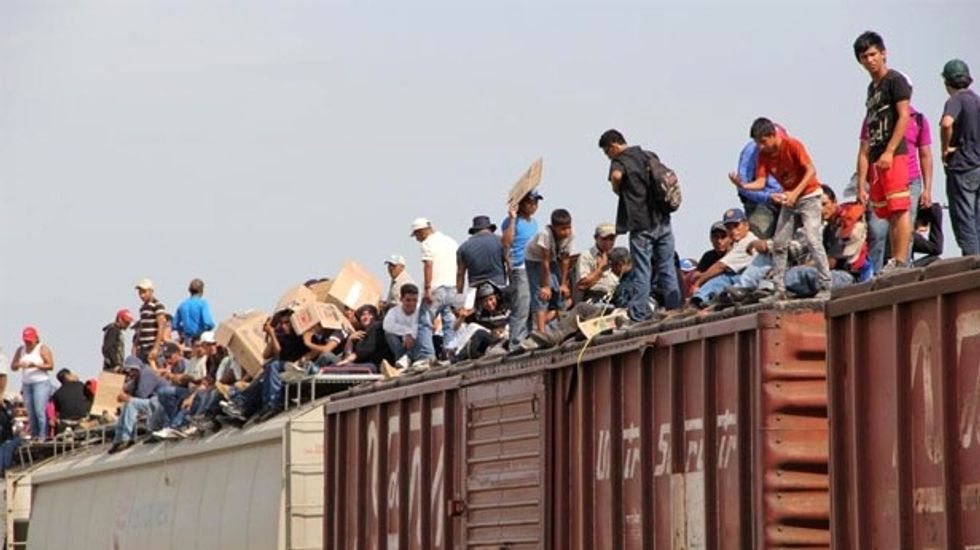 On a scorching day in May 2010, thousands of Latinos and immigration activists marched through the streets of downtown Phoenix in a mighty protest against SB1070, the so-called “show me your papers” law. Among the sea of protest signs was one with a more universal message: “No human being is illegal.”

In the years since, a linguistic dispute has welled up on the periphery of the highly charged debate over immigration reform – how to refer to the nearly 11 million people living in the US without legal residency?

“We don’t call pedestrians who cross in the middle of the road illegal pedestrians,” said Otto Santa Ana, a linguist and professor in UCLA’s Department of Chicana/o Studies. “A kid who skips school to go to Disneyland is not an illegal student. And yet that’s a sort of parallel.”

Santa Ana is among many linguists who argue that the phrase “illegal immigrants” is neither “accurate nor neutral”. Other law-breakers are not referred to as illegal, making immigrants an outlier in the naming system, he said.

The 2016 politics of ‘illegal immigrant’

Democratic frontrunner Hillary Clinton was recently drawn into the debate during a Facebook Q&A session when José Antonio Vargas, a Pulitzer Prize-winning journalist and immigration activist, asked her to pledge to stop using the phrase “illegal immigrant” .

Vargas noted in the post that Clinton had used the term at a campaign event in New Hampshire. She conceded that it had been a “poor choice of words” and committed to banishing the term from her lexicon.

“As I’ve said throughout this campaign, the people at the heart of this issue are children, parents, families, DREAMers ,” she wrote. “They have names, and hopes and dreams that deserve to be respected.”

Vargas said he was surprised by Clinton’s word choice, especially because she’s made her immigration plan a key pillar of her campaign.

“I am here illegally, without legal status, without authorization. Those are facts,” Vargas, who came to the US from the Philippines as a child, told the Guardian. “I as a person am not illegal because people can’t be illegal. Calling people illegal is not only factually inaccurate, it’s journalistically irresponsible.”

In 2011, Vargas founded Define American , an organization aimed at facilitating conversations around immigration. He recently launched a campaign called #WordsMatter with the goal of getting all the 2016 presidential candidates to commit to dropping the phrase “illegal immigrants”.

“I have always called immigrants New Americans because that is what they are,” he said, taking the pledge. “Words matter and remembering that we were all once strangers in a strange land and that the US is made better in every generation by the arrival of New Americans is central to my campaign.”

Vargas wants candidates to understand that their words matter – even more so in a campaign cycle so far dominated by the bombast of a billionaire businessman who began his campaign by describing Mexican immigrants as “rapists” who are “bringing crime”.

A Donald Trump speech often includes disparaging remarks about “illegal aliens”, a term activists say is offensive and dehumanizing. But it’s not just Trump. Republican contender Jeb Bush, who once referred to illegal immigration as an “act of love”, has come under fire for using the derogatory term “anchor babies” in reference to children who are born in the US to undocumented parents.

“The Republican party is making a safe space for really racist undertones against undocumented immigrants and that is facilitated when the media reproduces this,” said José Luis Benavides, journalism professor at California State University, Northridge.

Benavides said that for many Americans, “illegal immigrant” is synonymous with Mexican, and specifically someone who crossed the US’s southern border unlawfully. But that’s an inaccurate framing of debate.

“The words that the candidates use frame the political conversation,” Benavides. “Using dehumanizing language then makes it easier for people to justify dangerous policies against a particularly group. Words really do matter.”

The term “illegal immigrant” wasn’t widely used to describe a population of people until the second world war, when the media began ascribing it to Jews fleeing to Palestine without authorization. In fact, it was Holocaust survivor and Nobel peace prize winner Elie Wiesel who first framed the debate: “You who are so-called illegal aliens must know that no human being is illegal.”

Beyond being inaccurate, the current vocabulary used to describe immigrants is polarizing, with politicians on the right preferring “illegal” and those on the left opting for “undocumented”, Santa Ana said. Instead, he advocates for “unauthorized”, which he says “underscores that they should not be here without highlighting criminality”, or simply describing the person’s immigration.

Several news organizations have dropped the term. The Associated Press struck the phrase from its style guide in 2013, opting instead to describe the circumstances of the immigrants’ arrival in the US. The news agency also concluded that “undocumented” was incorrect because many immigrants have some form of documentation but not the ones required for legal residency.

After the AP’s decision, USA Today, the Los Angeles Times, the Huffington Post and ABC followed in kind.

The New York Times and CNN have been under pressure by activist groups to remove the term from their style guides. The Times’ public editor, Margaret Sullivan, has addressed the issue a number of times, writing in a 2013 post : “So many people find it offensive to refer to a person with an adjective like ‘illegal’ that I now favor the use of ‘undocumented’ or ‘unauthorized’ as alternatives.”

For some, any descriptor reads like a euphemism for the uglier slurs used in the past to malign immigrants and Latinos in particular.

“Why not just call them immigrants?” suggested Gustavo Arellano, editor of OC Weekly and author of the ¡ Ask a Mexican ! column “That is what they are, whether they’re undocumented or not.”