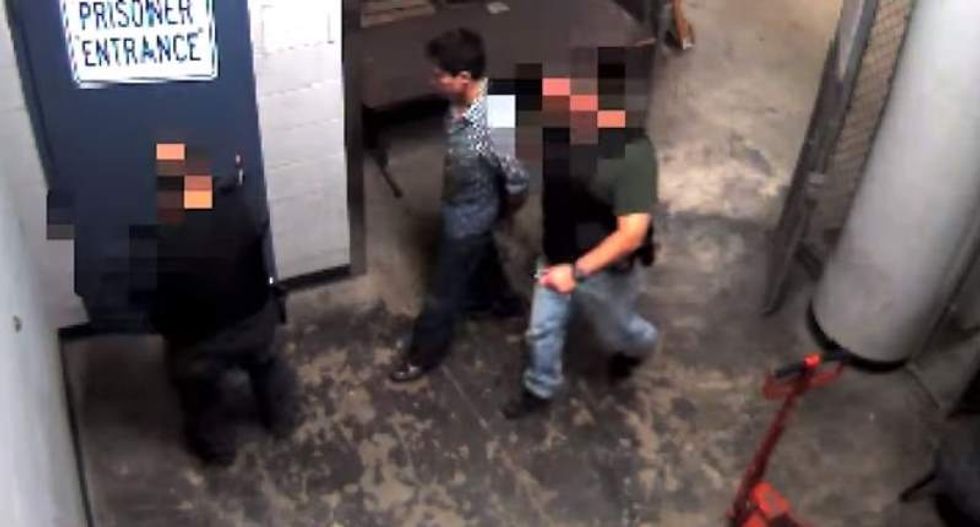 Garry McCarthy forced to resign over video of black teenager’s death, but politicians and activists say hearing on off-the-books ‘black site’ must follow

By Nicky Woolf in New York and Kevin Gosztola in Chicago

The secretive Chicago police facility exposed by the Guardian will fall under sworn public testimony for the first time in the wake of a forced resignation by the city’s police chief amid a scandal over the shooting of a black teenager.

The renewed scrutiny of Homan Square -- an interrogation warehouse that been to described as the equivalent of a CIA “black site” and now a “torture chamber” on American soil -- was immediate, stretching from national activists and the local Black Lives Matter chapter to an Illinois politician who planned to announce on Tuesday an official hearing into the site as a direct result of the firing.

“The murder of Laquan McDonald and the attempted cover-up of that murder over a period of 13 months casts even more doubt on the repeated police denials of wrongdoing at Homan Square,” Cook County commissioner Richard Boykin said in a statement provided to the Guardian.

“As recent events have shown, when left to its own devices, the Chicago police department will revert to a culture that suppresses wrongdoing and protects wrongdoers,” added Boykin. He has repeatedly pressed Barack Obama’s administration to examine a facility where his former chief aide and Chicago mayor Rahm Emanuel has said his police “follow all the rules” -- despite more than 20 people who have come forward to the Guardian with claims of unconstitutional abuse and detention.

Boykin said in an interview that he was “hopeful” the hearing of the Cook County board of commissioners -- the city’s first official political meeting focused on Homan Square beyond protests and hearings for an ongoing Guardian lawsuit -- would precipitate change, “and that we can shut [Homan Square] down in terms of illegal detentions and off-the-books detentions”. He said the hearing would also look at other “systemic changes” to protect Chicago citizens against rogue police officers.

The announcement was expected just hours after the resignation of police superintendent Garry McCarthy, who was asked to step down by Emanuel over his handling of the death of Laquan McDonald, who was shot 16 times by a Chicago police officer last year.

Protests have swept Chicago in the days surrounding the release, on a court order, of dashcam footage showing McDonald’s death. Emanuel announced on Tuesday a six-person taskforce, including former Massachusetts governor Deval Patrick, which will be taking on a “top-to-bottom review” of Chicago’s police force.

“There are systematic challenges that will require sustained reforms,” Emanuel admitted in rare extended remarks before the press on reform efforts to the city’s notoriously brutal police force. “I am just as responsible and as accountable.”

Civil rights groups, activists and politicians welcomed McCarthy’s resignation, but continued to press for accountability from what many see as a culture of secrecy and abuse within and around the Chicago police department.

Boykin described the taskforce announced by the mayor as “window-dressing” and called for a federal investigation into Emanuel’s role in the McDonald case. The American Civil Liberties Union called for a similar follow-up inquiry and also linked it to interrogations at the facility revealed by the Guardian.

“We think any investigation of this matter is good,” said Ed Yohnka, director of communications and public policy at the ACLU of Illinois. “Indeed we have called for a full-fledged federal investigation into CPD after the McDonald video which could include Homan Square.”

“Our movement to have Homan Square closed also impacted the mayor’s decision, but it hasn’t impacted enough to make him close Homan Square, which he has the executive power, responsibility and duty to do,” Chapman added.

Hoping for a kind of domino effect from the McDonald protests, he said a new demonstration had been planned for 10 December to renew activist groups’ push to shut down Homan Square, which he compared to “a torture chamber”: “How can you allow a place that tortures people to continue to operate? How is that possible? How come the federal government hasn’t made a move about this? This is a blatant violation of people’s federally protected constitutional rights.”

One of those dominos may fall soon: Anita Alvarez, the state’s attorney of Cook County, from whom congressman Luis Gutierrez withdrew his support Tuesday afternoon.

Aislinn Sol, a leader of the Chicago chapter of Black Lives Matter, said Emanuel, McCarthy and Alvarez had continued to “expose their complicity in the system of policing in Chicago which includes the running of Homan Square, a black site; former commander Jon Burge, who tortured over 119 black men; and the continued torture and murder and brutality that is a day-to-day reality of policing in the city of Chicago”.

Charlene Carruthers, organizer with the Black Youth Project 100 Chicago chapter, called for both Emanuel and Alvarez to resign, saying they “lead a city where it’s very clear that the police yield abusive power over people, and they’re complicit in it. They know that it’s happening. It includes Laquan McDonald, and it goes far, far, far beyond what happened to Laquan.”

The special hearing of the county commissioners – featuring “the testimony of witnesses with firsthand knowledge of police operations at Homan Square” – is scheduled for 15 December.

Additional reporting by Zach Stafford in Chicago and Matt Sullivan in New York.