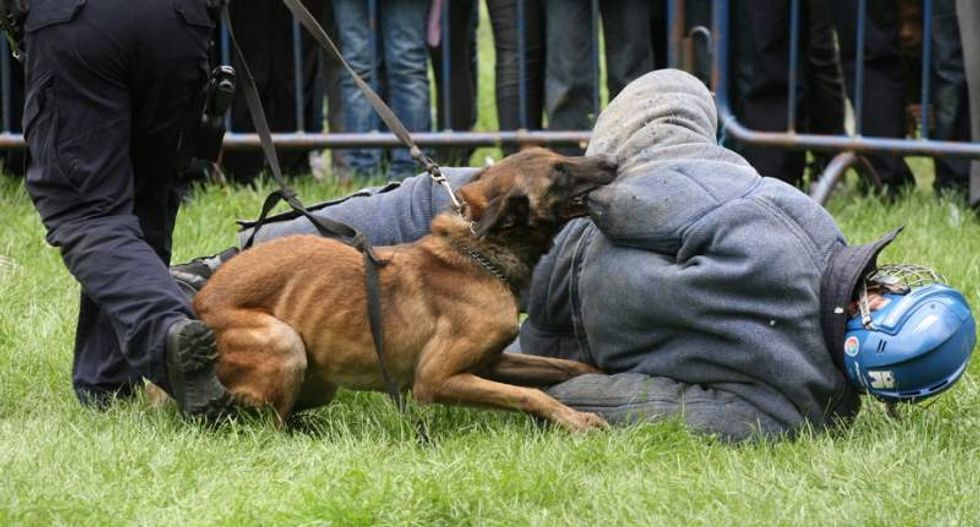 A Florida police department's use of K9 officers has come under increased scrutiny, including one incident in which a human officer was apparently goading a colleague into using his dog on a then 18-year-old man described as suicidal, the Sarasota Herald-Tribune reported.

"I remember hitting the ground on my hands to brace myself from falling, and I looked up at them, and I went to say 'OK, OK,' and the guy sicced the dog on me as soon as I started to talk," Jared Lemay said of the encounter. "I remember [the dog's] mouth coming toward me and latching onto my face. He literally drug me out of the trash can."

According to police records, North Port K-9 handler Keith Bush was dispatched to Lemay's home in July 2012 after Lemay's mother called authorities saying she was afraid he would try to hurt himself, and that her daughter found a noose in the garage.

Lemay, who was hiding inside a trash can at the time, has said he was depressed and contemplating killing himself. He was also wanted by police for violating his probation after being found guilty of unarmed burglary and "resisting an officer without violence."

Before reaching the house, though, records show Bush sent a text message to another K-9 handler, Michael Dietz, saying, "COME GET UR [sic] BITE." He sent a follow-up message a few minutes later saying, "IM GONNA TAKE UR BITE IF U DONT HURRY UP."

Both Bush and Dietz went to Lemay's home. They reported at the time that the garage in which Lemay was hiding did not have any lights, an allegation Lemay rejected. He told the Herald Tribune that not only did the lights work, but one officer opened the can lid, saw him, then closed it again before one of the two officers -- identified as Bush in police records -- pushed it over.

Lemay was subsequently bitten in the face and the back, and was hospitalized. Later, Bush discussed the incident with another officer, Brandon McHale, via text message, with McHale saying, "COULDA BEEN WORSE THEN, HE SHOULD HAVE COMPLIED."

Bush is now the department's senior K-9 handler. The Herald-Tribune reported that dogs used by the department have been used to attack suspects in nearly 37 percent of apprehensions by that unit. Authorities said in a statement that they had determined the K-9 unit to "have acted in accordance within the law and in keeping with best practices."

By contrast, the report stated, many law enforcement agencies monitor K-9 units for misconduct if dog attacks occur in more than 30 percent of their arrests.

Lemay said he intends to file a lawsuit against the department. It would be the third suit involving Bush and his animal, Tomy, which has bitten 25 people over the past three years.

"I don't see how anyone in their right mind would rightfully justify doing something like that," Lemay said. "Especially given the circumstances."

While Bush's text messages concerning the encounter were not investigated at the time, the Herald Tribune said that he was issued a memorandum of counseling on July 21, 2014 -- the same day the newspaper asked for records tied to biting incidents involving K-9 officers.

"This memorandum of counseling shall be characterized as a corrective rather than punitive action. Further violations will result in progressive discipline," the document stated.

A Florida high school teacher was fired after he was caught on video berating a student who wouldn't stand for the Pledge of Allegiance, the Brandenton Herald reports.

Art teacher Robert Reiber yelling that student for "sitting on your butt" as the Pledge was recited. “Don’t shake your leg,” he continued. “If you wanna do something, get up and do it. I’ll defend my country til the very end.”

House Republican recently unveiled a slick new video promoting their MAGA policy agenda. The problem is that the videos weren't of the United States, they were from Russia and Ukraine, according to The Huffington Post.

According to the report, the House Republicans used stock videos to convey parts of the U.S. with a narrator's voice talking about what it means to be an American.