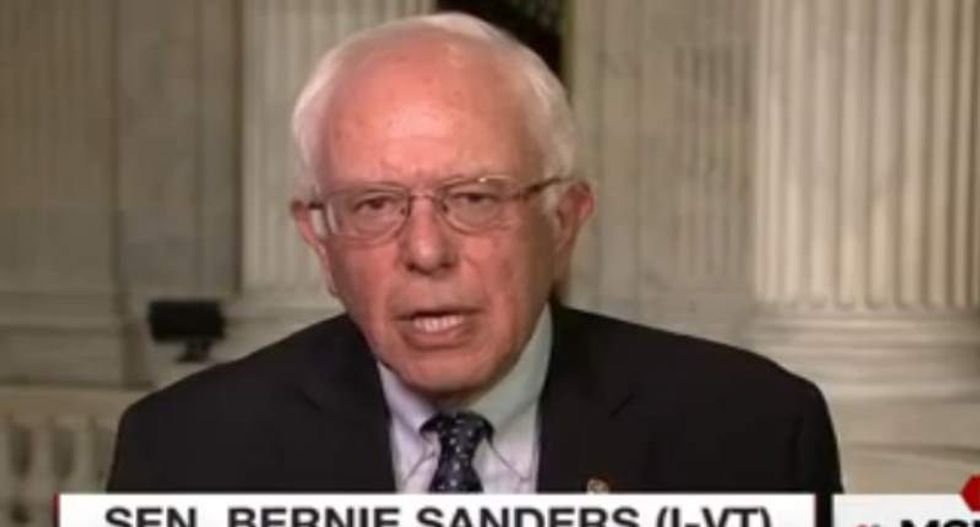 The campaign manager for Sen. Bernie Sanders blasted the Democratic National Committee on Friday, accusing them working in the best interests of rival Hillary Clinton for the 2016 Democratic presidential nomination by shutting them out of the DNC's database after a security breach.

Speaking to the press, Sanders' campaign manager Jeff Weaver admitted that a campaign worker accessed Clinton voter files on Wednesday, due to a brief software glitch. According to Weaver, they don't have any evidence that the staffer downloaded any info, and that by freezing them out, the DNC has prevented them from accessing some of their own voter data at an important stage of the campaign.

"It is our information and the information of all of these volunteers and the people who support our campaign, not the DNC's. In other words  -- by their action -- the leadership of the Democratic National Committee is now actively attempting to undermine our campaign," Weaver explained. "This is unacceptable. Individual leaders of the DNC can support Hillary Clinton in any way they want, but they are not going to sabotage our campaign, one of the strongest grassroots campaigns in modern history."

Further linking the Clinton campaign to sanctions of the DNC, Weaver reminded the press of the decision of the DNC to hold the last Democratic debate on a Saturday night, guaranteeing less exposure for Sanders' insurgent campaign against the front runner.

"I don't know the motivation of every single person of the DNC.  But I think if you look at a pattern of conduct, we obviously have concern about the Saturday night debate schedule and its impact on the ability of campaigns to get their message out. Clearly in this case it looks like they are trying to help the Clinton campaign," Weaver said.

"I'm sure there are people within the democratic establishment who are not happy about the overwhelming success Sen. Sanders is having all across this country," he continued. "To do that, we need our data which has been stolen by the DNC."

The Sanders campaign fired the staffer Friday morning, and indicated at the news conference that they will sue the DNC in federal court unless access is restored.

Update, 5:36 p.m. EST: Sanders' campaign announced in a statement that it carried out its threat to sue the committee for breach of contract.

"To the extent that the DNC is obligated to protect the confidential information of the other campaigns by virtue of Voter Data Agreements separately executed with those campaigns, it is the DNC and not [Sanders'] campaign that is in breach of those contractual duties," the lawsuit stated. "The campaign should not be punished for the carelessness of the DNC and its third-party vendor."

Update, 12:17 a.m. EST, Dec. 19: The campaign reached an agreement with the DNC late Friday night allowing the Sanders camp to regain access to the data on Saturday morning.