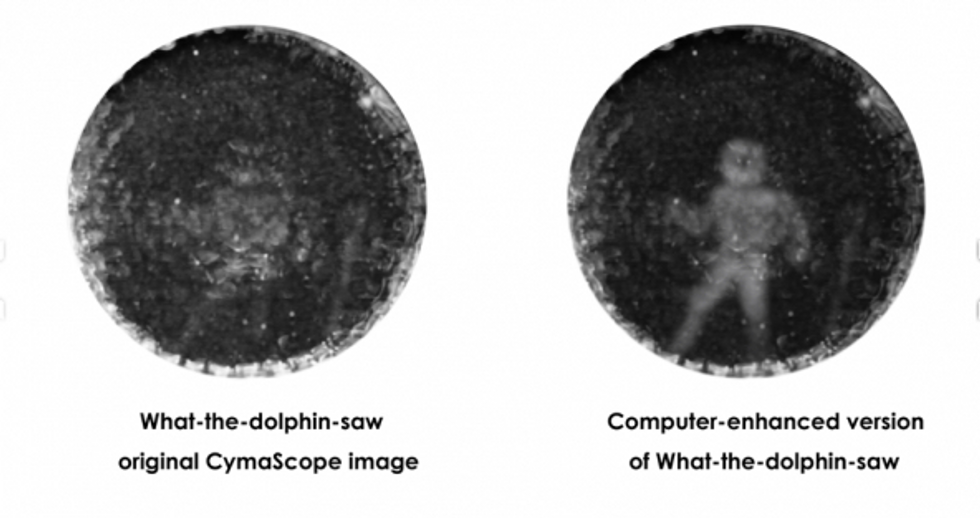 CymaScope image shows how a dolphin saw a submerged man, with a computer-enhanced image at right (SpeakDolphin.com/CymaScope Laboratory)

A recent experiment suggests dolphins may speak to one another in a type of holographic language that may be understood by humans.

Researchers in Miami and the United Kingdom announced last week that they had successfully created the first 3-D prints using data extracted from recordings of dolphin echolocation.

“Our recent success has left us all speechless," said research team leader Jack Kassewitz, of SpeakDolphin.com. "We now think it is safe to speculate that dolphins may employ a ‘sono-pictorial’ form of language, a language of pictures that they share with each other. If that proves to be true, an exciting future lies ahead for interspecies communications.”

Scientists made the prints using a complicated process of recording and then isolating the high-pitched clicks dolphins make to estimate distances and visualize objects underwater.

One of the scientists, Jim McDonough, submerged himself in front of the female dolphin "Amaya" in a pool at the Dolphin Discovery Center in Puerto Aventuras, Mexico.

He exhaled all the air from his lungs to overcome his natural buoyancy and to avoid bubbles from a breathing apparatus, and the dolphin directed her echolocation at McDonough.

Other researchers then used high-specification audio equipment to record the dolphin's signal, and they sent those recordings to the CymaScope laboratory in the United Kingdom.

Acoustic physics researcher John Stuart Reid first made two-dimensional images from these recordings and then used photo analysis to extract data and three-dimensionally imprint the signal onto a water membrane.

“When a dolphin scans an object with its high frequency sound beam, each short click captures a still image, similar to a camera taking photographs," Reid said. "Each dolphin click is a pulse of pure sound that becomes modulated by the shape of the object.”

Kassewitz said the CymaScope test represented a breakthrough in a decade-long effort to better understand how dolphins communicate.

“When we discovered that dolphins not exposed to the echolocation experiment could identify objects from recorded dolphin sounds with 92 percent accuracy, we began to look for a way for to see what was in those sounds,” Kassewitz said.

He said the test also revealed that dolphins can see surface features, such as the weight belt McDonough wore during the experiment.

Researchers suspect that dolphin echolocation signals could result in more detailed and clear mental images than they previously believed.

"Seeing the 3-D print of a human being left us all speechless," Kassewitz said. "For the first time ever, we may be holding in our hands a glimpse into what cetaceans see with sound. Nearly every experiment is bringing us more images with more detail.”

The researchers plan to publish their findings in an upcoming paper, and a television documentary is also being developed by award-winning filmmaker Michael Watchulonis and David Albareda of Devised TV.