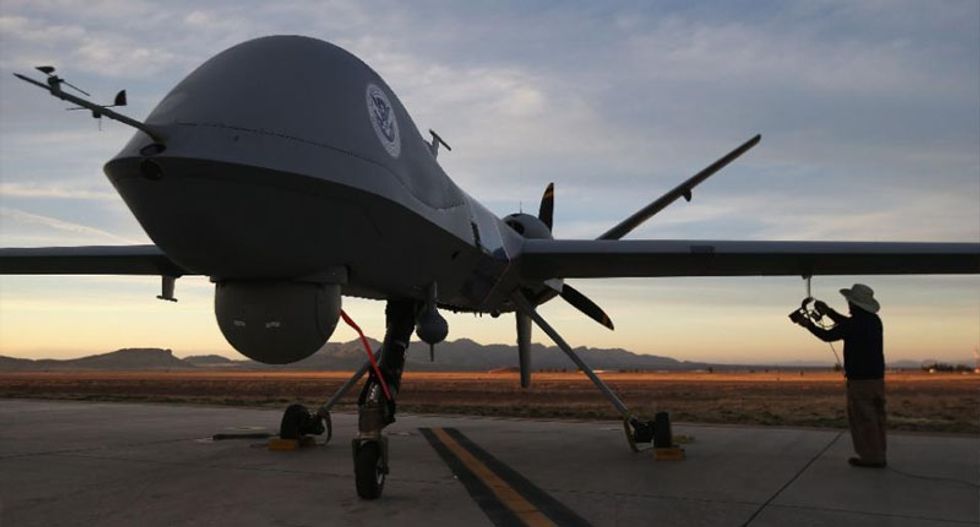 The high costs of running the Islamic State’s “caliphate” and fighting a ground war are largely met from selling oil, supplemented with donations and money extorted from Christians and hostages. Preventing the jihadists from profiting from oilfields under its control should be a priority for the military coalition – indeed, Britain’s first strikes in Syria were against oilfields.

But the coalition already has the capacity to stop the illegal oil trade. High above Syria and Iraq, beyond the range of any IS missiles, are US and UK surveillance and strike drones such as the Predator and Reaper. These can operate for up to 24 hours, equipped with excellent sensors including synthetic aperture radar – sideways-looking radar that uses the flight path of the aircraft to electronically simulate an extremely large antenna. This continuously generates extremely high-resolution imagery even through cloud and sandstorms.

An example of the detail possible from SAR images. (Sandia)

These are the weapons with which to cut off IS’s oil trade income, estimated at US$50m a month (US$600m a year). While looted banks and military bases provided IS with a reported war chest of US$1.5-$2 billion, this oil income is vital to pay the salaries of its administrators and fighters, around US$500m a year, buy black market weaponry estimated at US$1 billion, and other essentials that bring annual costs to around US$2 billion.

Using surveillance aircraft/drones alongside attack drones, crude oil movement can be stopped. In parallel, bankers should be persuaded to block anonymous donation funding through the financial networks.

IS is shipping around 25,000 barrels of crude oil a day to Turkey by road tanker, sold on the black market for as little as US$25 a barrel – then a quarter of market price. Now it sells to rogue traders in organised operations within Iraq and Syria.

Why is cutting off the oil trade supporting IS not being addressed more enthusiastically? Russian strikes have inflicted damage on the tanker fleets, but of 10,600 coalition strikes, only 196 have targeted oil infrastructure. With better use of airborne surveillance it would be easier to identify and destroy the tankers used to move illicit crude oil, cutting off this vital source of income and hastening an end to the conflict.

Stopping the flow of oil

Major IS-controlled oil wells lie between al-Qaim in Iraq in northern Iraq and Deir Ezzor in Syria, 100km southeast of Raqqa. IS uses mobile refineries to process crude oil required for military and domestic use, but also transports crude oil by road through IS held routes, via Aleppo and a northern corridor through “friendly” rebel-held areas, to southern Turkey.

There is oil trading within rebel-held areas, and Russia has also identified (as yet unconfirmed) that crude oil is also being transported from Deir al-Zour (aka Deir Ezzor) to Batman in Turkey. Russia was conducting air strikes in the rebel-held region through which the oil is transported when one of its Su-24 aircraft was shot down by a Turkish fighter.

A large road tanker can transport around 300 barrels, so carrying 25,000 barrels a day requires a minimum of 84 tanker trucks, assuming the round trip can be achieved in a single day. The round trip is approximately 600km, so the tankers could be spaced every 8km – any less and the convoys would be too dangerous. To target an individual truck in transit with guided missiles from manned aircraft would prove very expensive – more than the value of the tanker and the oil carried. But coalition drone pilots can patrol the routes used by the oil tankers continuously, calling in strikes from other aircraft or attacking where necessary.

Targeting the oil before it reaches the trading centres hidden in rebel-held territory would starve IS of the funds it relies upon. As Russian president Putin noted, severing IS’s support is the most effective way of shortening the conflict.

IS has learned from the North Vietnamese in its fight against the US, holding large areas of territory with small groups of troops who live among the civilian population – not in barracks and frontline positions. The approaches of conventional warfare will be difficult – this conflict demands smart thinking.