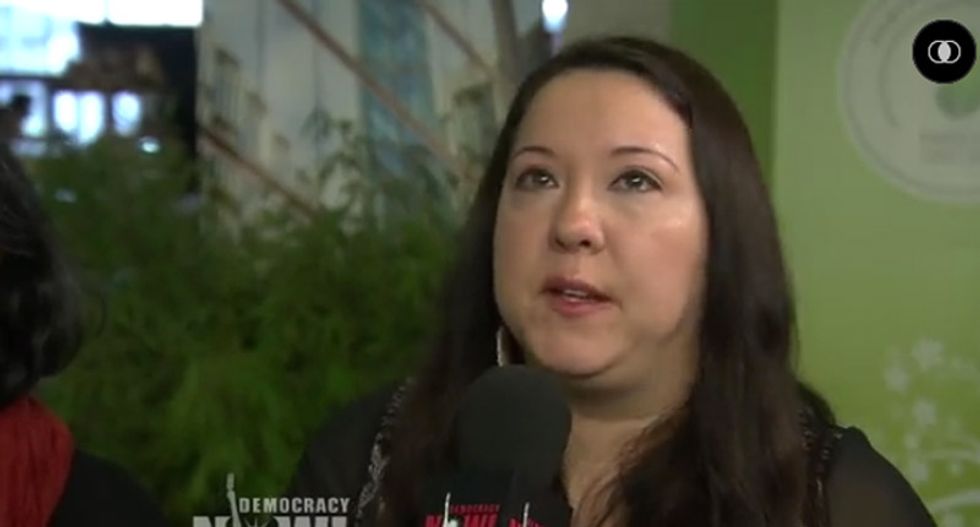 In an emotional interview with Democracy Now's Amy Goodman, a Native American activist from North Dakota explained the high cost on human lives that the fracking industry is taking on her community, saying it is turning it into a "sacrifice zone."

Appearing at the Paris Climate Summit, indigenous rights leader Kandi Mossett became teary-eyed as she described the influx of thousands of fracking workers living in "man camps" that have brought with them crime, drug usage and rape -- leading to a 168 percent increase in violent assaults against women.

Asked by host Goodman to explain conditions in North Dakota during the fracking boom, Mossett initially skipped over the environmental and health damage done by fracking to explain the societal impact of so many men flooding the communities.

"What we’re dealing with is a death by a thousand cuts. We have people that are literally on the front lines being killed by all of the semi traffic, by the increase in violence against women," Mossett explained. "Ever since we’ve had the oil industry enter, we’ve had these jobs that were created n-- but there were 11,000 jobs created and over 10,000 people that came into our state. And we’ve had violence against women increase by 168 percent, particularly in the area of rape. We have 14-, 15- and 16-year-old girls that are willingly going into man camps and selling themselves."

"We call them that because there are literally thousands of men living in these hovels. They’re like FEMA trailers or RV parks or wherever they can find space, that used to be a wheat field or a sunflower field, is now an oil-fracking operation," she said. "And so we’ve seen an increase greatly of crime and violence, drug abuse. I have buried two young girls, my friends, this last year, who got addicted to the heroin, because we now have organized crime."

Turning to environmental degradation, tears streamed down Mossett's face as she described her fears for her two-and-a-half-year-old daughter and what she may have to face one day.

"As far as the environmental toxins, we won’t even feel the effects for 20 years," she explained. "And I’m so worried that at this COP21 my two-and-a-half-year-old daughter won’t have a say, but she will be experiencing the worst impacts. And it just doesn’t make any sense to me that this is the 21st COP and we are considered sacrifice zones in my community."