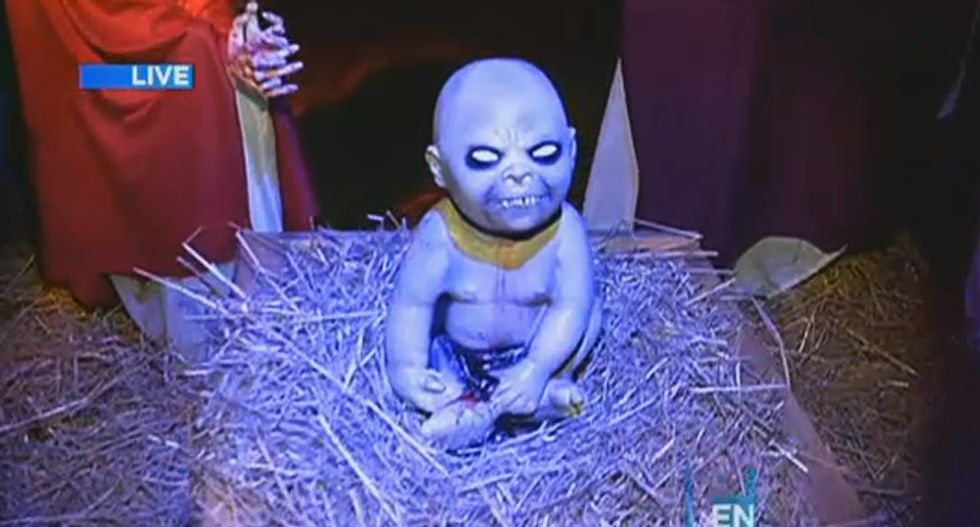 An Ohio man is under fire from local authorities for setting up a zombie nativity scene against town wishes, Fox 19 reports.

For the second year in a row, Jasen Dixon, who manages the “13 Rooms of Doom” haunted house, set up a manger featuring the undead honoring a zombie baby Jesus -- despite being ordered to take it down last year.

According to Sycamore Township officials, Dixon needed a permit for the macabre display this year. But when he applied he was turned down, and now he faces a fine of $500 per day for every day he leaves it up.

Having gone through the same situation last year before dismantling it, Dixon began soliciting donations earlier this year to cover the expected financial sanctions.

Friday night on his Facebook page, Dixon wrote: "We were going to take it down, decided to leave it up, all the lights are re-hooked and open for business just no roof. Let's see what happens."

According to Dixon, his request for a permit was denied because local authorities said his display violated the town’s zoning code by taking up more than 35 percent of his front yard.

“I got all the paperwork and how it was wrote out, and it says as long as it’s not over 200-square -foot that I can have it without a permit, and it’s about 65 square foot,” he explained, adding that he thinks the council hates the zombie theme.

"I think it's the theme,” he explained. “It just rubs people the wrong way. That's why they're coming down so hard on me.”

Dixon was already slapped with a $500 fine on Friday, but claims his neighbors are perfectly fine with the display.

“My father hates it. The other neighbors, they drive by and give me a thumbs-up,” he said.  However, he noted that Christian protesters handed out pamphlets Sunday in front of his display reading "God frowns upon this manger display," accompanied by Biblical verses.

Watch the video below, from Fox 19: