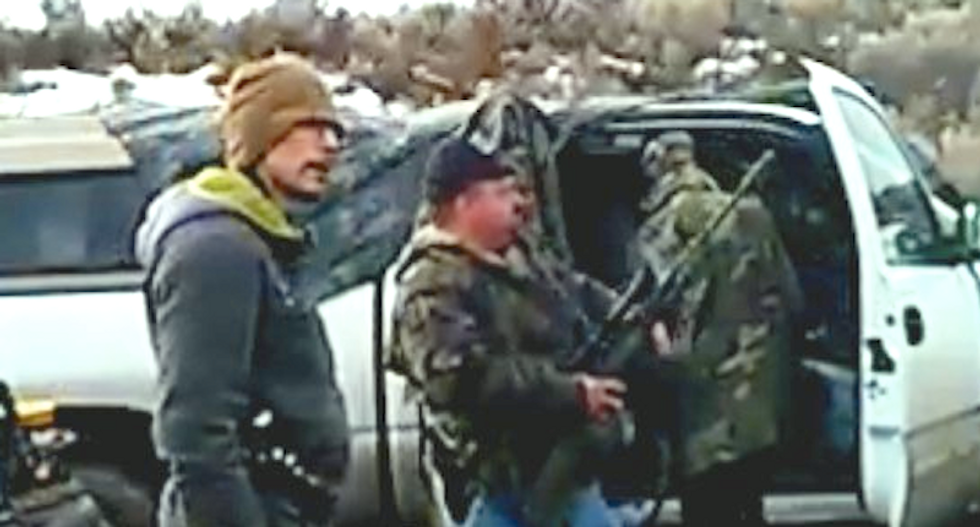 Law enforcement was working on Thursday to convince remaining protesters in a month-long armed occupation of a federal wildlife refuge in Oregon to leave the site following calls from the group's leader to stand down and the death of a member.

The FBI and local law enforcement have set up checkpoints near the Malheur National Wildlife Refuge in northeast Oregon and are working "around the clock to empty the refuge of the armed occupiers in the safest way possible," a statement said.

Eight more people had left the compound by late on Wednesday, the FBI said, and three were arrested and facing charges of felony conspiracy to impede federal officers.

It was unclear how many people remained inside the refuge, but one of them -- identified as David Fry, who is from suburban Cincinnati -- has been posting live streaming video of the holdouts as they drink beer, smoke marijuana and await an anticipated shootout with law enforcement officers.

"We're jut chilling, waiting for the government to pop us in the head or something," Fry said in one video. "Holding our ground."

The jailed leader of the protest, Ammon Bundy, urged supporters still occupying the site on Wednesday to head home.

"To those remaining at the refuge, I love you. Let us take this fight from here. Please stand down ... Please go home," Bundy said in a statement read by his attorney following a court hearing.

Bundy and at least a dozen armed individuals holed up at the refuge on Jan. 2 in a flare-up in the so-called Sagebrush Rebellion, a decades-old conflict over federal control of millions of acres in the West.

Law enforcement had kept an eye on the protest from afar until Tuesday, when Bundy and members of his group were stopped en route to a speaking event by the FBI and Oregon State Police. Shots were fired during the incident and a member of Bundy's group was killed, authorities said.

He was identified by activists as Robert LaVoy Finicum, a rancher who acted as a spokesman for the occupiers. Bundy's brother, Ryan, was wounded. Several members were arrested, including the Bundy brothers.

The protesters were each charged with conspiracy to use force and intimidation or threats to impede federal officers from discharging their duties.

Fry said some of the militants fled so quickly in "chaos" upon news of the Bundys' arrest that they left behind their guns, to which the remaining stragglers may have access.

Citing the investigation, authorities declined to say what led to the fatal shooting but urged the protest members to leave the refuge peacefully.

"I'm disappointed that a traffic stop yesterday that was supposed to bring peaceful resolution to this ended badly," Harney County Sheriff Dave Ward said during a Wednesday press conference.

Jason Patrick, who remained at the refuge following Bundy's arrest, told Reuters by phone some protesters were leaving through checkpoints, but he rejected the word "surrender."

Patrick was among the three arrested late Wednesday, according to the FBI.

Reactions to the takeover from residents in Burns, about 30 miles from the refuge, have included sympathy for two imprisoned local ranchers whose plight began the protest, to dismay at the armed occupation by individuals seen as outsiders.

Watch this video of the remaining militants discussing the arrests around a campfire: