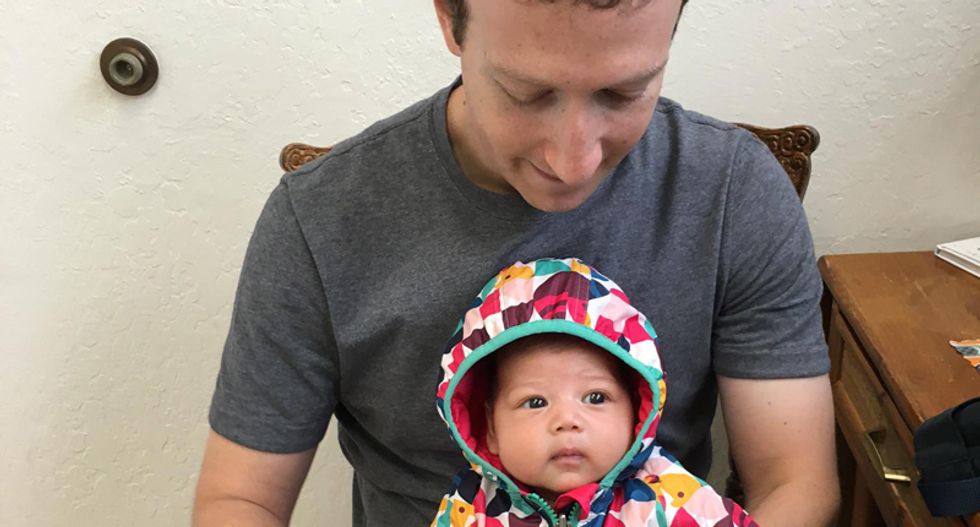 Facebook founder Mark Zuckerberg stirred up a hornet's nest of anti-science sentiment on Friday when he posted a photo on Facebook of himself with his daughter Max at the doctor's office.

The Facebook posting immediately drew both praise and condemnation for the tech billionaire, as supporters of childhood vaccinations battled with anti-vaxxers in the comments on a post that was "liked" over 2.5 million times.

Among the over 56,000 comments were many who praised Zuckerberg for caring about his daughter's health, including Stuart Duncan who wrote: "As someone with autism, with a son with autism, as someone who is constantly watching good people put their own children at serious risk because of old, fraudulent fears of vaccines and autism... thank you for being sensible. Thank you for doing what's right and also for showing everyone else that it's the right thing to do as well."

The anti-vaxx movement has fought against child hood immunizations based upon a since discredited study linking childhood vaccines to autism. The anti-vaxx movement recently funded a new study  looking for a link, only to have it blow up in their faces when researchers returned empty-handed.

Whether Zuckerberg's post was meant as a taunt or a simple reminder to get children vaccinated, the negative response was to be expected -- or as Laura-Kathleen Redman commented, " *patiently waits for anti-vaxxers to show up*"

And show up, they did.

"We all care about our kids. Growing up, my mom's best friend had a perfectly healthy daughter. She received MMR and had a grand mal seizure and suffered brain damage. Her dr diagnosed her with vaccine injury. She was left unable to talk or walk for the rest of her life. So that was MY first personal experience with vaccines," Amy Smith wrote. "Bottom line...A pharmaceutical that carries at least a risk of harm to some, should never be mandated. Because, in the end, no one seems to care about the 'sacrifices' made for the 'common good.'"

Colleen Kennedy wrote, "Herd immunity is a myth. Btw: the woman who contracted the Measles at Disneyland was fully vaccinated. Vaccines are largely ineffective and even if they don't result in Sudden Infant Death Syndrome or Autism Spectrum Disorder, as they did for 9 year old Hannah Poling: they are extremely unhealthy and filled with toxic levels of aluminum, human DNA (there are no studies about how our bodies react to foreign DNA)?! - they say that Thermimosal (another known neurotoxin was removed), but I can't trust the pharmaceutical industry. I'm so thankful to have a healthy child, who has a naturally strong immune system that functions the way God created it to."

"Pharmaceutical companies make HUGE profits off of a sick society . These same companies make vaccines to keep you healthy! Lol," Ian Humprhies added. "Use your head people.. Every goddamn childhood illness has become an epidemic."

"Thermerisol (sic), mercury, squaline, chicken embryos, and a list of other dangerous nuerotoxins are so good for babies," Matthew Bennedict added. "Any of you ever read the inserts on vaccines? The ingredients? I didnt think so."

Danielle Hill spoke for many pro-vaccination commenters when she sarcastically wrote: "OMG you're vaccinating your baby? Isn't that a little responsible? I mean don't you want to help run the risk of bringing back preventable illnesses?"