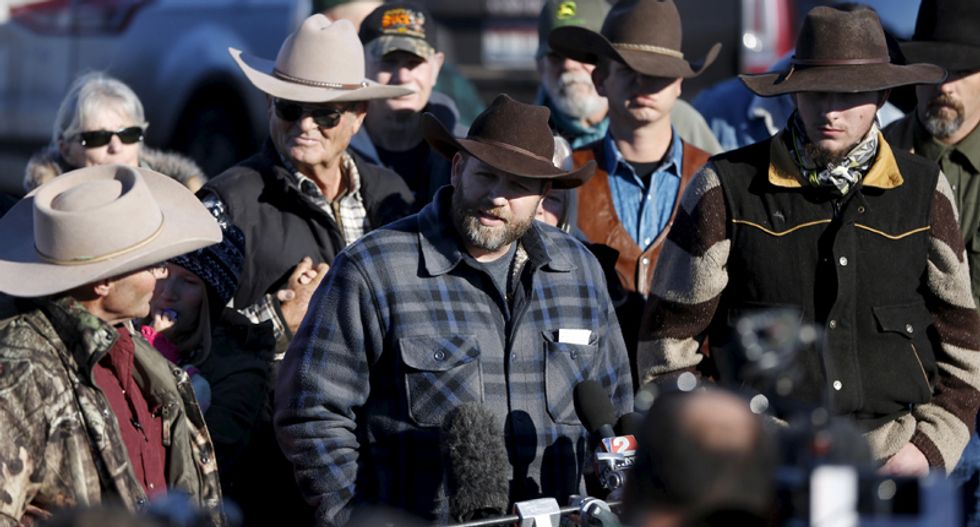 Leader of a group of armed protesters Ammon Bundy talks to the media at the Malheur National Wildlife Refuge near Burns, Oregon, January 8, 2016. REUTERS/Jim Urquhart

The suspect, arrested over allegedly unauthorized use of a government vehicle, was detained outside a Safeway supermarket in Burns, Oregon, some 30 miles from the Malheur national wildlife refuge.

He appears to have driven to the supermarket in a vehicle allegedly stolen from the the US Fish and Wildlife Service, which runs the refuge for rare birds.

Armed militia have been seen driving the government vehicles around the refuge ever since they took over the site in protest over federal land management policies earlier this month.

Police identified the suspect as Kenneth Medenbach, 62, of Crescent, Oregon.

“He was arrested on probable cause for unauthorized use of a motor vehicle,” the Harney County Sheriff’s office said in a statement.

A USFWS spokesperson Megan Nagel said: “The U.S. Fish and Wildlife Service is grateful for the quick actions from law enforcement. We will continue to work with law enforcement to recover vehicles bought and paid for by the American people to care for their national wildlife refuge.”

According to one local report , the two vehicles, one a pickup truck and one a passenger van, bore door signs reading “Harney County Resource Center” – the new name occupiers have given to the occupied sanctuary.