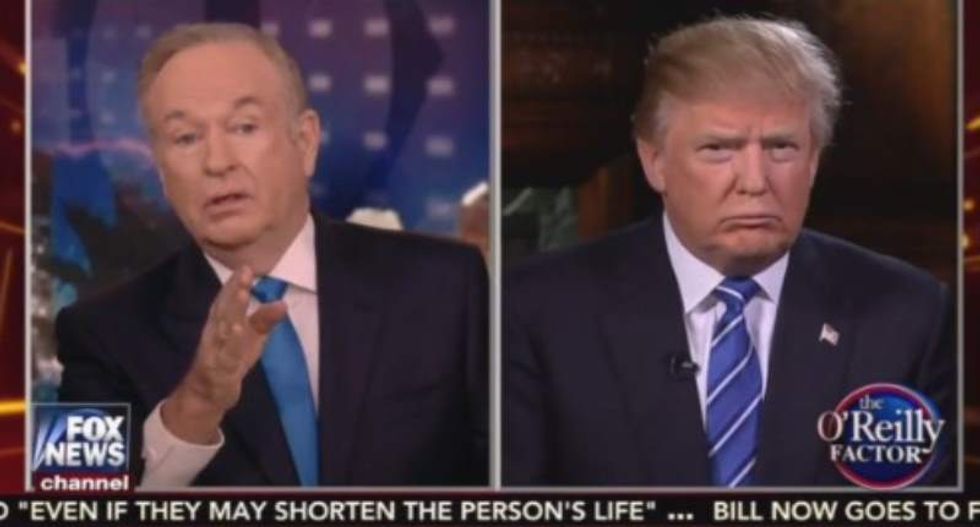 Fox News host Bill O'Reilly made the case to Donald Trump on Wednesday that the real estate mogul should re-enter the network's Republican candidate debate -- especially if he feels the moderators are biased against him.

The feud between Trump and Fox reignited this week after the Republican front-runner began balking at the prospect of taking part in Thursday's debate, claiming once again that O'Reilly's colleague Megyn Kelly was treating him unfairly. Kelly is slated to be one of the event's moderators.

On Tuesday, Trump confirmed that he would not attend, choosing instead to host a veterans' benefit event in Des Moines, Iowa. The network responded by releasing a statement accusing his campaign manager, Corey Lewandowski, of threatening the Kelly File host.

Trump noted during his interview with O'Reilly that he originally booked his appearance on the Factor last week, and continued to honor that commitment.

"Frankly, you're a lot tougher than Megyn Kelly, in my opinion," Trump told O'Reilly.

"It doesn't matter," O'Reilly responded. "Frankly, I'm trying to convince you that your tack is wrong because it's better for folks to see you in the debate format."