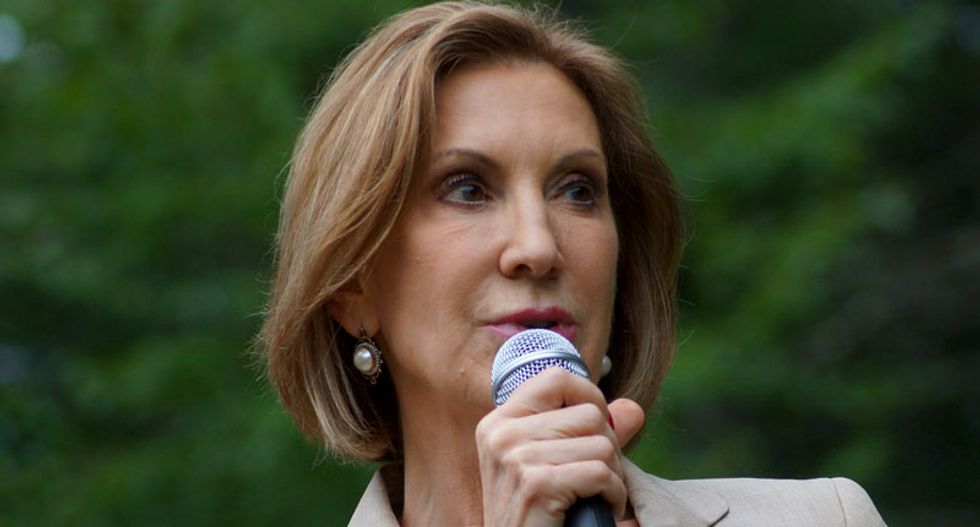 Carly Fiorina has been accused of “ambushing” a group of children, after she ushered pre-schoolers, who were on a field trip to a botanical garden, into an anti-abortion rally in Des Moines.

On Wednesday, the former Hewlett-Packard chief executive embarked on a day of campaigning across Iowa , in an attempt to boost her ailing presidential campaign.

The alleged ambush occurred when Fiorina hosted a “right to life” forum at the Greater Des Moines botanical garden. Entering the rally, before a crowd of about 60 people, she directed around 15 young children towards a makeshift stage.

The problem, one parent said, was that the children’s parents had not given Fiorina permission to have their children sit with her – in front of a huge banner bearing the image of an unborn foetus – while she talked about harvesting organs from aborted babies.

“The kids went there to see the plants,” said Chris Beck, the father of four-year-old Chatham, one of the children Fiorina appeared with. “She ambushed my son’s field trip.”

Fiorina has made abortion a central plank of her campaign, seizing on videos distributed by an anti-abortion group that purported to show staff members from the women’s healthcare provider Planned Parenthood discussing the sale of foetal tissue. The accuracy of the videos and of her claims about them has been disputed .

Beck, who lives in Ankeny, north of Des Moines, said he was not asked if Fiorina could interact with the children, or whether she could take them into her rally. He said the first he knew of it was when his childcare provider told him the children had encountered the candidate at the botanical garden.

“Taking them into a pro-life/abortion discussion [was] very poor taste and judgment,” Beck said. “I would not want my four-year-old going to that forum – he can’t fully comprehend that stuff. He likes dinosaurs, Teenage Mutant Ninja Turtles and Transformers.”

During the rally an anti-abortion activist, carrying a scale model of four-month-old foetus, joined Fiorina at the front of the room.

“This is the face of abortion,” the activist told the crowd as Fiorina looked on. The foetus model was sucking its thumb.

In answer to a detailed series of questions from the Guardian, a Fiorina spokeswoman said in an emailed statement: “We were happy that these children chose to come to Carly’s event with their adult supervisor.”

Fiorina’s day had begun inauspiciously. She hosted an 8.30am Coffee with Carly event in Guthrie Center, a town of about 1,500 people, 40 miles west of Des Moines.

The coffees were served in Prime Time cafe, on Guthrie Center’s high street. Outside there was snow on the sidewalks, slush on the roads. Inside were about 15 people, huddled in a dimly lit back room.

The crowd were seated at round wooden tables on a dark green carpet. They faced a banner carrying Fiorina’s campaign slogan: “It’s time to take our country back”. According to Fiorina, there are six steps to taking our country back. They include “standing for life” and “radically simplifying our tax code”.

A Carly Fiorina gift set had been placed in front of every chair. There was a small blue flyer and a large red flyer. Both talked of the need to “take our country back”. There was also a 50-minute DVD, Citizen Carly: The true story of Carly Fiorina, narrated by the actor James Woods.

Fiorina, who is polling at 1.5% in Iowa, spoke for about 15 minutes before taking questions from the audience. The crowd was elderly.

“When are we going to start doing big things again?” asked a grey-haired man, who said the country did big things when he was a boy.

The Guardian asked Fiorina about her recent comments about Hillary Clinton, the Democratic frontrunner and the only other woman in the race.

“What I said was that I enjoy spending time with my husband,” Fiorina said. “That’s a fact.”

It is unglamorous. It is hard work. There are no private jets flying Fiorina – or many of the other candidates – into airports. When the Fiorina bus leaves one event it drives straight to the next, along the highway, through town centers, subject to the same traffic regulations as every other road user.

If you follow one candidate for a day, as the Guardian did with Fiorina, you are likely to encounter their campaign bus on the road between events. Driving past the Fiorina bus – it is red and says: “It’s time to take our country back!” on the rear – it is strange to think that the next president of the United States could be sitting inside, staring out at the road or at the snow-covered fields.

The buses of higher-profile candidates usually roll up to side entrances, where their cargo is ushered inside by aides. Fiorina simply stepped out of her bus at each location and walked in through the main entrance.

On Wednesday, her plea to those attending her events was vague and somehow unambitious. “Send me out of Iowa with the wind at my back,” she said, time and again.

Whether Fiorina succeeded in wooing new voters, and attaining that wind, remains to be seen. She certainly managed to alienate one Iowan.

“I do not know enough about Carly to support her,” Beck said of the woman who introduced his son to the idea of terminating a pregnancy.

“And after today, she wouldn’t get my vote for sure.”