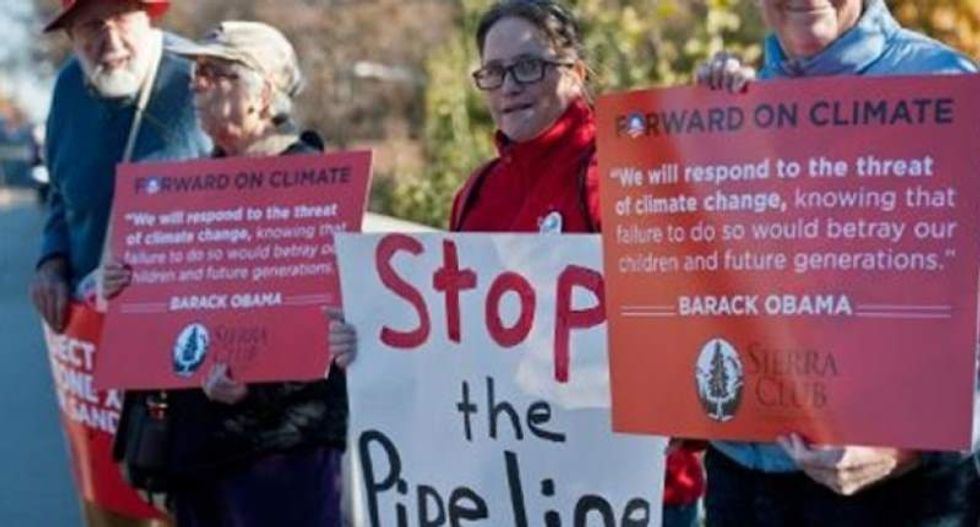 TransCanada launches two challenges as it argues president violated NAFTA, saying it is seeking to recover $15bn spent in push for pipeline’s approval

TransCanada Corporation said it was looking to recover an estimated $15 billions it spent over many years trying to win approval for the pipeline before Obama rejected the project last November.

“TransCanada asserts the US administration’s decision to deny a presidential permit for the Keystone XL pipeline was arbitrary and unjustified,” the company said in a release.

The twin legal challenges -- a lawsuit filed in a federal court in Texas on Wednesday and notice of intent to sue under provisions of the NAFTA treaty -- threaten to revive the longest-running environmental and political dispute of Obama’s administration.

It was far from clear, however, whether the suits would get the pipeline built, given record low oil prices and the election of a new government in Canada which is trying to set a more climate-friendly policy.

The company in a statement acknowledged the US had never lost a NAFTA lawsuit.

The US and Canada had hoped to open a new chapter on Keystone and climate change policy, with Justin Trudeau, the Canadian prime minister, due to visit the White House on 10 March.

Trudeau, though a supporter of Keystone, had promised a sharp break with the pro-oil policies of his conservative predecessor, Stephen Harper.

At the Paris climate negotiations last month, both countries teamed up in a “high ambition coalition” pressing for stricter temperature limits.

With oil prices falling to an 11-year low of $35 a barrel on Wednesday, many experts believe the Keystone XL project may no longer be economically viable.

The pipeline was designed to pump crude from the tar sands of Alberta across the US to refineries on the Texas Gulf Coast – but spent years in limbo after running into strong opposition from climate campaigners and Nebraska ranchers.

At the same time, Keystone XL became a symbol for Republicans in Congress of Obama’s willingness to resort to executive power to move his agenda forward.

TransCanada said in a statement that it had had every expectation that the project would be approved during the permitting process – and alleged that Obama’s rejection was swayed by politics, not the merits of the pipeline.

“The denial reflected an unprecedented exercise of presidential power and intruded on Congress’s power under the Constitution to regulate interstate and international commerce,” TransCanada said.

There was no immediate comment from the White House or State Department.

John Hoeven, the Republican senator from North Dakota who brought a bill to wrest the decision over Keystone out of Obama’s hands, said the president had ignored public opinion, and that Americans would be left footing the bill.

“The American taxpayer is now on the hook for potentially billions of dollars in fines and legal costs,” he said in a statement. “The president denied the Keystone XL pipeline permit, even though Congress approved it on a bipartisan basis.”

But Bill McKibben, the founder of 350.org, which led the protests, predicted TransCanada was unlikely to be successful.

“This isn’t going to get the pipeline built,” he said. “The idea that some trade agreement should force us to overheat the planet’s atmosphere is, quite simply, insane.”