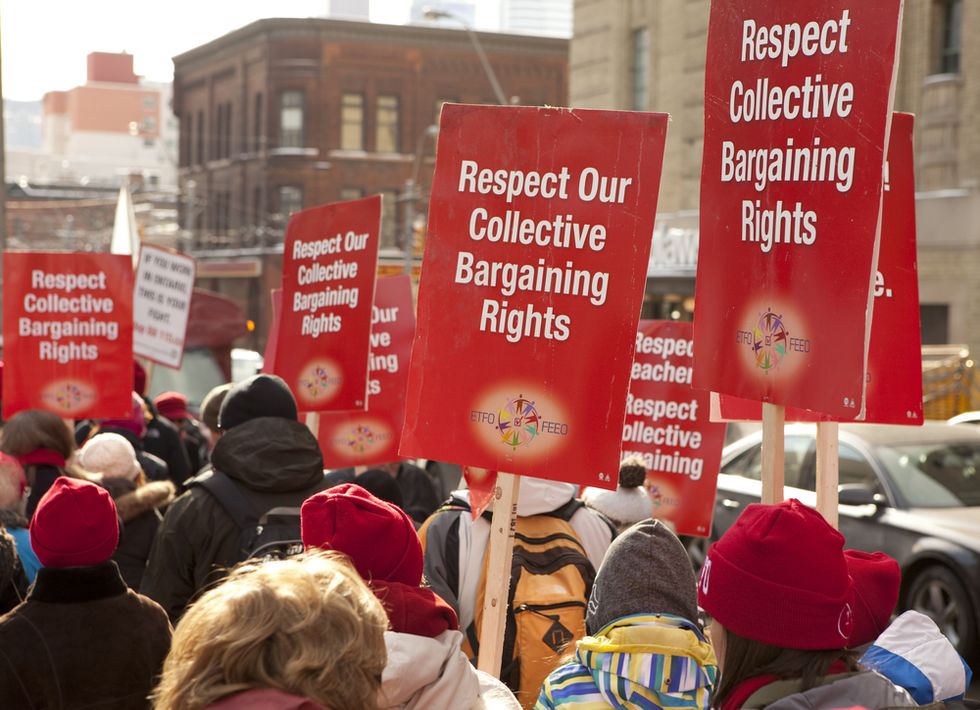 A “substantial” number of teachers from at least 40 schools in Detroit’s public school district will participate in a “sickout” on Monday, the Guardian has learned. The move for teachers to simultaneously call in sick, fuelled by frustration over large class sizes and “abominable” working conditions, could close nearly half the district.

Related: Detroit schools close due to teacher sickout in protest of education reform

Detroit teachers have recently staged numerous such organized mass absences from work, prompting closures at some of the largest schools in the city of 680,000.

State and local education officials have criticized what they call an “unethical” approach to raising concerns that they say hurts students the most.

Teachers say students are already devastated by conditions in the district, which is facing financial calamity with liabilities of $3.5bn.

Last week, nearly a half-dozen schools closed for at least one day due to teacher sickouts . On Monday that number could climb, according to two sources with knowledge of the plan who spoke to the Guardian.

It is unclear what impact the pledges will have on school closures, but such a large-scale demonstration could prompt the closure of nearly half the districts’ 103 schools, which include an estimated 47,000 students.

Conditions in classrooms are “abominable”, said Steve Conn, a teacher and former president of the Detroit Federation of Teachers who was removed from office for alleged misconduct in August. Conn has vowed to contest those charges .

“I’ve been a resident of Detroit for 30 years … my daughter grew up in the neighborhood, went to Detroit public schools, and the conditions increasingly, especially since 2007 with the financial crisis, have been awful,” he told the Guardian.

Another source with knowledge of plans for the demonstration said 90% of teachers at one school had voted to participate in the sickout. Organizers received “pledges of substantial participation” from teachers in at least 40 schools, the source said.

Detroit’s public schools have been a problem for Michigan’s governor, Rick Snyder, a Republican who ushered the city into the largest municipal bankruptcy in US history. Most observers agree the success of Detroit is contingent upon whether its schools can be fixed.

Snyder has made a $715m proposal to overhaul the failing district in 2016. It has so far received little support in the Michigan legislature .

Asked about the spate of sickouts, David Murray, a spokesman for Snyder, said: “Detroit children need to be in school. In addition to their education, it’s where many children get their best meals and better access to the social services they need. There are certainly problems that [need] to be addressed, quickly.”

Snyder’s plan would eliminate debt in the district that is equal to $1,100 per child, Murray said. That was “money that could be better spent in the classroom, lowering class sizes, raising pay and improving benefits”.

“We know that with the current debt figures if the issue is not addressed soon, Detroit public schools students will be losing [nearly half of the state’s per-pupil funding total],” Pedroni said, adding: “It’s unconscionable that students lose that to debt service.”

The problem with Snyder’s plan, Pedroni said, was that it relied on governing the school district with a board of appointees, not elected members. Since 2009, under a state-appointed emergency manager, the elected board has been effectively neutered.

“There’s currently a lot of debate over whether those appointees for the new Detroit school board [in Snyder’s proposal] would be mayoral appointees or gubernatorial appointees,” Pedroni said.

“But to me, really all of those are inexcusable because what I think we see happening in the district in Detroit is really an indictment of the sort of heavy-handed power from the executive branch without any checks or balances.”

Pedroni said this was similar to what has taken place in the nearby city of Flint. There, a state-appointed emergency manager has been alleged to have decided to use a local river as the city’s main water source. The move has been linked to an increased level of lead in household water supply.

When in 1999 the state first stepped in and overhauled the governance of Detroit schools, the district’s budget carried a million-dollar surplus. According to an analysis by the Citizens Research Council, a Michigan-based policy research group, in the most recent fiscal year the district reported a budget deficit of nearly $216m.

An estimated 41 cents out of every state dollar appropriated for students is spent on debt service, according to the council’s report.

“Despite being under the control of a state-appointed emergency manager since 2009, Detroit public schools, the state’s largest district, is failing academically and financially,” the report said.

Despite a depleted school enrollment, class sizes have increased and teachers have repeatedly taken pay cuts. Only one-third of high school students are proficient in reading,according to Snyder’s office .

Teachers say students are being judged unfairly. In an open letter to the Detroit public schools emergency manager, Darnell Earley, who blasted teachers for the sickout protestslast week, fourth-grade teacher Pam Namyslowski said pupils had been “set up to fail in every way”.

“We ARE [the students’] voice,” Namyslowski wrote . “We are on the front line, working side by side with them every day, trying our best to overcome numerous obstacles.

“In the winter, we often work in freezing rooms with our coats on with them. In the summertime, we survive with them in stifling heat and humidity in temperatures that no one should have to work in. We wipe their tears and listen when they are upset.”

Successes in the classroom typically go unnoticed, Namyslowski continued, as “most cannot be measured or displayed on a data wall”.

Detroit public schools officials did not respond to requests for comment.

A teachers’protest was planned to coincide with the sick outs, at noon on Monday outside the Fisher building in downtown Detroit.