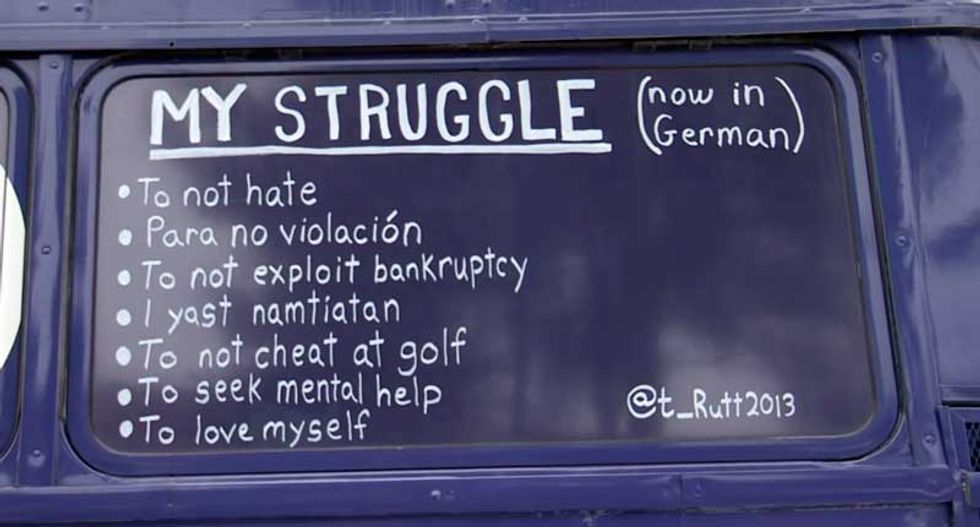 Philadelphia artists alter billionaire’s vehicle to present his slogan in Arabic, with stickers mocking his comments on women and Mexicans

The campaign bus was attracting funny looks. On its side was the by now all-too-familiar last name of the Republican presidential frontrunner. Somewhere inside the castle-shaped hotel next door, Donald Trump was holding court, as hundreds awaited another rally of bombast and branding.

Except, in the parking lot, the white block letters on the bus had been split up by a period, and so it read oddly: T.RUMP.

And then there was the driver, who was standing atop the bus, wearing a neon yellow windbreaker ... and swinging a golf club into a New Hampshire weekend afternoon.

The bus that once ferried Trump across Iowa is now a mobile art installation run by a group of Philadelphia-based artists who would prefer the real estate mogul stick to golf courses and skyscrapers, rather than come here with a win in his sails and momentum on the campaign trail days before the New Hampshire primary.

Hence the trick: before you stumble upon this kind of electric Kool-Aid acid test ride for these Trumpian times, the bus looks like it still might actually shuttle Trump from stop to stop.

“People come over and they’re all excited and they don’t even read that it says Make Fruit Punch Great Again,” said Mary Mihelic, an artist who is part of the anti-Trump bus project. “And they’re just totally taking pictures and then you’ll hear someone say, ‘Honey, it’s a gag! It’s a gag!’ And we just crack up.”

The tweaked slogan was inspired by a comment Trump made after the first Republican debate last year, when he appeared to suggest that Fox News anchor Megyn Kelly had asked challenging questions because she was menstruating.

At some of their own faux-campaign stops, the artists hand out red fruit punch for people to throw at the bus.

In Nashua, the artists displayed Trump yard signs covered black fabric made to resemble a burqa, a reference to his proposal to ban Muslims from entering the US if he were elected.

On the back of the bus, the artists wrote Trump’s actual motto – “Make America Great Again” – in Arabic. They also added stickers that read #womentrumpTrump and Hasta La Vista Donny, recalling comments the candidate has made about women and Mexicans.

Inside, the bus is littered with small remnants of Trump’s travels around Iowa: decks of cards and campaign bumper stickers and buttons. The artists tore out the seats in the back of the bus to create a space for voters to engage in political debates.

While Mihelic led the Guardian on a brief tour on Friday, David Gleeson, a fellow anti-Trump artist, stood up above.

“It’s a good day for golf in New Hampshire,” he observed.

It was Gleeson who was sent to buy the bus from a local dealer in Des Moines, Iowa, under the orders of t.Rutt, a Philadelphia-based artist who remains anonymous.

Trump had leased the bus for the summer, and as part of the agreement wrapped it in his campaign logo. When the campaign no longer needed the bus, the owner hoped to cash in on Trump’s enduring popularity and placed it on Craigslist for $15,000.

When they got a hold of Trump’s old ride, the artists found an extra feature inside.

“The bus used to be used as a party bus and the Trump campaign leased it from them, but they never removed the stripper pole,” Mihelic said. “So we’re kind of using that as kind of a metaphor for Trump.”

Trump’s campaign did not respond to a request for comment.

Cheney: Mike Pence is in 'discussions' with J6 panel about testifying

The vice chair of the House Select Committee Investigating the Jan. 6 Attack on the U.S. Capitol said staff have been in discussions about testifying.

"If there was an invitation to participate, I would consider it," Pence said in New Hampshire on Wednesday.

GOP Senate candidates are underperforming in multiple states, as the homestretch of the midterms approaches.