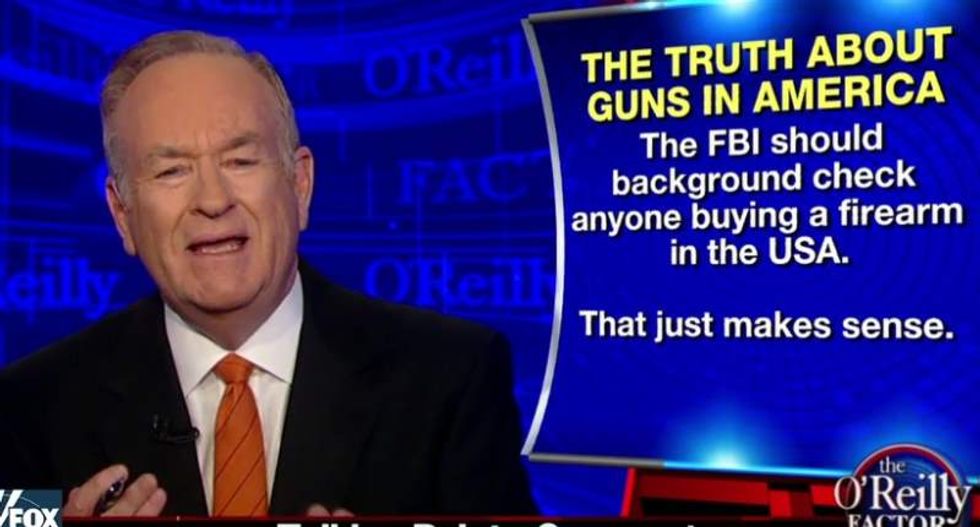 "The FBI should background check anyone buying a firearm in America. That just makes sense," O'Reilly said. "If you are paranoid and believe the government is stockpiling information so they can come to your house and take your guns, that's your problem -- your problem. But the government has an obligation to enhance public safety."

However, the Factor host also said that Obama's order tightening regulations for background checks on gun sales did not address "the bigger picture," arguing that gun crimes are committed by "hardcore criminals" or the mentally unstable, who were not likely to submit to background checks.

Unlike his colleague Andrea Tantaros, O'Reilly said he believed Obama was sincere in his desire to increase public safety. Instead, he argued that anyone convicted of using a gun while committing a crime should receive a mandatory 10-year sentence on top of their sentence for the crime.

"You simply can't leave sentencing to local judges if you want to control gun violence on a national level," O'Reilly said. "You can't do it."

He did not mention that there are already federal mandatory sentences in place for such offenses.

Watch O'Reilly's commentary, as aired on Tuesday, below.