Fox pundit: Oregon militia are not 'thugs' like black protesters because they fight 'government gone wild' 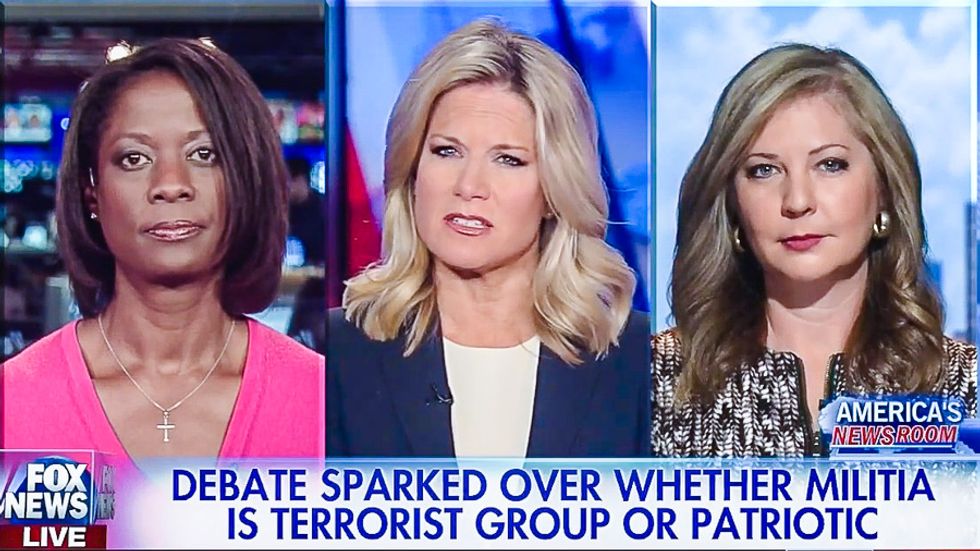 Conservative Fox News contributor Deneen Borelli on Monday said that armed militiamen were forced to take over a federal building in Oregon because the government had "gone wild."

Fox News host Martha MacCallum noted that the media had been criticized for giving the anti-government militia more favorable coverage than black protesters would receive if they took over federal property.

"Nothing like the left-wing media using an opportunity to really cloud the instance that's gone on in Oregon," Borelli complained. "What people need to understand, what's going on in Oregon, it is really an overgrowth of government, government gone wild is outreach of government."

In fact, the incident in Oregon was sparked after Dwight Hammond and his son Steven were given five year sentences for setting two fires on federal lands that they were leasing. Although arson carries a five year sentence, the Hammonds and their supporters have insisted that the convictions were unconstitutional.

MacCallum wondered if it was fair for the media to refer to unarmed black protesters as "thugs" while labeling the armed militiamen as activists without mentioning that they are white.

"What happened in [Ferguson, Missouri] is really outrageous because you had individuals who were very destructive, they destroyed property, they destroyed their community," Borelli opined. "We're looking at Oregon. Right now, these individuals are being peaceful, they are outraged about the overgrowth of government. It's government gone wild."

"We don't want to see this happen across the country," she added. "But this is an example of something that can happen because of the overgrowth of government. And Americans are tired of government intrusion in their everyday lives. And so, these individuals, right now, are peaceful, they want to rein in government gone wild."

"It's really outrageous how government is creeping into our everyday lives no matter what it is you're doing. And people just want to be left alone."

Attorney Jessica Ehrlich observed that there were ways for the militia to legally protest the government without illegally occupying federal land.

"We can disagree all day long as to whether you think they're overreaching or not," Ehrlich remarked. "But you don't go and take over -- in a non-peaceful way -- I mean, these people are armed... They're planning on staying, they've put a call out to other people to join them. And that's not a peaceful demonstration."

"These people are taking over an area that's a federal office building and that's not the way we make change in the United States."

MacCallum concluded the segment: "They think the rule of law is rigged against them in this case and they can't win by going through the normal channels."

'No other president has been harassed and persecuted!' Trump delivers angry rant at Hispanic Leadership Conference

During a recent speech at the America First Policy Institute (AFPI) Hispanic Leadership Conference in Miami, former President Donald Trump lamented the investigations against him, telling the audience that he's likely the most persecuted president ever.

"Just look at how every other president has been treated after they left office," Trump said. "They've been given all the time needed and complete deference when it came to their documents and their papers."